Food and drink in Uganda

Then God said, “I now give you every seed-bearing plant on the face of the entire earth and every tree that has fruit with seed in it. They will be yours for food.  And to all the animals of the earth, and to every bird of the air, and to all the creatures that move on the ground – everything that has the breath of life in it – I give every green plant for food.”   It was so. God saw all that he had made – and it was very good! 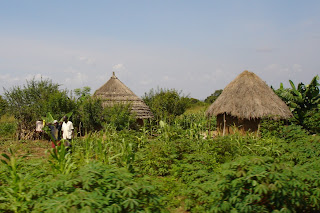 If you want to know what the Garden of Eden was really like, come to Uganda.

Uganda has a perfect climate: not too hot, not too cold, averaging about 26-28°C. Most of the country has plenty of rain.  And it is green, very green.

Everywhere you look there is food.  Small kiosks and stalls line the roads, whether in the towns or out in the countryside.  Everybody is selling food, so it seems, bunches of bananas, pyramids of tomatoes, mounds of sweet potatoes, huge branches of green bananas to make Uganda’s staple dish, matoke.

During the day there are family-run stalls selling matoke, beans and grilled sweet corn.  In the evening there are ‘pork joints’ and stalls selling chicken and chips.  Sometimes the 'kitchen' just occupies a small patch of pavement. 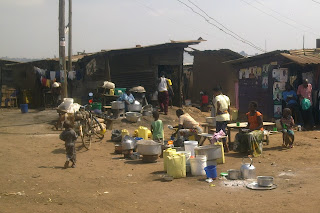 Here you can see the outdoor kitchens in the market at Namuwongo, a Kampala slum.  The large yellow containers are for water.  The large cooking pots balance precariously on small charcoal burners. 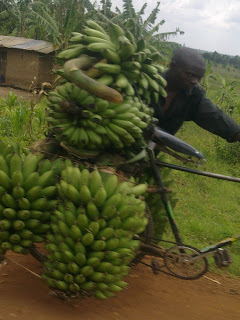 The roads are full of people transporting food, on foot, by bicycle and by lorry. 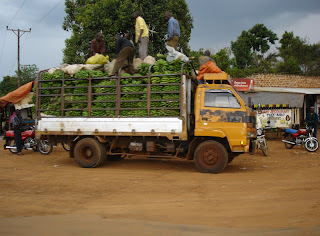 Uganda has enough food for its own people, in theory anyway, and is aiming to increase its exports.

Typical meals could include any combination of the following dishes, the ingredients all grown or reared locally.

Kampala and the larger towns like Jinja and Mbale have some excellent Indian restaurants, for Indians have returned to Uganda and run many of the businesses and factories.  In Kampala our favourites are Khana Khazana, the Coconut Shack, serving Goan food, Nawab in Garden City and, of course, Haandis (main restaurant on Entebbe Road, snacks in Garden City). Mamba Point has wonderful pizzas, as does Ciao Bella in Entebbe. Uganda does pizzas well, strangely enough, probably because the cooks as so used to using wood fired stoves.

When you’ve eaten all that, for dessert choose any of the following:

·       sim sim – sesame seeds either eaten ‘loose’ or made into sweet crunchy balls
·         sugarcane
·         chapattis – Indian or African
·         samozas, vegetable or meat
·         enormous doughnuts that fasten you to the ground for the rest of the afternoon and which Stuart
eats when he thinks I’m not looking
·      roasted sweetcorn to break your teeth on and ensure Ugandan dentists make a living.

Wash it all down with:

·         tea, served as ‘African’ tea i.e. flavoured gently with ginger or other spices,
made with milk and drunk with sugar (if you’re Ugandan), though it’s delicious without
·         good quality coffee, though often served rather weak
or as instant, with a flask of boiling water
·        a good range of excellent local lager beers – we haven’t tried the millet beer and may leave that
experience for later

Water, now that’s a topic in itself.  It looks as if Uganda may have difficulty reaching the Millennium goal to provide safe drinking water to all its population.  The water in Kampala is reasonably safe.  It is treated and you can use it to shower in and brush your teeth.  However, it needs to be boiled and filtered before you drink it.  Once that's done, the water tastes absolutely fine.  The filter is in two parts.  You pour boiled water into the top container where two ceramic ‘candles’ draw out the red earth and other contaminants. The clean water then flows into the bottom container, which has a tap. We boil up water for the filter most days.  It’s just part of our routine.

Most of the population in Kampala and other towns carry their water from standpipes which draw water from the national system or from local boreholes.  Stuart and I are fortunate in having piped water.  ‘National water’ is being piped across Uganda, but it hasn’t reached many rural areas, and is unlikely to, even by 2015.  Carrying water is usually a job for women and children, and one is never too young to do it. 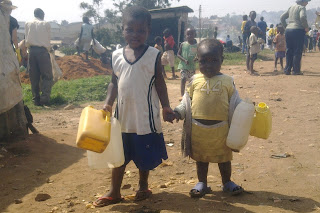 Large yellow plastic jerry cans can be seen everywhere.  We often see people loading a couple of dozen into boots of cars at the university standpipe.  Bicycles wobble past with twenty or more tied onto the seat. 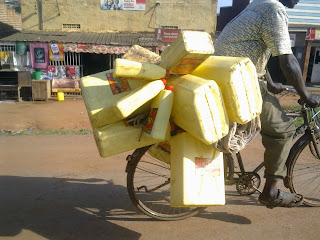 And if national water hasn’t reached your village or the standpipe is too far away?  Then you get your water from a convenient river or even from a ditch by the side of the road.  We often see children squatting in ditches or puddles, filling the family’s water cans.

So, is Uganda really the Garden of Eden?  Thirty per cent of its population is below the poverty line, yet you very rarely see the desperately thin children familiar from media stories about other African countries.  However, a significant proportion of children (20% of the under-fives), particularly in rural areas, are stunted, the result of poor nutrition, affecting their ability to learn and in a good number of cases leading to irreversible brain damage.  Some of the six-year-old children we see going to school look like British three- or four-year-olds.  ‘Stunting’ is one of the major concerns currently being aired in the newspapers. How can this be in a country which is able to produce so much good quality food?

There are several reasons for this.  Rural Ugandans are subsistence farmers. Even in Kampala you see little patches of vegetables beside the shacks, and animals being herded along the main thoroughfares.  As we drive through our own immediate neighbourhood, we see goats and cows, not to mention hens and turkeys and even the odd pig.  Yes, there are large plantations away from the city: of tea, sugarcane and coffee.  These plantations go back to the earliest colonial years when the crops were grown by forced labour for export to Britain.  However, most Ugandan families grow crops principally for their own use, just selling the surplus.  You see small stalls, or sometimes just bowls of produce left out by the side of the road, all over Kampala and other towns, as well as out in the country. 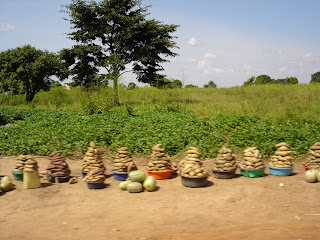 One significant cause of malnutrition arises when families who are engaged in subsistence farming sell their entire crop to pay school fees or expenses, leaving them with nothing to live on.  The government pays for children to go to primary school under the Universal Primary Education scheme, although it doesn’t, of course, pay for uniform or books or for the supplementary 'development fees' which schools often charge.  A similar system pertains for secondary pupils with the expenses, of course, being higher.  However, school is not compulsory.  The choice between food and education is a difficult one for families.  As a result Uganda, which made such good progress in introducing universal primary education, has been finding it very difficult to keep chidlren in school.  Many children may start school but not complete the full course through to the primary leaving examination.  Across the country as many as 70% percent drop out.  Another Millennium Goal which may not be met.

There is also real hunger – and emergency feeding programmes - in some parts of Uganda, for example the north and north east.  A terrible conflict which turned Ugandan again Ugandan consumed the north for more than twenty years.  At its worst, there were 2 million internally displaced persons living in camps, moved there by the government away from their houses and farms, terrified of returning to their homes because of the Lord’s Resistance Army.  Most have now gone back, but you have to be very confident that peace is going to be permanent if you are going to plant crops.  Large areas of the north have returned to bush.  VSO has a significant presence in the north, setting up training centres to help people develop new skills, including agricultural skills. And in Karamoja, a cattle-rearing area in the north east of Uganda, the rains have failed for the last three or four years.

So, the food is there, but not always in the right places, at the right price and for the people who need it most.  And a number of other social and environmental factors have an impact on supply and consumption. One current concern is the rapid population growth.

Kampala has been called the 'Garden City', but whether it's the capital of the Garden of Eden, I'm not too sure.

Posted by Elisabeth Ritchie at 9:04 PM