Well, we have now settled into our flat.  Link and VSO have done very well in finding us somewhere so comfortable and convenient for our work.  It is rather embarrassingly grand, especially in comparison to the wooden shacks at the end of the road.  However, it's nice and secure, being across from the 'Ministers' Village', and it's not far from the city centre. 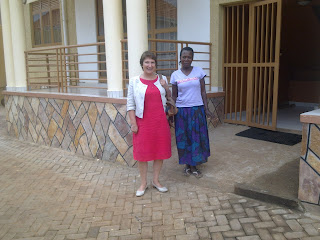 We have a lovely balcony which looks over flowering trees and green fields.  We hear birds singing and, in the middle of the night, the call of the muezzins from the three local mosques, none of which coordinates with any of the others.  And most things almost work. 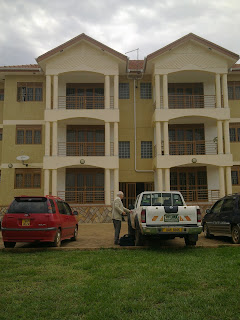 Our journey to work should take us about 10 minutes.  It took us an hour and a half this morning, despite yesterday's acquisition of the hot-off-the-press A-Z Kampala.  This is a wonderful book, its pages full of detail and with virtually every street named.  However, there are actually no street signs at all anywhere in Kampala, so we spent ages wandering up and down dirt tracks, in and out of markets, even through banana groves and maize fields.  Stuart did a fantastic job avoiding wilful goats, kamikaze hens, cattle with huge curved horns, energetic small children, reckless boda boda drivers, lumbering matutus, huge 4x4s driven by megalomaniacs, and wobbling bicycles loaded with sugar cane.  He didn't land us in the three-foot deep open drains or get us bogged down in the enormous muddy potholes which pepper Kampalan streets.  Boda bodas are motorbikes which carry passengers (from 'border-to- border', i.e. Uganda to Kenya).  They weave in and out of the traffic with little concern for the safety of their passengers or, indeed, of anyone else.  Uganda has the highest traffic accident rate in Africa, of which 70% involve boda bodas.  Matutus are 14-seater taxis (minibuses, really) which follow a set route.

Kampala's streets are often clogged with traffic, which did surprise us, though, as Stuart pointed out, it's not much different from queuing on the M8 - and a lot more interesting.  People weave in and out of the queues selling carefully arranged pyramids of passion fruit and limes, sunglasses and mobile phone top-up cards.  What is surprising is how few beggars there are, far fewer than in Edinburgh and Glasgow.  In fact we've only seen two so far.  Yesterday there was a violent thunderstorm.  When we left the supermarket where we had been sheltering, the roads were like rivers.  The 4x4s sent huge waves across the carriageways which threatened to destabilise the boda bodas and wash away any pedestrians.  The red silt spread across the tarmac and the potholes got even worse.

What we haven't told you about yet is our wonderful vehicle.  Eat your heart out, Chris!  It's a huge, and rather old, pick-up which we were told had been kindly fumigated for us before we took possession, to get rid of the cockroaches.  Stuart has really taken to it.  Nobody in Kampala pays any attention to road rules or etiquette, to rights of way, to traffic lights, or to the health and wellbeing of other road users or pedestrians.  The only way to drive in Kampala is NEVER to stop.  When joining a roundabout or going directly across the crossroads, you just keep going.  The pick-up is great for this and Stuart has got quite a taste for it. He relishes the power which goes with the truck, despite its ramshackle appearance.  I dread to think what his driving will be like once he gets back home! 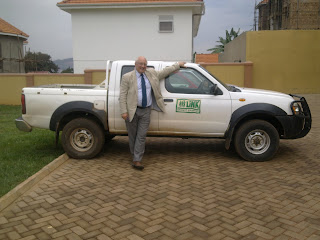 Posted by Elisabeth Ritchie at 5:43 PM