The Directorate for Education Standards is on the outskirts of Kampala, off the Jinja Road.   If you wanted excitement and stimulation first thing in the morning, you would turn left out of our compound, up the bumpy winding mud track, avoiding descending 4 wheel drives on the one side and three foot drops into drains on the other side, and emerge onto the Kira Road.  From here, you would slowly make your dusty way to the Jinja Road, one of the main routes out of Kampala, periodically swerving into the oncoming traffic to avoid the potholes, a feature of the city that gives Kampala “world leader” status, and the occasional, random and mountainous sleeping policemen (more like Arran’s Sleeping Warrior).  Saloon cars must tackle these at an angle if they are to avoid ‘beaching’ themselves. You would soon see the low tumbledown shacks of the Banda market strung out along both sides, selling second hand clothing, kitchen hardware, fruit and meat.  You would zigzag up a tiny winding road right in the middle of the market, avoiding smartly dressed students, boda boda drivers with death wishes, neatly turned out school pupils and ragged little toddlers. After several turns you would reach a T junction.  On the left would be the high gates of Kyambogo University (the ‘K’ pronounced ‘ch’), with armed guards and refreshment sellers clustered outside.  But we would turn right, past foul heaps of smouldering refuse, past the shabby little Muslim nursery, and into the narrow road that leads to the Directorate.

Today – and probably on most days from now on - we took a gentler approach to work.  We turned right out of our compound, bounced our way down the hill and followed the empty and peaceful Kigoba Road, away from the city.  We passed brand new villas, fields with tall red termite mounds and banana groves, and entered the University grounds by the back gate.  We wound our way along the wooded paths of the campus to wide open lawns with modest one-storey classroom buildings.  By the time we had made our way out the other side, we scarcely noticed the stinking rubbish heaps beyond the gates.  Having arrived at the DES building, we parked the pick-up gently in the car park and climbed the steps to the Directorate and the Link office. 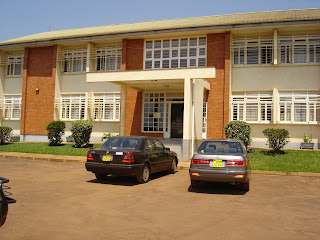 Last week, our new inspectorate colleagues were almost all out.  Today, however, school term has started and people are beginning to return.  Not our Link colleagues, however, who are either ‘up-country’ or out-of-the country.  Christine and Anita, who run the Link office, have given us such a warm welcome that we already feel at home.  Unlike Stuart, who is quite blasé about having his own office, I feel totally spoilt. Stuart and I are sharing the accommodation, which is spacious and airy, and looks across to one of the green hills of Kampala. 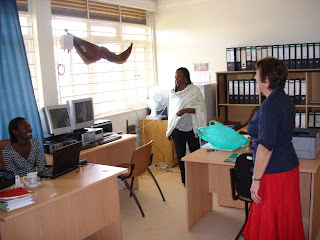 Our main duties so far have involved becoming familiar with the inspection framework and other documentation, sorting out our new laptops and attending a meeting of the centrally-based inspectors and the Director.  Of particular note was the decision to hold training sessions for district inspectors on Saturday morning.  Good thing the golf was arranged for Sunday afternoon!
Posted by Elisabeth Ritchie at 6:53 PM