A flash of colour below our front wheels, and two small pigs were miraculously whisked from a very messy death.  Driving a dilapidated pick-up truck along the rutted footpath thick with sticky red mud was proving a hazardous experience.  The owner of the pigs smiled broadly and waved.  Her curiosity about the two mzungos (white people) on their way to her children’s school seemed to outweigh, if just momentarily, the fact that they had so nearly removed her family’s main source of income.

Our wheels spinning, we skidded our way through the maize.  Then, all of a sudden, there we were driving right across the ‘playground’ until we juddered to a halt outside the headteacher’s office.  Children surrounded us on all sides, laughing and waving.  The flurry of our arrival was repeated several times over the next couple of days as we went from primary school to primary school with our Link and VSO colleagues.  Both NGOs have been a long-standing presence in the Masindi area.  We were visiting to see the impact they had made on the quality of education in local schools.

At first sight, the quality of the accommodation was much the same as it usually is.  We saw the familiar holes in the classroom walls and the lack of doors and windows, making them unpleasant and even dangerous places when it rains.

Some of the buildings had lost roofs or had even collapsed entirely. 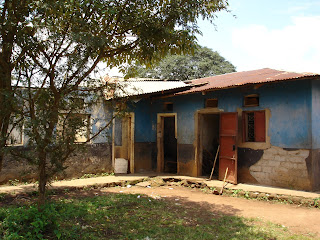 Only one school had a water supply.  The rest were dependent on rainwater, water the children brought to school with them or access to the standpipe in a local village, often half a kilometre or more away.  One had electricity in the headteacher's office.  The rest were without, and would be unlikely to get it for some time.  We didn't bother asking about ICT. Uganda's target is 20% of the country having electricity by 2015.  However, we also saw signs of recent improvements: a row of classrooms here, some new pit-latrines or a new water butt there.

And there were other signs that schools were trying hard to raise the standards of education they provided.   All the schools had boards outside the headteacher’s office indicating the attendance on that day. 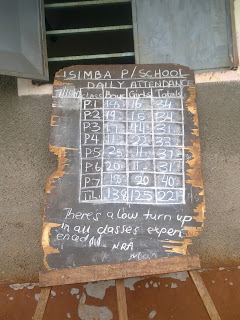 Attendance is a major issue in Uganda, for both teachers and children. Teachers may have second jobs or take time off to collect their pay from the bank, sometimes twenty miles or more away, a good distance if you are walking or cycling.  Children may be kept at home for chores like looking after siblings or animals, going to market, scaring birds or planting crops.  Or they may be sick with malaria, water-borne diseases or HIV-related conditions.
The teachers we spoke to talked about their attempts to persuade parents that regular attendance was important.  In one primary school, out of 963 enrolments, only 495 children were present.  At another, out of 400 children, only 179 were in school.  Mind you, it was pointed out to us by our colleagues, enrolment figures are not always accurate.  ‘Ghost children’ may boost official school rolls and therefore attract increased funding, not entirely unknown in Scotland!  And to be honest, as in Scotland, teachers must sometimes breathe an unofficial sigh of relief to have a rather lower class size on the day, though in Uganda the differences may be between the 200 P1 children officially enrolled and the 68 actually present in class.  The publication of attendance on blackboards is an important step in recognising and dealing with the issue, and raising awareness within the local community.

We were impressed with the sense of commitment to children and desire to do a good job shown by both promoted and unpromoted staff.  Link and VSO volunteers have expended considerable effort on running curriculum workshops and helping schools develop improvement plans.  To be honest, we drew a blank at actually laying our hands on any bits of paper.  However, we could see pretty good evidence that improvement was planned and, we were reasonably sure, taking place.  Sometimes the evidence was on the walls. 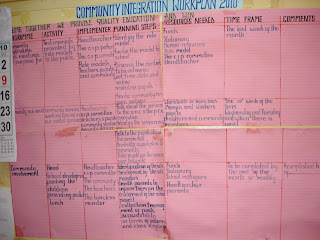 In one school, the depute admitted that only the headteacher knew where the improvement plan was.  Needless to say, the headteacher was absent, as in virtually every school we have visited since we arrived!  However, the depute was able to tell us about the school’s priorities: reducing child labour, improving the attendance of both children and teachers, reducing school dropouts, improving the assessment of learners’ progress and developing better links with the community.  This final priority, of course, underpins all the rest. 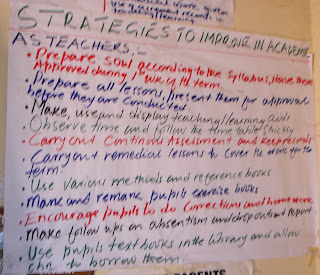 The issue of dropouts is an interesting and challenging one.  A lot of girls stop attending school in P6 and P7, because of the impact of sexual abuse, the prioritising of domestic chores and/or early marriage.  Many children of both sexes drop out because of poverty or lack of motivation.  The curriculum is heavily geared towards rote learning of factual information for the Primary Leaving Examination (PLE).  The dropout rate quoted can be as high as 50%, with about 30% of children on average sitting the PLE and about 25% passing.  Not only are the syllabus dry and the classes far too large, it is also difficult to prepare for the exam if you have no books.  We heard that some schools may charge parents 1000 shillings or so every month for practice papers (about 35 pence), well beyond your means if you are a subsistence farmer.  Not only do the high dropout rates prevent universal primary education (UPE) becoming a reality, they also threaten the implementation of universal secondary education.  Children enter secondary school on the basis of a pass at PLE.  It is also an entry requirement for many jobs.  If children don’t get as far as P7, they have lost the opportunity to sit the PLE unless they return later on.  Uganda has banned repeating of classes, so the extent to which children have mastered the curriculum so far and learnt the necessary skills to progress can vary very widely across any particular class.  The school day is long, from 7.30 or 8am until 4.30 (for younger children), 5 or even 5.30.  Children walk long distances to get there.  Sometimes it is just easier not to go to school.

Uganda is in the middle of a major curriculum review.  We will be giving the details of this for those of you who are interested, in our LTS blog on Glow, the link for which is at the top of the column on the right.  So far, the most significant changes have been in P1-P3 where a thematic curriculum is now being implemented.  One of the most controversial aspects of the new curriculum at these stages is that it is delivered in children’s local languages rather than English.  Uganda recognises 56 local languages within its constitution, a figure increasing to 60 or 70 if you take local variations and dialects into account.  About 40 of these languages do not yet have a written form, so Language Boards across the country have been set up to select, define and record language forms within dictionaries and elsewhere.  Of course, that still doesn’t solve the problem as school children need access to textbooks and other reading matter which have not yet been written.  Another major challenge for a country with little money to spare.  Other complexities include the fact that some areas have more than one local language, particularly if internally displaced communities from the north have been relocated there.  And of course, in middle class areas of a city like Kampala, children are almost always fully bilingual, with English being to all intents and purposes the ‘local’ language.   In the latter case, of course, English will probably be used from P1, and it may also be used in the former case where its adoption helps to defuse potential tensions among language groups. 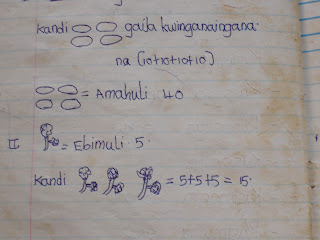 So very significant national developments are taking place at the moment, almost always supported by international aid (most commonly from the World Bank, UK, USA, Ireland and the Netherlands).  And the NGOs are doing their bit too, which brings us back to Link and VSO.  We saw a good bit of evidence of the impact of Link’s Global Teacher initiative. 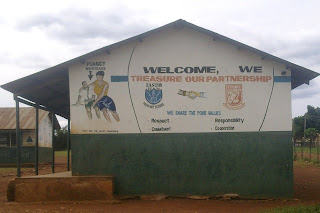 In some cases, UK teachers had worked in Ugandan schools, and vice versa, sharing practical learning and teaching approaches, in particular, active learning and learning games.  Sometimes, partner schools had raised significant amounts of money and had helped to make concrete improvements.  For example, we saw pit latrines built specifically for girls, ‘tippy taps’ (which enable children to wash their hands even if there is no running water), school desks, coloured markers and pencils and inflatable globes, all funded by children, parents and staff in UK schools.  They had made a real difference to the school experiences of Ugandan children, both in and out of the classroom.


Just one word of caution, though.  There is a danger of cash-strapped Ugandan schools focusing on financial benefits and material improvements which can be difficult for schools in less privileged areas of the UK to provide.  Poor though Ugandan schools are, partnerships should, above all, be about sharing professional skills and developing the awareness of global issues among children in both countries.  Our children would be quite surprised by the degree of responsibility expected of Ugandan children.  From the earliest years, they clean their own classrooms and may have significant duties such as keeping the school grounds clean and tidy.

I think some Scottish parents would, however, baulk at the prospect of their P3 offspring being responsible for ‘slashing’ the grass on the playing field!  I hope the teachers count all the fingers and toes at the end of lunchtime! 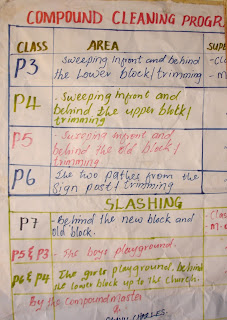 We were very pleased to be able to visit a school which acts as a model to other local schools.  It has benefited from its status as a factory school and from its links with an English primary school.  Headteachers in all the primary schools we visited in the Masindi area regularly observed classes and advised teachers.  In this school, expectations were particularly high.
Classes were still large, though, a combination of the effects of UPE and the school’s attractiveness to local families beyond those employed in the factory.  I counted 80 or more in a P6 class and there were 117 in each of the nursery classes.  Books were still in short supply – one between four.  In other schools, there had been no books at all in most classes.  And the teachers we saw were trying to encourage children to think for themselves.

We saw evidence of some creative approaches, for example the use of display in the classrooms (sometimes using sugar sacks), and, more striking, exhortatory or informative paintings on the gable ends of the school buildings. 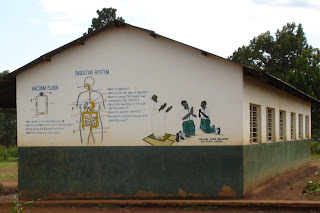 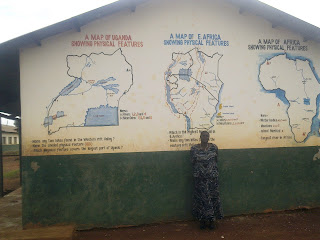 So, we came away from the north-west acutely aware of the very significant challenges facing all these schools.  However, we were also impressed by the efforts which were being made to make the best of whatever resources were available.  Most of all, we were impressed by the pupils.  These bright, lively young people deserve only the best. 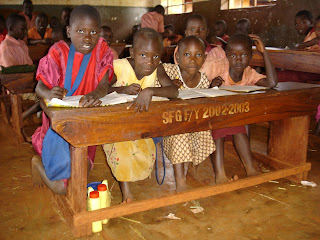 Posted by Elisabeth Ritchie at 8:47 PM