Africa is a continent of small traders, and no country more than Uganda.  Indeed, Kampala itself is really just one huge village.  Everywhere you walk or drive, someone is making a living out of selling something, no matter how trivial or worthless to a western way of thinking.  As you sit in traffic jams in the capital, along come the young men selling half a dozen hand towels, a box of Scrabble or three educational posters.  Busy commuters pick up their pre-shelled peas or ready-peeled sugar cane.  Who knows, right in the middle of the suicidal dodgem ride otherwise known as the Jinja Road, they may suddenly decide they need a saucepan, a mosquito net or a thermos flask.  And upcountry, when the long distance buses pull into isolated trading centres out in the bush, hands reach up with kebabs on canes, bags of salted groundnuts or bunches of bananas.

How do all these vegetables, handcrafts and, to be honest, often meretricious junk make their way to the city markets?  Well, as in the UK, the junk probably comes from China.  As for the rest, when we turn onto the busy Port Bell Road we see the matatus disgorging passengers from outlying areas, each hoisting their baskets of bananas or cabbages onto their heads as they weave their way across the traffic to the busy Nakawa market.


Lorries, boda bodas and even bicycles struggle along loaded with bunches of matooke (green plantain) or the sacksful of charcoal, last sad remnants of precious rainforest, which are used to fuel the little stoves which cook it. 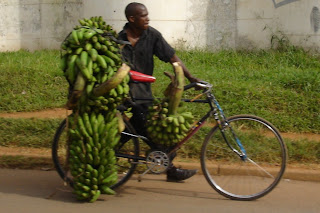 And where is all this produce sold?  Traders are everywhere.  The lucky ones operate from the ramshackle kiosks, rickety stalls, disused containers or tiny purpose-built shops which line every street. 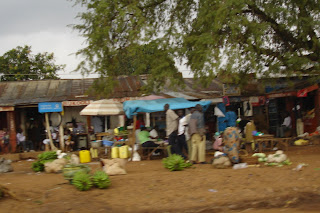 Everyone else makes do with a patch of shade under a tree, or a corner of dusty pavement.  The young, who have the energy and persistence to trudge the dusty roads, dip in and out of traffic queues and dodge speeding boda bodas to sell their wares. 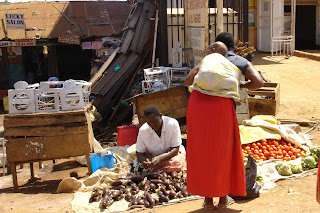 Hawkers tramp the streets bedecked with brightly coloured sheets and dusters, or wheel crazily-laden bicycles hung about with merchandise. 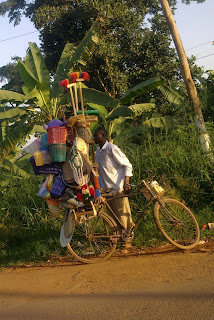 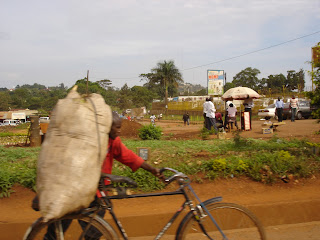 It is surprising what you can get on a bicycle.  Once you have bought your ironwork door or your bed from the roadside workshops, you just load it onto your bike and off you go.  We have seen roomsful of furniture piled to dizzy heights on the backs of bicycles – easy chairs and chest of drawers tied together and strapped to the seat, their owners aspiring to new social heights.


My favourite was the coffin strapped at right angles across the seat and wheeled at funeral pace along a dusty baked earth track on an unmarked road near Masindi.  Not even I was brazen enough to take a photo.

And if you have nothing to sell, and quite probably nothing to eat, landless in a country of broad horizons and fertile green pastures, then you just settle down by the edge of the road, in country or city, and plant your crops.  Little patches of maize cluster along Kampala’s dusty rutted streets.  However, the most common horticultural sights are the neat rectangles of decorative plants which passers-by purchase to brighten up their backyards in between the jack fruit trees.  For Kampala is the Garden City, after all. 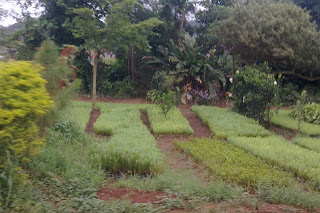 Alas, the supermarket has reached Uganda, though.  Huge tasteless shopping malls and small family-owned businesses cater for those too tired to bargain and willing to pay the set mzungu prices.  Here the aisles of Ugandan groceries are infiltrated by over-priced Italian or American canned goods and lurid Kenyan plastic ware.   And to advertise their goods, the hoardings scream at you, sometimes making claims or urging products on you that have long since been banned from British streets.  Following the global campaign, Nestle’s baby milk may no longer be as widely advertised, but local manufacturers are not so cautious, making their own contribution to infant malnutrition. 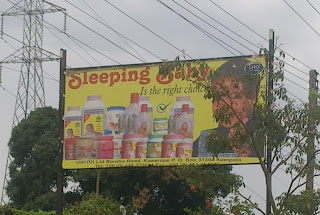 There are other causes of malnutrition as well, of course.  One of the headlines in today’s Daily Monitor was ‘Paradox of hunger amidst plenty’.  The article was about the western district of Ankole with its milk, beef and poultry and ‘gardens, plantations and markets…bursting with mounds of matooke, fruits, cabbages, Irish potatoes and carrots courtesy of good climate, soils and hard work.’  Forty per cent of children under five in the area are chronically malnourished and stunted, a figure which rises to 50% in the south west.  The causes?  Partly ignorance and the poor diets of pregnant and breastfeeding mothers resulting in failing breast milk.  Also, mothers copying ‘child feeding methods which are not appropriate’.  Blame those baby milk hoardings which line every road in Uganda.

However, the writer also ascribed responsibility to the traders.  Those bananas, millet, beans and groundnuts are not consumed within the Ankole households but are put aside for selling while the children eat a diet comprised almost solely of matooke.  The twenty first century is a cash economy, and the only way to get those precious coins is to sell what you produce.  There are moneylenders to pay, school fees overdue, too little land and not enough jobs.  So you trade away your children’s food. 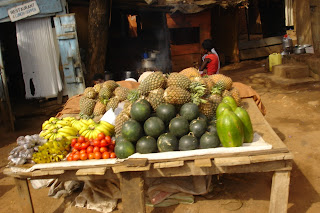 Posted by Elisabeth Ritchie at 6:37 PM