‘What have you done today to make yourself feel proud?’ goes the ‘theme’ song of The Journey to Excellence, familiar to those of you in Scottish education.

For most of us, the answer would be ‘precious little’.  For the children of Mutungo, close to the port area of Kampala, the idea that they would ever have anything to be ‘proud’ of would, until quite recently, have been empty dreams.

Despite its grandiose title, Royal Pride Academy is a school for some of the poorest families in the city.  Living in the Mutungo slum area does not give you the best start in life.  Its ramshackle dwellings are built around a swamp and joined by winding paths of hardened mud.  Piles of garbage collect on open patches of ground.  While some more substantial houses are being built, most houses are cramped and in poor condition.

For the last six years, the low wooden buildings of Royal Pride Academy have provided nursery and primary education for about 200 children.  It’s a community school, provided by parents and well-wishers, and operates outside the government and district structure.  It shouldn’t really exist, and it certainly shouldn’t need to exist.  Uganda has universal primary education, and education should be free for all children of primary age.  Indeed, the Mutungo area has two government schools, but two are nowhere near enough.  There just aren’t enough schools.  What makes it even more difficult for parents is that, like almost all schools in Kampala, these schools charge unofficial ‘top up’ fees.    Such fees can amount to at least 30,000 Ugandan shillings - £9 or so - per term, little enough by our standards but way beyond the means of most of the local families.  So, until Royal Pride was set up, many of the children in Mutungo did not go to school.

The school was the inspiration of Godfrey, a trained teacher who is now the headmaster, and his wife and another teacher.  Godfrey himself had been brought up in desperately poor circumstances in Namuwongo, the subject of one of our recent blogs.  His family had been unable to pay for any education for Godfrey or his siblings.  One day a member of a local church found him and one of his sisters scavenging through a rubbish heap and offered to pay for them both to go to school.  That simple act transformed his life.  Godfrey decided that he would pay back that debt by helping others just as he had been helped himself.

Royal Pride has to charge fees to keep itself going, but only claims them from those who can afford it.  Fees range from five to 30,000 Ugandan shillings per term (3,500 shillings is about £1). Many of the children, for example, those who are orphans or from families with very limited income, do not pay anything. Quite a number of the children come from families affected by HIV/Aids, or may, indeed, be HIV positive themselves.  A number of them are brought up by grandparents, who may be responsible for bringing up a number of children, and may be in poor health themselves.  The teachers receive very little pay but are highly committed, often coming in to provide extra teaching in the school holidays.

Despite its very limited resources, the school has had a notable impact on the local community, providing a service beyond just schooling, an relatively unusual concept in most Ugandan schools, and one which reflects its motto: ‘Education with a difference’.  And the community, in turn, provides what support it can.  A local farmer, now chair of the school management committee, provided the land on which it is built. 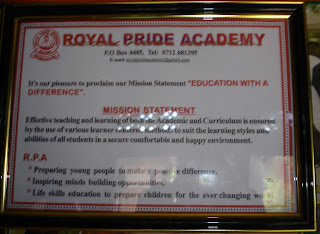 So, what has all this got to do with Stuart and me?

You may recall from an earlier blog – the Namuwongo clean-up - that VSO volunteers engage in projects beyond their formal work, as part of their cluster activities.  The family of one of the volunteers has been providing support to Royal Pride over the last year or so, through getting involved in school activities and, with their wider circle of friends and family, providing some material support such as books and playground equipment.

One of the priorities for Royal Pride has been improving the accommodation.  The proximity of the swamp has meant that the classrooms were full of mud and the roof leaked badly so the classes were often disturbed or had to be cancelled. You may recall that Uganda has a lot of rain.

These poor conditions spread disease to children who are already vulnerable. Our colleague and his family raised some funds from the UK and put in some solid foundations, which elevate the classrooms above the mud.  The next stage was to build the walls, around the existing ones, and finally to provide a roof.  This work is close to completion.  The accommodation will still be very modest, but it will be a considerable improvement.
Where our VSO cluster came in, is that last Saturday we helped with some of the painting.  Parents had made desks out of recycled wood which needed to be sanded and painted.

And the old tyres which children play on during breaks were also looking a bit shabby and needed to be brightened up.  So it was on with the Marigolds again! 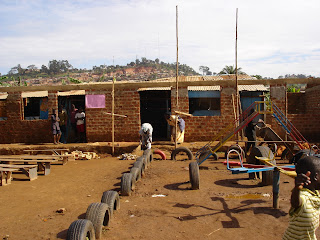 It was a wonderful day.  Parents and other members of the community worked away on the building while we splashed paint around with the help of the children. 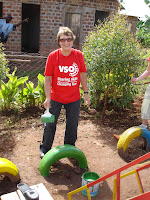 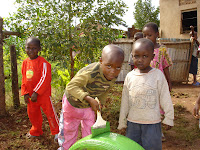 And how much brighter everything looked by the end of it!  The children slaved away and, with all of us working together, we transformed the physical appearance of the school. 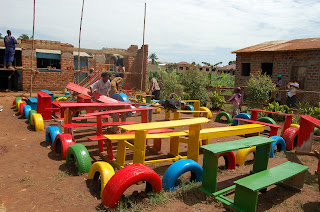 There’s still a lot to be done and the resources remain minimal by British standards, but the sense of community spirit was superb.  And what is more, the children can look around and feel that they and their education are valued.

I think every single one of us there that day would have been able to give a resounding answer to the question, ‘What have you done today to make yourself feel proud?’.

We hope you like the photos.  There are more below.  Some are ours, and some were kindly contributed by our neighbour Romaine, also one of the VSO crowd.

Posted by Elisabeth Ritchie at 9:05 PM