The expression ‘celebrating success’ is used rather glibly these days in educational circles.  In fact, it’s the kind of banal statement that I used to cross out ruthlessly when editing inspection reports.

However, sometimes you just have to eat your words.  Saturday was one of those occasions.  First came the invitation: to Royal Pride Academy’s Official Opening of its new building and Graduation Ceremony for the Nursery Class.  The invitation itself was splendid.  The last time I received anything like it was for a royal garden party at Holyrood House! 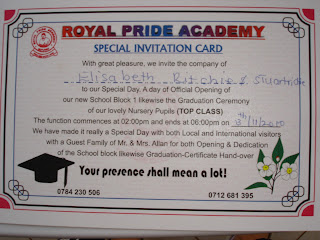 And indeed, it was a right royal occasion.  Whereas most royal events make do with one national anthem, we had three anthems altogether: one for the Republic of Uganda, one for the Kingdom of Buganda and one for Royal Pride Academy itself.  Hands on hearts, singing away fervently the children did the school proud.  And they themselves had a lot to be proud of, as had their parents, the headmaster and staff and the local community who have supported the school from its birth in a small wooden hut half a dozen years ago. 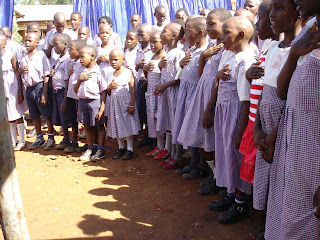 The school playground was decorated in royal blue and purple, toning in tastefully with the school uniforms.
Parents had made great efforts to turn their children out smartly, with most wearing shoes and socks instead of the usual flipflops. 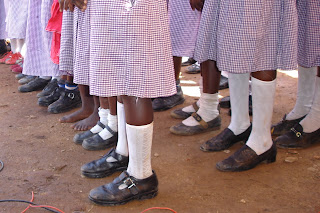 A number of ill-fitting shoes were clearly begged or borrowed, while some children had gone to enormous lengths to appear well shod.
And what talented young people they are!  After the school choir’s impressive rendering of some local songs, we were entertained by the nursery pupils whose action songs and dances were a delight. 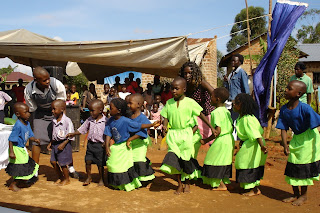 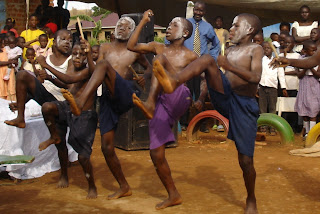 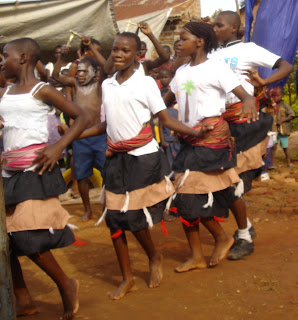 All the pupils, whatever their ages, impressed us by their self-confidence.

It was wonderful to see the pride of the parents, many of the mothers coming up to the performers to press sweets or small coins into their hands.

Royal Pride is, of course, a community school and parents and well-wishers were there in force.  Speeches always play an important part in any Ugandan occasion.  The Official Opening was no exception.  The speeches were addressed directly to parents and delivered in Luganda with simultaneous translation into English for those of us with inadequate language skills.  They pressed home key messages to parents about education, health and raising aspirations.  Speakers stressed the importance, for example, of providing children with food during the school day.  Parents were told of the books and resources which had been donated to the school, how they should be looked after and the importance of returning them if they were ‘inadvertently’ or legitimately taken home.  Supporters offered to sponsor some of the children whose families could not afford school fees.

HIV/Aids is a major issue for Uganda in general and for the Royal Pride community in particular.  We were, however, a little surprised by the subjects of the plays: circumcision, Aids and the impact on children of family breakdown, all enacted by twelve year olds with great gusto.    However, the issues such plays deal with are absolutely relevant to these young people’s lives.

We thought the fashion show was wonderful.  Never have such elegant costumes been fashioned from newspaper and brown paper, and modelled with such poise and presence. 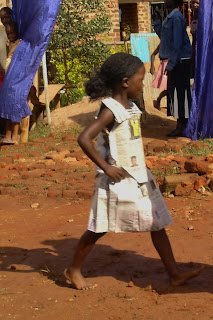 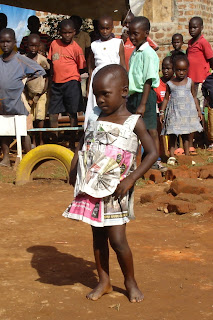 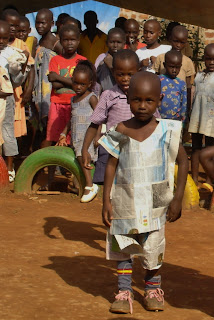 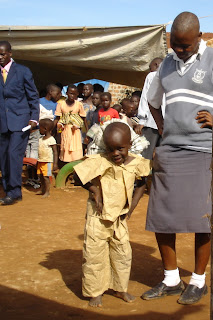 The unveiling of the plaque was very moving.  VSO couple Alan and Alison Cowan and their family have made a long-lasting impact on the children of Mutungo through their personal support and mobilisation of family and friends back in the UK.  They are returning to the UK this weekend and will be sadly missed.

There is still a lot of work to do, of course.  More classrooms and proper sanitation are needed.  The school still has no water or electricity on site and virtually no secure storage.  The staff are doing an amazing job with almost nothing, but children need books and other resources if they are going to learn.  Members of the local VSO cluster will continue their interest in the school, and some of us may try and provide some 'hands-on' help.  I may write a bit more about this in a few days’ time.  However, the theme of the day was celebration for what had been achieved so far.

The highlight had to be the graduation.  The importance of learning and education ran through the entire day, as it should.  When it came to the nursery class receiving their certificates, the uncomfortable mzungos were all forced out of their seats and made to stand around the presentation area.  The headmaster was quite explicit about the reason for this.  We were there as examples of professional achievement.  We were doctors, teachers, speech therapists, nurses.  He told the children that they also could achieve.  They too could become educated, could learn and practise professional skills.  The implication was quite clear.  In the future, at a graduation ceremony similar to Saturday’s, the models and mentors would not be mzungos.  They would be the adults who had grown up and been educated there in Mutungo, at Royal Pride Academy.

Posted by Elisabeth Ritchie at 7:45 PM