A slight sense of muddle seems to pervade Uganda. Nevertheless, it is quite unusual even in this country for a town not even to be certain of its own name.
To be sure, the name Fort Gerry does not really have an impressive ring about it, although the original fort, now the site of the golf club, occupied quite an imposing position above the bustle of what used to be called the ‘native market’. Certainly, its subsequent name, Fort Portal, sounds rather grander, though it doesn't really deal with the muddle. The plaque underneath the rather grotesque statue of Sir Gerald Portal after whom the town was named claims that he was a Major. No he wasn't. He was the British Consul in Zanzibar, several hundred miles away off the Tanzanian coast, and not only did he never brandish a weapon in anger, he never once set foot in Fort Portal.


One suspects, however, that the golfers in the Toro golf club are not overly concerned by historical niceties. Their only frissons of danger come from golf clubs brandished at dawn. 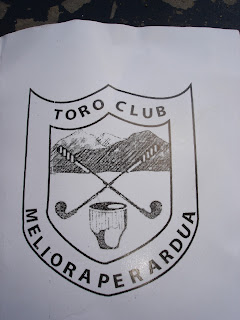 Theirs is probably the only club house in the world which has a Latin motto and a moat.

Certainly it makes a nice change for the British to build a fort to protect the local inhabitants rather than bombard them. But the British weren't really that compassionate. They were playing the game at which they excelled, even more than at golf, the old game of divide and rule. In the bloody tit-for-tat between the two kingdoms of Toro and neighbouring Bunyoro, they came down on the Toro side. The king of Toro signed away his birthright to the British and in exchange his colonial protectors set up a string of forts around the Toro kingdom, of which Fort Portal was just one. When the current king took over 17 years ago at the tender age of three, a very similar scenario was played out. ('Enough history’, says Stuart. ‘What about the golf?’)

The golf course is quite stunning, with mature trees lining the long sweep of the fairways and the Rwenzori Mountains hovering in the distance. The fact that there are only nine holes certainly encourages the non-golf-playing partner to hope that the promised gin and tonic is at least within reach. At first sight it looks as if the only other players are the four foot high marabou storks. At second sight, something strange seems to be occurring. Can it be muddle?


Now, anyone who knows anything about golf knows that it is rule-ridden. People who shilly-shally don’t play golf. ‘Muddle’ is an unknown concept. Flexibility and responsiveness? Absolutely not. Rules, regulations, rigid etiquette: golf has them all.

Not, however, in Fort Portal.


It is certainly generous of the Toro golfers to share their course with the occasional cow. And the route across the course from the main road to the market makes perfect sense to shoppers. However, when it comes to the doubling up of the nine holes into the requisite eighteen, something seems to go dangerously wrong. Golfers, those most rule-bound of people, criss-cross the fairways at will. If you are playing the first while others are playing the ninth, then you share the fairway. While you amble down the fifth, up comes the party playing the eighth. Not to mention the fact that the first is also the tenth, the fifth is the fourteenth, the eighth is the 17th and so on. Makes sense, saves effort and deals with Uganda’s over-population all at the same time. All you need to do is duck as the missiles come flying over. It is a fort after all. If you’re not quick enough, then that’s your problem. Survival of the fittest is one of the oldest rules of all.


Did I mention the Rwenzori Mountains, that long spine which separates Uganda from Congo, snowy peaks to the south, gentler foothills further north, near Fort Portal? It is the highest mountain range in Africa. Its highest peak is Mount Stanley (5,110m). Only Mounts Kilimanjaro and Kenya are higher. By the way, 85% of Uganda lies between 900 and 1,500 meters above sea level, hence the pleasant climate even though it's on the equator. ('Enough education,' says Stuart.)

The Rwenzori Mountains serve a greater purpose than background scenery to the golf course. The source of some of Uganda’s best spring water rises on those mountains. 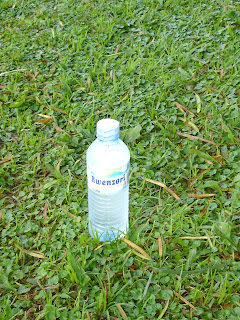 Its foothills produce some of Uganda’s best tea, long green slopes which look uncannily like Sylhet, with the tea pickers carrying the same wickerwork baskets on their backs as they do on the Indian sub-continent.

Some of Uganda’s best coffee also comes from Rwenzori. The English translation of Rwenzori gives us the wonderfully named Mountains of the Moon University. And you drive along the great Ugandan Rift Valley at the northern end of the Rwenzori mountains to reach the Semliki National Park.

First you follow the bumpy narrow murram road high above the Valley, the slopes terraced right to the top like very green versions of southern France. A new road is being built to replace it, whether to bring more tourists to Semliki or more minerals from Congo, who knows, and better not to ask.

And then suddenly, from the first of several bends you look down and there stretches the great plain before you, the lazy silver curves of the river marking the border with Congo, and mile after mile after mile of dark dense forest extending to every horizon. You zigzag down and before you know it, you are within its depths.

We spent a wonderful couple of hours with a forest guide who pointed out the different types of trees and the birds and animals which abound in this area of Uganda.


After emerging into a forest clearing, we followed the trail to the hot springs which bubble away in the middle of the swamp deep in the forest. Two sets of springs, very handy, one for men, one for women, where local clans still carry out their traditional rituals.

The water boils at different temperatures in different parts of the spring and one of the highlights is to boil your own lunchtime eggs.
Back into the trees you plunge and immediately you are surrounded by the mysterious calls of birds and animals high up in the trees, odd rustlings in the undergrowth and quiet swinging movements from branch to branch.
Down below, baboon families lope through the undergrowth. A leisurely stretch and then they too swing themselves effortlessly and gracefully up to the higher branches.


The human interlopers bumble clumsily back along the tracks, hot and sticky, careful to avoid the soldier ants which cross their paths. Back in the clearing, they clamber into their four-wheel drives and off they go. The local inhabitants breathe a sigh of relief and settle back down to their evening routines. Not much muddle here. After all, unlike the golfers, they've been practising their swings for thousands of years.

Peace and tranquility in the Toro-Semliki Wildlife Reserve

A symbol of Uganda by the shores of Lake Albert

Posted by Elisabeth Ritchie at 3:36 AM