Learning at the foot of the Rwenzori Mountains

Last Wednesday was a Red Letter Day.  We were back on the road again!

For the last few weeks, since our antiquated pick-up almost blew up, we have been languishing in noisy hectic Kampala, feeling thoroughly frustrated.  If our work with the inspectorate is to have any relevance at all, we must understand the realities of education in this desperately poor country.  So, visits to schools in remote rural areas are absolutely essential.  All we have been able to manage in recent weeks is a sedate trundle along to the office to a constant accompaniment of screeching, wailing and grumbling as the pick-up reluctantly negotiates each speed bump and pothole.

But last Wednesday, we managed to borrow a brand new vehicle, and before the lender changed his mind, set a course due west and aimed for the Congo.  Well, not quite the Congo, we’re not that brave, but certainly the mountains which separate it from Uganda.  After several dusty hours, there they were hanging on the horizon, purple in the evening sun.  In one of the most beautiful countries in the world, these views must class as among the loveliest.

However, we were not there (just) to look at the views. Having almost entirely missed the precious inspection window, we were determined to catch the last three or four days before schools broke up for the long ‘winter’ holiday, Uganda’s hot season. What with the forthcoming Presidential election and surrounding hullabaloo, we are unlikely to have any chance to be out again in schools now until March, though we will try to get into districts and talk to officials.

So, what were we doing in the Fort Portal area?  A number of fortunate VSO volunteers are located there.   They are a rich resource of information and experience, as well as being able to put us in touch with schools and the primary training centres (PTCs - teacher education institutions) where a lot of them work.  We weren’t all that lucky as far as the school visits were concerned as some schools had already broken up and the rest were winding down with a vengeance.  The only things missing were the chess sets and the Gameboys. However, we were able to speak to college principals and headteachers and look round school premises, even if normal classes weren’t really going on.

Much of our focus was pre-primary (age three to six) and primary.  Nurseries here are all privately funded as the government has enough on its plate attempting to implement universal primary and secondary education.  As a result, it is only the children from relatively well off families who attend.  A pity as across the world nursery education is acknowledged to be vitally important to learning and the development of essential skills.

We often talk about how ‘good’ Ugandan children of all ages are.  Perhaps ‘passive’ would be a better term.  Children have very little idea how to play and virtually none, apart from the wealthy, have any toys.  We occasionally see children using a hoop and stick or pulling an old carton along on the end of a piece of string, but that is all.  More often they are working (hoeing the fields, collecting water, caring for siblings), or just hanging around.  Their work is genuine work and they will be punished if it is not carried our properly.  Discipline here is harsh and children behave.  Toddlers tend to sit quietly and display little of the exploratory activity we associate with that very active age group. Of course, many of them are hungry - not starving, but not eating enough, or suffering from a diet which lacks important food groups.  Or they may have chronic or recurring illnesses which sap their energy.  One of the major challenges of our VSO colleague Sue, who is working with UNICEF to improve the quality of early education, is to encourage more active approaches to learning and to demonstrate how teachers can use local materials for learning through play.

Sue took us to a couple of nurseries which were making positive efforts to provide a good quality of education, using the recently published national framework for early childhood development.  The framework is based on five main areas of learning, each with learning outcomes and suggested activities.  A Caregivers’ Guide provides important messages about ethos and developing an appropriate climate for learning, an example being the use of the term caregivers rather than teachers.  Unfortunately, many establishments do not have access to all the national documentation.  Nevertheless, we saw some examples of teachers making their own displays using both local languages and English, notable efforts in a country where playrooms and classrooms are often completely bare. 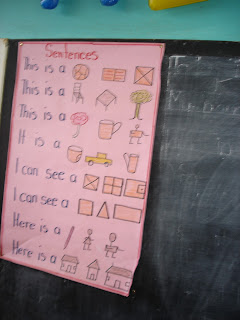 We even saw some displays of children's work, relatively unusual in Ugandan schools and nurseries.


And in one of the nurseries, the colour-coded pro forma used for assessing children’s progress were very similar to the approaches used in Scotland. 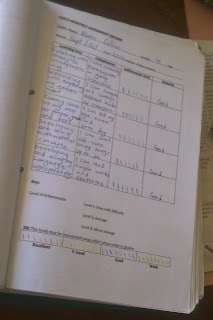 Early education is often very formal in Uganda, deliberately preparing children for the rigours of primary school and the rote learning used to prepare for the primary leaving examination in P7.  Almost all nurseries teach number work, reading and writing from age three, using abstract blackboard work and copying down and working out in exercise books. 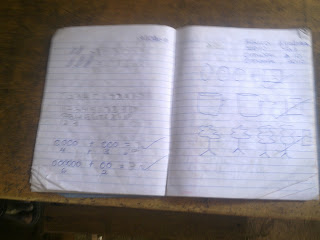 Nursery children usually take yearly promotional exams and can only enter the next stage if they pass.  They sit in rows and focus exclusively on the teacher, with little opportunity for group activity.  Where teachers use more flexible approaches, it is important to recognise and commend these, even though they may be nothing special by British standards.  Fortunately, there is also plenty of singing and dancing, with specially written chants and songs being used to promote important messages about health and learning. For example, we listened with interest to the following song, not all of which was either politically or grammatically correct!  Local language is the policy up to and including P3.


The government primary schools we saw, down in the Kamwenge area two hours south of Fort Portal along a dusty murram road, were in modest enough accommodation.  Some classrooms were wattle and daub, though we felt that there were a few more walls and doors (though not windows) than we had seen before.

The district appears to have made a real push on encouraging parents to send their children with packed lunches.  We saw children going to school with little plastic ‘tupperware’ boxes or, less positively, a stick of sugar cane.  We saw virtually no examples of this in the east, and little enough in the Masindi area.  The classrooms showed evidence of display and, as always, the children were a delight to be with. 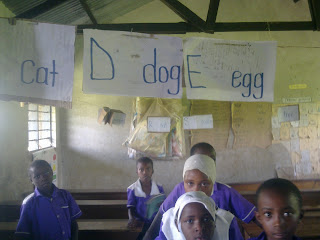 It was somewhat disappointing to see some of the teachers sitting under trees marking the end of year examinations while their charges ran around outside or sat docilely in their teacher-less classroom with nothing to do.  If children have made the effort to walk some distance to school, often in bare feet and with no breakfast inside them, then it seems a pity that they are not taught when they get there.

Yet, overall we felt reasonably positive about what we had seen.  Our VSO colleagues have challenging jobs and are carrying out vital tasks in improving health and education.  There was evidence in schools that their work was having a positive impact.  The headteachers we spoke to, though battling against significant odds, not least the management of their own staff, were doing their best to make improvements, modest though these might be by British standards.  Those teachers who were carrying on teaching their classes despite the pull of the red pen, had good relationships with their pupils and were doing the best they could.  They were using the local language to teach the new thematic curriculum, although almost always through lock-step whole-class teaching, and with little or no provision for those with additional support needs.

Although too late to see the special unit in the local demonstration school in action, we did see evidence of some of the efforts our VSO colleagues are making to broaden the range of approaches for teaching and care used in ‘special needs education’.  In Uganda, ‘special needs’ almost always relates to those with a sensory or physical disability, so you see evidence of Braille and sign language, and inspectors check on the provision of ramps.  However, there is little understanding of the broader concept of learning needs.  Although the term ‘inclusion’ is used, it really just refers to the inclusion of children with special needs in the mainstream classroom.  This is now government policy but is very challenging to implement given classes of a hundred, little training for mainstream teachers and no learning assistants.  The needs of those with language and communication difficulties and other similar barriers to learning are rarely recognised.  We have been told that there are ‘no’ children with autism spectrum disorders in Uganda, but whether that is actually the case we don’t know.  We suspect such children may never actually reach school. What families would choose to spend precious financial resources on their education when they can barely afford to educate their ‘normal’ children?  And their behavioural characteristics, and those of children and adults with mental illnesses, may well be interpreted within village life as symptoms of bewitchment.

So, despite all our transport problems, it was well worth coming here.  We learned a lot and also learned how much we have still to learn.  Roll on March, as we gradually fill in the map of Ugandan education.

Posted by Elisabeth Ritchie at 11:41 AM