Perhaps not so much ‘discover’ as ‘escape to’.  Although we love the Ugandan sun, which bathes us in warmth but never batters us with heat, sometimes Kampala itself just gets a bit much.  What with the traffic and the dust, not to say the rifles and uniforms, it is good to get away.  So far what we've been doing at the weekends is go down to Entebbe, where Stuart plays golf and I swim at the very civilised Lake Victoria Hotel.  However, we’re changing tack.  Stuart, ever mindful of getting his money’s worth, has discovered that if you join the golf club at Jinja, to the north east of Kampala on Lake Victoria, not only can you play at Entebbe and Fort Portal (the latter admittedly rather a long way to go even for the golf-obsessed), you can actually play at the normally extortionately expensive Kampala course for a more reasonable sum.  Never one to turn down a bargain, Stuart is therefore planning to join the Jinja Club, which is significantly cheaper than all the rest, has a good-sized swimming pool and even some pleasant tennis courts as well if you feel so inclined (I speak theoretically, of course).

Jinja golf course stretches pleasantly along the banks of the Nile, where it pours out of Lake Victoria on its way to Lake Albert, Sudan and Egypt.  Being on a river bank, the course is almost all flat, good for the ageing golfer.  Although it only has 9 holes, these limitations do mean that I don’t have to come prepared to carry out heart defibrillation, but can relax genteelly by the club’s little swimming pool and read an improving book.  The course has its little quirks, however, including the inordinate number of termite mounds from which players can get a 'free drop'.

The same rule applies if you land in a hippo's footprint, though hippos are rarely if ever seen these days.


There is not the same preciousness about most Ugandan golf courses as in the UK, so nobody really minds about sharing them with the odd dog.  And why shouldn't the locals take a short cut when collecting water?

However, first things first.  What do you need to know about Jinja?  Well, we like Jinja town itself.  It is shabby and faded but has a real sense of its colonial past.  Jinja was very largely built by Indians, with long broad tree-lined streets on a grid pattern.

The shaded walkways are lined with fabric shops, the seamstresses plying their antique Singer machines along the side of the pavements.  Here you can come to choose the bright cotton or silk fabric for your new gamese and get it designed and made on site. These small-scale businesses look healthy enough and, indeed, the recent development of Jinja as an international adventure centre for white-water rafting has provided the incentive for some of the old colonial houses to be bought up and renovated as guest houses.  And very nice some of them are too, with some excellent food – good places to ‘chill out’.

The Asians, together with the small European population, used to live in large lakeside houses with verandas, not far from the golf club.  Once they were expelled by Amin, their lovely houses began to fall down and many of them are now shared among many families.  Washing hangs across the once neat lawns, goats nibble at the vegetation and ragged children run around.

With the disappearance of the Asians, the industry also collapsed.  And what Amin started, the current administration continued, transferring what industry was left to the centre and west of Uganda and leaving Jinja and the surrounding region of Busoga, now notorious for its epidemic of jiggers, to decline into poverty.  The average inhabitant of Jinja earns just $100 per year, well below the official international poverty level of a dollar a day. Jinja, once the industrial heart of Uganda, went through an inevitable process of decay and dissolution, though a few Asians have since returned to run the sugar works and other industries.  The once proud Busoga railway line, developed following Winston’s Churchill’s visit in 1907, now carries only a few freight trains which rumble along the Nile on their way to Kampala.

By the way, Churchill’s book My African Journey, is a wonderful description of his travels through Uganda, his respect for the political structure and order of the kingdom of Buganda, with its straight broad roads easily the equal of those of the Romans, and his appreciation of the fertility and beauty of the country as a whole.  It was Churchill who coined the phrase ‘The Pearl of Africa’. 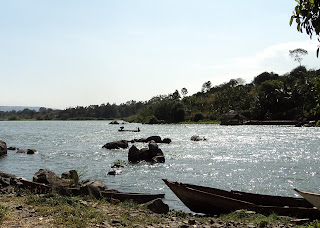 But Jinja was an important place long before the British or the Asians appeared.  Where the Nile flows out of Lake Victoria it forms the boundary between the kingdoms of Buganda and Busoga.  And there also there used to be the ‘stones’ of the Waganda, later renamed the Ripon Falls by John Hanning Speke.  Speke came across them in 1862 and claimed them as the ‘source’ of the Nile.  In fact, there are many tributaries of the Nile, and the claim was much disputed over the years.  Still, most people agree on the Jinja location.

Speke describes ‘the roar of the waters, the thousands of passenger fish leaping at the falls with all their might, the Wasoga and Waganda fishermen, coming out in boats…hippopotami and crocodiles lying sleepily on the water, the ferry at work above the falls, and cattle driven down to drink at the margin of the lake.’  It would be nice if his description finished there.  Alas, being a Victorian gentleman, it continues, ‘I felt as though I wanted only a wife and family, garden and yacht, rifle and rod, to make me happy here for life, so charming was the place.’  He does make it sound rather like the Lake District.

Incidentally, some of Gandhi’s ashes were scattered over the waters of the Nile at Jinja, the place marked by a monument to him.

Well, the Ripon Falls are gone, overwhelmed by the river following the building of the Owen Falls dam further downstream, which provided the power for Jinja’s industries.   So also are the hippos and most of the crocs.  However, the charm of the place remains, despite the best efforts of the boat touts and cafés on the Jinja side of the river to make it loud and tacky.  The Owen Falls, of course, were also affected so the Nile at Jinja is a very different place from when the Waganda and Wusoga venerated the Falls and made their periodic sacrifices to the spirits which dwelt there.  If you go further downstream, you reach the Bujagali Falls where young people from all over come to enjoy the impressive and terrifying white water rafting.  But get there quickly.  A new hydro-electric plant is going to swamp the Bujagali Falls as well some time this year, though informed friends tell us that the rafting will continue further downstream.

Nevertheless, despite all these changes, Lake Victoria remains lovely.  We have stayed twice at the Kingfisher Safari Resort which is situated right on the lake, its thatched bandas looking out onto trees, just a short walk from the jetty where the boats come in. 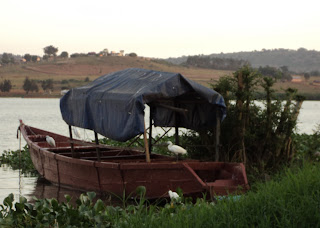 The fishermen come in with their haul of tilapia, and small children collect water, ignoring the bilharzia and other contaminants.

You can take a very pleasant boat trip down the river away from the lake to see the source and watch the birds.  However, I think the view of the source from the gardens opposite the Jinja bank is lovely.  The first time I was there, 30 or 40 vervet monkeys were out playing before the day got too hot.  The Source of the Nile Gardens are pleasantly run down and peaceful so I do hope some over-enthusiastic tourist official doesn’t decide to redevelop them. 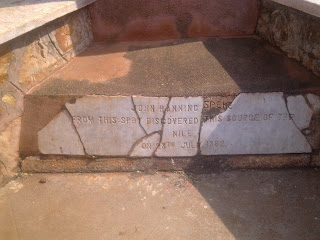 Well, I think Stuart and I can see some pleasant weekends ahead of us.  Some gentle golf, some lengths in the swimming pool, one or two beers looking over the lake and fresh Lake Victoria tilapia, what more could one want?


PS (08/01/2012) Stuart's membership of the Jinja Golf Club never did work our, sadly. He applied a year ago and despite repeated promises that his membership was up for discussion at the next meeting, it has still not happened. We have a feeling that mzungos are not all that welcome though the staff at the clubhouse itself are very friendly. We still go to Jinja every so often for golf and swimming, but not as often as we were planning to. Pity...

PPS Membership came at last in April 2012! We left in December that year, and the membership only ran out a year or so ago.

Posted by Elisabeth Ritchie at 11:10 AM