Are we speaking the same language.....?

He says
Even if he tried
To answer my questions
I would not understand
What he was saying
Because the language he speaks
Is different from mine
So that even if he
Spoke to me in Acoli
I would still need an interpreter.

Song of Lawino by Okot p’Bitek has been a wonderful discovery.  I know that the poem has been on Ugandan school syllabuses for some time, and that every educated Ugandan knows about it.  However, it is new to me and, thanks to the Book Club I recently joined, represents another step in my exploration of Ugandan society, culture and literature.

A bit of background first:  Song of Lawino is a dramatic monologue by an Acholi woman living a traditional life in the north of Uganda.  In the poem, published in the early 1970s, she bewails the fact that her husband, Ocol, has taken a second wife who is westernised and, in his eyes and probably in the eyes of society, more suited to him now he is university educated.  She recalls in turn each aspect of Acholi life which she sees as being devalued and scorned by Ocol.  In so doing, she paints a vivid picture of a society which even then was under threat.

Okot wrote two versions of the poem, the first in Acholi and the second in English, rather like Sorley Maclean in Gaelic and English.  That fact in itself tells us something about the dilemma faced by African writers, similar to that faced by Gaelic writers and in many respects more challenging.  As one member of the book club said of his own writing, his first language is only spoken by a couple of thousand people.  Indeed, many of the 56 or more languages in Uganda do not even have a written form.  If they wish to be read, Ugandan writers almost always have to write in English, usually their second language.

Of course, writing in your second language does not mean that you cannot be a great writer.   Think of Chinua Achebe writing in English and Camara Laye in French.  Think of the great writers of the Indian sub-continent and its diaspora.  Indeed, for some years it has almost been a truism that much of the best writing in English has originated in the Commonwealth.  Where would English literature be without Nigerians and Kenyans?  Sadly, no Ugandan writer has had the same international currency.   Who can tell what coincidence of circumstances, geography, culture and inheritance brings about outstanding creativity or the ability to break through to publication?

Ugandans are educated in English almost from the time they enter primary school, and sometimes long before that, in nursery school.  Many upper middle class Ugandans speak English at home as their first language.  The government policy of using local language in the first three years of primary school is quite often ignored, particularly in towns, as parents want the social benefits of English for their children and, anyway, there may not be many, or any, reading books in the local language.  The policy, of course, has a well-accepted educational basis – using and developing your first language, or mother tongue, helps you develop intellectually.  The conceptual development of children who only learn through their second language, usually English, may be held back as they struggle to make sense of the teaching being delivered.

An added complication in Uganda is that the government has recently announced that Ki-Swahili will now also be an official language.  Very few people in Uganda speak it and there are scarcely any teachers.  However, the country has entered the East African Common Market and must be able to communicate with its Kenyan and Tanzanian neighbours.  Francophone Rwanda has taken a similar step in making English its official language in place of French and faces similar problems. 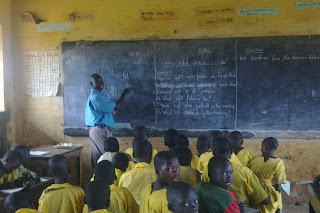 However, Ugandan English differs from UK English in some subtle and some not so subtle respects.  Firstly, some words are pronounced differently, for example, a ‘ch’ sound is often used where we would use a hard ‘k’, for example in ‘security’, ‘documents’ and ‘curriculum’ - rather similar to Italian.  Beyond pronunciation, the same words may mean rather different things, for example, the word ‘scheming’ is quite pejorative in UK English but in Ugandan English it is simply the term used for teachers’ schemes of work. ‘The teachers have done their scheming’ is NOT a reference to subversive union activity.  Quite often Ugandan English drops the adverbial preposition (Jane, is that what it’s called?) from verbs, so that ‘pick’, for instance, is used where we would use ‘pick up’.  ‘I will pick you at 7’ does not imply some kind of selection activity.  Indeed, the word ‘pick’ is used in many different contexts where UK English speakers would select another word.  For example, in today’s paper, an interviewer asked a well-known gynaecologist ‘How did you pick interest in women’s health?’.  UK English speakers would not simply have chosen a different word; they would have expressed the thought completely differently.   ‘How did you start becoming interested in women’s health issues?’ would be nearer to what we would say.    We know what the interviewer means, so there is no problem with understanding, but the expression is just different.  Ugandan friends tell us that this choice of language reflects the use of the equivalent word to ‘pick’ in their local language. 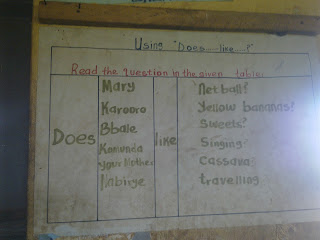 None of these divergent usages interferes with understanding but they do make Ugandan English into a rather different language from its UK parent.  One can predict that in the not too distant future, African – or even Ugandan – English will bear the same relation to UK English as does American English.  Indeed, is it too fanciful to consider that perhaps we are seeing the first geological cracks in the continental plates similar to those which eventually separated Spanish, Italian and Romanian from their Latin origin, and have made three different languages of Norwegian, Danish and Swedish?  Certainly, I understand that in West Africa what used to be called ‘pidgin’ is now considered by linguists to be a language in its own right.  All this brings into question the hoary old issue of what is a language and what is a dialect, an issue which used to dominate discussions of the status of Doric in the north-east of Scotland, for example.  The equally hoary saying that ‘a language is a dialect with a gunboat’ has little relevance in Africa where national borders are rarely contiguous with linguistic boundaries.

But how does all this speculation about language relate to the mutual incomprehension of the unfortunate Lawino and her Ocol?  Language is not just about words, but about concepts.  As I noted earlier, children develop their thinking as they develop their vocabulary.  Ocol is talking about a whole world about which Lawino knows little.  Even if he had the words, he feels that she will not understand the concepts they relate to. 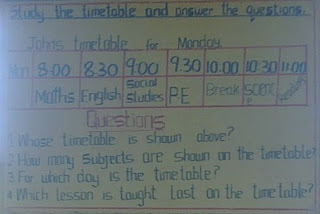 Most Ugandan children learn English from teachers for whom it is also a second language which they learnt from their own teachers.  The breadth of vocabulary and expression which characterises UK English may not be something they are automatically exposed to, just as native English speakers often end up speaking an impoverished version of French.  Having a limited vocabulary can make it difficult for people to develop, not just express, their thoughts.  The implication of this linguistic narrowness for the education of Ugandan children is quite serious as they are not simply 'learning English', they are 'learning through English'.  Limitations in their grasp of English have a potentially negative impact on their learning of every subject on the curriculum.  In school it also opens up great chasms between upper middle class English speakers and those who are only introduced to English part way through primary school.  Yet they all sit the same examinations, in English, at the important transition points in their education.

The use of English as the main language of education, business and the professions potentially devalues the mother tongue.  It also devalues hugely important aspects of culture and the arts, for example, oral tradition and poetry which rarely have a place in the formal curriculum of Ugandan schools.  The use of English even affects one's personal identity.  One of the sadnesses of Uganda is the fact that almost everyone uses an English ‘Christian’ name.  Why is that?

My husband rejects me
Because, he says
I have no Christian name.
He says
Lawino is not enough.
He says
Acoli names are Jok names
And they do not sound good.
They are primitive, he insists,
And he is a progressive man.

Jok refers to traditional religion.   Ocol even goes as far as renaming his children, replacing their 'pagan' names as he calls them, with names which Lawino, their mother, cannot even pronounce.

Okot wrote a sequel to Song of Lawino, called Song of Ocol, in which Ocol rejects what Lawino stands for and presents what he thinks of as the way forward for the Acholi people.  Sweeping away ‘tribalism’ can involve sweeping away languages and sweeping away identity.

We will obliterate
Tribal boundaries
And throttle native tongues
To dumb death.

The poem concludes with the words.

What proud poem
Can we write
For the vanquished?

Posted by Elisabeth Ritchie at 8:05 AM