Growing up in Uganda

It may sound strange (and slightly sad!), but for us one of the most interesting events this week has been UNICEF’s publication of The State of the World’s Children report 2011, Adolescence: an age of opportunity?.  This year the report focuses on young people aged between 15 and 19, and we've been thinking about the implications for young people in Uganda.

And it is a fascinating report.  The focus of much recent work in development and education has been on younger age groups.  Globally, there have been major successes: more children are surviving infancy, more children are going to school and more children are developing essential skills in literacy and numeracy.  The picture may not be universally rosy, of course, and enormous challenges remain, not least in Uganda, but there is progress, as reports on the Millennium Development Goals attest.  However, what about the older brothers and sisters of these children?

One of the most interesting aspects of the UNICEF report is that it finds that young people everywhere face similar challenges.   It is today’s adolescents who will take the world into its next phase, deal with the impact of climate change, poverty, conflict and increasing migration and use their skills to develop a fairer and more equitable society.  To deal with these challenges, the report argues, young people need education and training which give them the skills they need to break the cycle of poverty.  They also need opportunities to participate actively in society.  Finally, their rights under the UN Convention need to be recognised and addressed.

The UNICEF report contains pages of comparative data relating to every country in the world.  What Stuart and I have been looking at is Uganda in the context of its closest neighbours in East Africa: Kenya, Tanzania, Rwanda and Sudan (though recognising the huge diversity within Sudan).  We omitted DR Congo because of its distinctive context but included Malawi, also within the UNICEF grouping of Eastern and Southern Africa, because of its strong links with Scotland.  All of these countries, apart from Kenya which is a ‘developing country’, fall within the category of ‘least developed’. 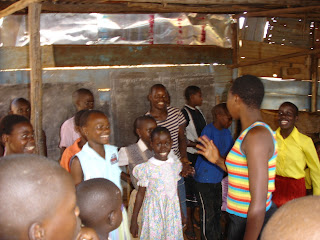 So, what is it like to be an adolescent in Uganda?  Ugandan teenagers live in a country which is poor, but not as poor as some of its neighbours.  The gross national income (GNI) per head in Uganda is similar to that in Rwanda and Tanzania.  Malawi is notably poorer and Kenya wealthier.  Sudan has the highest GNI of all.  Just over half of Uganda’s population falls below the international poverty line ($1.25 per day) compared with three quarters in Rwanda and Malawi and nearly ninety percent in Tanzania.  Only 20% of Kenyans fall beneath this line.  In the 1990s, Uganda paid far more than these countries servicing its (much larger) debts and has therefore gained most from debt relief.

Young people in Uganda live in a country which is heavily militarised and where other public services take far lower priority than defence.  Uganda spends only 2% of its national budget on health compared with the 5-7% spent by other East African countries.  It spends 15% on education, far lower than the 26% spent by Kenya and Rwanda.  However, it spends a whacking 26% of its budget on defence, a third again more than the proportion spent by Tanzania, more than four times that of Kenya and Malawi and almost as much as Sudan (28%).  Young people in Uganda grow up surrounded by soldiers and military hardware, their parents are more likely to be in the armed forces and the armed services may present a very real career option for adolescents themselves. Ugandans act as ‘peacekeepers’ in a number of African countries.

Most 15 to 19 year olds in Uganda have not attended school for some years.  Despite relatively positive enrolment rates (96%), they drop out of primary school in huge numbers, only 32% remaining to P7, fewer than in almost all neighbouring countries.   (The proportion reported by schools themselves is actually 72%, but many of these may be ‘ghost’ pupils.)  Only 22% of Ugandan adolescents enrol at secondary school and only 16% actually attend, more than in most neighbouring countries but far fewer than in Kenya.  The implication for the country’s economic development of all these un- or under-employed, half-educated and unskilled young people is enormous.  The waste of human potential and the implications for the next generation cannot be underestimated, particularly given Uganda’s very high fertility rate (6.3%) and population growth rate (3.6%). 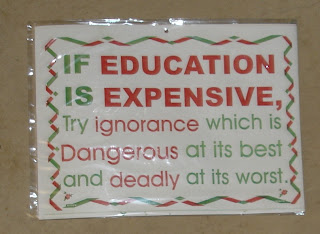 Young people in Uganda experience a lot of ill health and death within their family circle. They themselves have a higher HIV/AIDS rate (3.5%for those aged 15-24) than peers in all neighbouring countries except Malawi, and know less about the virus.  Many will see siblings and parents die.  Uganda has a higher infant mortality rate than its neighbours, 128 children dying out of every 1000 born, making it 19th out of all countries in the world.  In the UK, the rate is 6 out of every 1000. Uganda is making less progress in reducing its infant mortality rate than any of its neighbours except Sudan, and the rate of improvement is decreasing.  The lifetime risk of a woman dying in childbirth is one in 35 (one in 4600 in the UK), with Uganda having the lowest rate among its neighbours of skilled birth attendants.  The impact of maternal death on families is enormous.  If a mother dies, children may end up on the street, be taken in by relatives or acquire a stepmother.  Their school fees may no longer be paid and many will drop out of school.  They will be often be expected to ‘earn their keep’ by working at home or elsewhere.  Given their responsibilities for younger siblings, adolescents may suffer disproportionately. 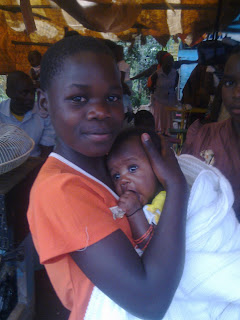 Many young people in Uganda have very short childhoods.   Uganda has a higher rate of child labour than its neighbours (36%), and at 46% a higher rate of child marriage than any apart from Malawi.  Compared with its neighbours, Uganda has the highest rate of young women giving birth before the age of 18 (35%) and the highest overall birth-rate among adolescent mothers (159 children born for every 1000 girls).  Physical immaturity is closely associated with maternal death.  It can also lead to long term damage such as fistulas which cause incontinence and may lead to social exclusion.   Young women in Uganda also expect less from their relationships with men.  65% of girls aged 15 to 19 have been abused sexually and/or physically, one of the highest rates worldwide.  Particularly worrying is the fact that 70% believe that men have a right to beat them if they are perceived as neglecting their household duties, a far higher rate than in neighbouring countries.

In summary, we have a country which is not significantly less prosperous than its neighbours but which has far more serious health issues, perhaps not unrelated to political decisions about the allocation of the national budget.  So what can be done about it, given that the recent election indicates that there will be no significant changes in policy at national level?

The UNICEF report points to some positive action.  In Uganda, programmes like the NIKE Foundation – Girl Effect focus on empowering girls and enabling them to develop the skills and confidence to become ‘entrepreneurs’, using their earnings to support their families and continue their education.    In Kampala, the Youth Employment Network, working with the Ministry of Education and Sports and Germany’s development agency DTZ, has developed a curriculum which complements formal schooling and focuses on literacy, numeracy and vocational skills.

A number of organisations are working hard to address Uganda’s major issues in young people’s health, care and welfare, many of them with the help of VSO volunteers.  NGOs such as the African Network for the Prevention and Protection against Child Abuse and Neglect (ANPPCAN) are endeavouring to raise awareness of the extent of sexual and physical abuse of children and young people through research, publicity campaigns and partnerships with other organisations.  It aims to change attitudes among education professionals, communities and families. VSO volunteers also work in maternal and neo-natal healthcare to raise standards and expectations and train staff.   Even people like Stuart and I are involved.  Through developing approaches to school inspection and by training inspectors, we can help our colleagues in their work to monitor gender, child protection and health issues in schools.  Our colleagues in Link engage in community development work, raising awareness of health issues including HIV/AIDS, developing positive approaches to managing children’s behaviour and providing advice on nutrition and sanitation. 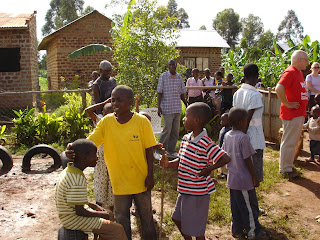 Another approach to addressing these issues is through developing employment and working with the private sector.  VSO provides volunteers to work with businesses to mentor and coach Ugandan managers and develop their skills, and to help to increase profitability.  The majority of the Ugandan working population need to earn more money.  The country apparently has a significantly lower work rate than other East African counties.  Indeed, a recent study reported that one Kenyan does the work of four Ugandans!  However, this low work rate is not universal.  Uganda is full of small-scale individual entrepreneurs, growing and selling produce, cooking and selling food and making household goods and furniture.  Lacking a safety net, they often work very hard, far harder it may seem than those employed by the public sector.  Uganda appears to lack a public service ethic such as in the UK.  Developing entrepreneurial skills, motivating workers and providing incentives are very important areas of work.

All this brings me to one of the other interesting events this week.  You may have picked up the fact that we are having elections in Uganda!  Well, one of the successful candidates in the local council elections is Dr Ian Clarke from Northern Ireland, who has lived in Uganda since the mid-1980s.  Originally a medical missionary, he founded Kiwoko hospital in the Luwero triangle, an area devastated by the 5-year ‘bush’ war in which 500,000 people died.   You can read about his work as a doctor in his book The Man with the Key has Gone.  Having worked through the worst years of the AIDS epidemic, he left his missionary work and founded the International Hospital Kampala (IHK), and various other related businesses.   What is interesting about Ian Clarke is how his views have changed and developed over the years.    In his recent book How Deep is this Pothole?  he talks about his belief that what Uganda needs in order to deal with its poor public services, chronic and sometimes deadly inefficiency, poor skills development and corruption is a stronger private sector, hence his many successful business ventures.  It is not a line of argument which we would normally warm to, but it is interesting and, in many respects, convincing.  Anyway, Ian Clarke, standing as an independent, has campaigned on the basis of better service delivery.  He has promised better roads, better healthcare and proper sanitation and he has won the election. Good luck to him!

And good luck to all young people in Uganda.  They live in one of the most challenging countries in the world and have many difficulties ahead of them.  However, we are convinced that they have the capabilities and potential to develop the skills they need and transform Uganda into the wonderful, caring and prosperous country that it really should be.

Posted by Elisabeth Ritchie at 9:45 AM