Advanced Level results are out at last.  Congratulations to all the S6 candidates who have made it through the elimination contest which constitutes Ugandan education.  The government will support the best 4,000 A level students at one of the five public universities.  Among them will be its future leaders.  They are its elite. 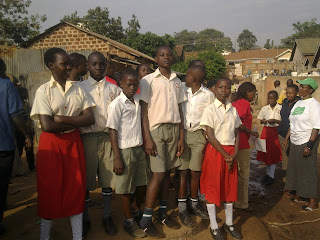 Just think of the obstacles they have overcome.

Of course, as in the UK, some students had it much easier than others.  Unsurprisingly, the ‘best’ results came from the ‘top’ schools, mostly in Kampala or nearby districts, those which are also the most selective. The privileged young people from schools like these shimmy their way through the ‘youth’ pages of the newspaper supplements, modelling expensive clothes, attending exclusive parties and brandishing the latest IT equipment.  So, the same inequalities exist as everywhere else in the world, but, perhaps, more so here.   Unfortunately, Ugandan newspapers seem to make no connection between selection and examination success, publishing only raw scores with no analysis.

In some parts of the country, particularly in the north and east, virtually no pupils – and in four districts no pupils at all - were able to sit A level as their districts had scarcely any schools or, indeed, no schools providing teaching at this level.

Overall, fortunately, performance has risen, though girls’ performance is still lagging behind, and hence their access to university.  As elsewhere, girls did more poorly than boys in science, but ‘exhibited better communication skills and maturity of thought’ in the Daily Monitor’s summary of the UNEB report.

Many of the successful results hide difficult personal stories.  Many young people had trouble paying school fees, often being sent home for non-payment.  Others were luckier, having been supported by understanding school principals, well-wishers, charities or NGOs.

One strong-minded young woman, who was also successful in winning a hotly contested youth seat on Entebbe Municipal Council, achieved very high grades despite being, as she said, ‘suspended for two weeks towards exams for reporting our Deputy headteacher after finding him strangling students.’

Despite achieving excellent ‘O’ level results, one young man ‘had only one option’, to go to teacher training college (the only free tertiary education in Uganda), when his parents could not afford the fees for a school which taught to A level.  He took up a teaching post at a primary school but ‘would sneak to A-Level schools to get notes for S5 and read on my own.’

More than half the inmates at Luzira Maximum Security Prison who sat A level qualified for university entrance: 16 out of 30, a remarkable achievement which points to tragic waste of talent and potential.  The rest also achieved, though at lower levels.  Commendably, the Ugandan prison service enables successful students to take tertiary studies in Entrepreneurship and Small Business Management, supported by Makerere University Business School.  Interestingly, those on death row performed better than the rest. They expressed their gratitude to the authorities for enabling them to study, and asked for ’a second chance in life to contribute to the development of the country’.  Amen to that, we say…

Interestingly, a week before the A level results came out, the newspapers also reported the results of the technical and vocational examinations.  Here performance has fallen, with almost half of all candidates failing, a situation which the Ugandan Examination Board blamed on ‘inadequate facilities for practical lessons, shortage of teachers and inadequate syllabus coverage.’  In other words, low status and perceived worth.  The BTVET (business, technical and vocational) sector is probably the most important to Uganda’s future.  With one of the highest birth-rates in the world and a greater proportion of unemployed young people than virtually anywhere else, Uganda needs skilled craftsmen and women, healthcare staff and technicians, in particular those who have entrepreneurial skills and can make jobs for themselves.  The public services are failing Uganda, leaching away its resources and feeding the nation’s endemic corruption.  It is probably going to be the private sector which saves the country.  But the private sector needs people with technical skills, creativity and passion for enterprise, not those eliminated and failed by an out-of-date and elitist education system.

Ugandan students are surely among the most determined, persevering and committed in the world.  Given the obstacles placed in their paths, despite the introduction of universal secondary education, one would almost think that the country did not want the kind of educated, literate, thinking citizens that make democracy a reality.  The personal, practical and intellectual qualities these successful technical/vocational and A level students have demonstrated will make them invaluable contributors to the process of building their country and addressing the inequities which have held back or excluded their peers.

These young people are indeed la crème de la crème.  The future is in their hands.


You may also be interested in What do we mean by 'motivation'?, about the material rewards some privileged Ugandan schools use to 'motivate' their pupils.

Posted by Elisabeth Ritchie at 6:46 PM