Uganda certainly has some golf courses in most peculiar places. We have already written about the idiosyncratic, stunning but taxing Mehta course in the heart of the Lugasi sugar plantations (Golf Courses of Uganda Part 1).  We have not yet ventured out to the golf course which we have heard resides in the middle of the Kenyara sugar works near Masindi.  We have, however, penetrated to the depths of the countryside to the north of Kampala where, after a bit of searching, we found the splendidly-named MaryLouise Simkin’s Memorial Golf Course (MLSMGC). The only relationship that MLSMGC bears to the Augusta National currently filling your screens is that in terms of manicuring, it is at the opposite end of the spectrum.

We have not heard of many golf courses in the middle of agricultural research centres.  MLSMGC is buried deep in the grounds of the National Agricultural Research Organisation’s Crops Resources Institute at Namulonge.  Namulonge itself is buried deep in the countryside beyond Gayaza, right in the middle of undulating acres of banana plantations.  And Gayaza is on the quiet, lazy and circuitous route between Kampala and Jinja, beyond the furthermost limits of the Northern Bypass and only a few miles from the city itself.  Indeed, its location is one of its major merits.  If you cannot face being bankrupted yet again by the extortionate fees at Kampala Golf Course and, like us, live at the opposite side of the city from Entebbe, probably the best golf course in Uganda, and cannot face battering through the city yet again, then the Namulonge course is for you.   It is clearly marked on Uganda Map No. 3: Beyond Kampala.  Cross the bypass and on reaching Gayaza, turn left.  Drive five or six miles along a brand new tarmac road.  Ignore the first agricultural research centre you come to: the askari hadn't heard of golf.  Continue a couple more miles and there you are. 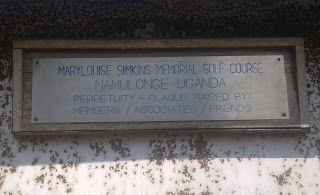 As soon as you hesitate at the right hand turn, not really believing that you have actually reached a golf course, you are accosted by an enthusiastic caddy who hops into your vehicle and directs you through the grounds to the course itself.  At first you can’t really believe your eyes.  You would almost think that you were venturing into a miniature version of an English country estate.  That is, until you see the ‘club house’ and you are brought rapidly down to earth.  ’Club house’ is a bit of a misnomer: really a booth for selling beer and sodas and making sure you pay.  Still, it does the business and the welcome is warm enough (and the prices low).  The friendly local youngsters hang around, treating the crumbling fencing as an adventure playground.  Their parents cross the paths, loaded with firewood or jerry cans of water.  Across the greens you can see the long low buildings of the research centre itself.  But you are here to play golf, so off you go.

The course comprises nine holes in pleasant parkland surroundings – like Ratho Park Golf Course – but, when we were there at the height of the drought, burnt bone dry.   The greens were terrible.  Unlike most of Uganda’s other courses, there is no watering. The tees were in a similar condition. However, the rains have now reached Kampala and its surrounding area, so don’t be too put off by our pictures.  Indeed, even as I type these words I can see pink sheets of lightening across the dark sky towards Namulonge, the thunder is growling and heavy rain is on its way once again.  The course is probably as pleasantly green now as the fields all around it.  Apart from the par 3s, most holes are well designed, including three attractive dog legs, and a couple of long par 5s. There are no bunkers.

Actually, there are only eight greens – the second also serves as the eighth but is attacked from a different angle. The course is unlikely ever to be “busy” but imagine if it was, with several groups playing 18 holes – potentially 4 groups simultaneously playing the 2nd and 11th and the 8th and 17th  all heading for the same green. Contemplation of that scenario drives Stuart to drink.

The course has one ridiculous hole – a 250 yard par 4.  To protect the par, the tee is placed directly behind a huge tree. You MUST aim away from the tree (and therefore the green), otherwise you will be felled by the rebound. Makes Augusta seem straightforward.

But Stuart played with a Namulonge member who plays off 4 in a Jinja competition – and yes – he was a real golfer. I guess playing anywhere else other than Namulonge must give you the feeling that you’re playing Augusta.

Posted by Elisabeth Ritchie at 12:47 PM