Through a young person's eyes

‘We get an education,’ the head girl said.

The head boy added, ‘We are able to go to school and learn.  Even pupils like us who are poor can succeed.’

Incidents like this are humbling.  I wonder how often words like these pass the lips of teenagers at British secondary schools.

To be honest, it was not a very good school.  In fact, at first sight, it seemed to be a pretty awful school.  It had no science labs and what chemicals there were, were kept in a dusty cupboard behind the headmaster’s office.  The boarding hostel had not been registered with the district.  The dozen female boarders washed at the back of a shed in the open air, using jerry cans of water from the standpipe.  The outdoor kitchen produced reasonable platesful of lunchtime posho and beans, but only a handful of pupils could afford to buy.  Prices had gone up from 200sh per serving to 500sh (14p), as a result of Uganda’s soaring inflation, and were beyond the means of almost all of them.  Young people were milling about on the grass as there weren't enough classrooms; the pupils sitting exams were using those rooms that did exist (a combination of partly finished brick and dilapidated wood); and only five out of the 13 teachers had actually turned up.  Some subjects were allocated too much time and some too little as the timetable appeared to be built around teachers’ convenience rather than pupils’ needs, or, indeed, the curriculum.  This private school charged 40,000sh per term (about £12), with an additional 10,000 for the building fund.  Nevertheless, to be fair, the ‘O’ level results were quite good, given the context.

We had already visited a government-funded secondary school that day where pupils had been even more positive.  They had told us that they felt they were learning a lot, that teachers were friendly and that they gave them a lot of attention and help.  When we checked the attendance book, however, it turned out that only 15 out of 30 teachers were present, 50% attendance as in most Ugandan schools.  Both the headteacher and the deputy were absent, also par for the course.  Questions about smooth transition from primary school were met with bemusement.  Ugandan children are so grateful to be given a place in a secondary school that it never occurs to them to worry about making the change.  Fifty eight pupils stayed in the unregistered boarding hostel.  Being a school that provided education under the Universal Secondary Education scheme (a misnomer if ever there was one as ‘universal’ in this context means accessible to about a quarter of all children) education was ‘free’.  However, each pupil was expected to bring 50,000sh (£15) per term as ‘development fees’.  Those who failed to pay provided labour for the new school building, including making the bricks.  For 25,000sh per term (£7) you could have a school lunch, but only 150 out of the 1020 could afford it.  The rest got through the school hours from eight in the morning to five in the evening without any food at all, a day usually extended by a journey of an hour or two at each end, on foot of course.


All this probably sounds dreadfully depressing to Scottish ears, but these pupils were anything but depressed.  They were keen to be at school, wanted to learn and were grateful for any help they got.  As they milled about the playing fields they looked no different from any other teenagers, though considerably less sullen than British ones and with none of their loud galumphing or sneaking behind the bike sheds for a quick smoke.  Indeed, many British teachers would give their eye teeth to teach young people like these.  These students expect so little and are so grateful for the modest benefits they receive.  They really really want to learn.  And learn they do, although principally through memorising and recalling information.  What Ugandan students lack most are opportunities to think for themselves, to challenge each other and their teachers, to be inventive, to outrage, scandalise and shock.  They have no chance to practise being stroppy and mouthy, and any stepping out of line is severely punished.

Ugandan children expect to work hard and do so from a very early age.  Once back from school, they may go out to hoe the fields, tend the cattle and goats and collect water.  Then they do their homework, often on the floor and usually by paraffin lamp.  They genuinely care for each other, with five year olds looking after one year olds and fourteen year olds trailing a string of younger siblings as well as one on their back.  You rarely hear them squabbling or complaining.  They exhibit exemplary patience at home just as they do at school. 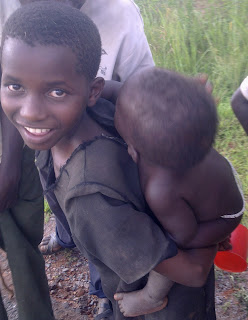 Like all young people, Ugandan children learn from the adult models around them.  In Uganda politeness and ‘smileyness’ are much valued qualities.  ‘You are very welcome’ we are always being told, when people would probably really prefer to see the back of us.  Ugandan children are considerably more courteous than British children.  Like the young people quoted earlier, they are usually quite articulate and willing to engage even with the two strange mzungus who wander into their classrooms.  They are also surprisingly tolerant of any inadequacies in their schooling.  Of course, their standards and expectations are also quite low.

However, let’s take a young person's perspective for the time being.  Things are getting harder for families, right across the country.  Prices of foodstuffs have doubled; fuel has gone up by half as much again in the last couple of months.  Inflation was just over 6% in February and is now over 11%.  The parents of many of these young people are really struggling.  More children are eating just one meal a day.  They are watching their parents become ever more anxious and distressed.  Ugandans generally are patient, far more so than we are.  They are used to waiting. They wait in hospitals, public offices and, if they are like Stuart, for their golf club membership.

However, Ugandan patience is running out.  One sign of exasperation is that we are now into the second week of a series of ‘walk to work’ protests about rising food and fuel prices.  Some of the responses from national leaders could be interpreted as somewhat insensitive, symptomatic of an enormous gap between the rich and the poor.  At the same time as people everywhere are getting hungrier, trillions of shillings have just been spent on military hardware, plans are for billions to be spent on the presidential swearing-in and all the politicians involved in the CHOGM corruption case have been absolved by Parliament.  All this is spelt out day after day in the surprisingly free Ugandan press, and to a similar level of detail as the surprisingly explicit newspaper reports on the inadequacies of the country’s education system.  Inefficiency and ineffectiveness are not secrets here, they are just tolerated for far longer than you would expect.  However, when people in Uganda have had enough, they can get really angry.  The difficulty then, however, is that they have no way of expressing their feelings, for demonstrations are not allowed (except under the law, which does not seem to count).

So what have Ugandan children seen over the last couple of weeks?  They will have seen even more soldiers and policemen than usual on the streets, often accompanied by tanks.  They may have seen clashes between police and demonstrators, stones being thrown, guns being fired – not just in Kampala but in towns and cities across the country.  They may have been in the two Kampala primary schools and the hospital into which the police threw teargas canisters. Some of them may have been the weeping infants we saw splashed across our newspaper pages, rubbing their eyes while their teachers tried to calm them.  Some of them will have been in the houses down the street from our office when the police fired teargas at demonstrating students.  They will have watched the shouting, heard the gunfire and suffered from the teargas which seeped into their homes.  Some young people will have watched people being shot, the pregnant young woman on the way to meet her husband who was shot in the stomach, for example, or the three people in Gulu.  Admittedly, the unrest is sporadic and localised, but it is also unpredictable and volatile.  Many areas remain quite calm and people go about their business in the usual way.  However, to a child that could be even more frightening.  Not knowing what to expect is stressful.

Some Ugandan children may have been even closer to violence and death.  At the same time as their parents and older siblings have been out on the streets ‘walking to work’, young people in a number of secondary schools have also been protesting.  You see, even the patience of Ugandan children sometimes runs out.  Some have been objecting to fairly trivial sorts of things: whether boys and girls should be allowed to sit beside each other during ‘prep’, for example.  Others have been complaining of lack of food at school, inadequate medical care, and insanitary, unemptied and foul pit latrines which are threatening to flood, or even collapse.  And what did these protesting teenagers, and their unprotesting peers actually see?  Policemen being called into their schools by teachers and firing live bullets.  In one school this week such action resulted in the death of a sixteen year old girl.  Violence like this is not a new phenomenon: in 2009 policemen armed with AK-47s descended on one secondary school where students were striking and shot several rounds of bullets that left two students critically injured.  Children in Uganda see things which those in many other parts of the world rarely witness.

What do incidents like these tell us?  I said earlier that one thing Ugandan school children rarely experience is the opportunity to disagree with others, to challenge, to argue, to dispute.  They are expected to be passive and to absorb what they are told, without questioning.  Their views really don’t matter that much.  Their elders are always right, just as, at national level, the leaders are always right.  As a result, young people rarely learn how to disagree without being violent, or how to demolish their opponents using rational argument.  Hence the volatility, and the rapid descent into violence and even lynching among people who might have been laughing and joking only moments before.  Yes, lynching: about half a dozen cases in the last couple of months, one in our local shopping area.  And just as young people may over-react and the man in the street may over-react, so do the police.    After all, they have been through just the same educational system as the people at whom they shoot.  The political system does not tolerate dissent, protest or demonstration, so what is left is violence: violence by those with a grievance and violence by those in charge of public order who have never learned to cope with opposition, challenge and change.
Posted by Elisabeth Ritchie at 9:44 PM