What is the connection between Scotland, Uganda and Zanzibar?

Dr Livingstone, you may presume.  And you will be right – well, almost.

David Livingstone, born in Blantyre in Scotland, began and ended many of his expeditions in Zanzibar, including his attempts to find the source of the Nile – which is, of course, in Uganda, though he spent much of his time searching in the area between Lake Nyasa (now Lake Malawi) and Lake Tanganyika (in what is now Tanzania).  The good doctor never actually visited Uganda, as far as I know (though I am not a Livingstone expert) but he jolly well should have, which is a good enough connection for me.

Other connections?  The Ritchies’ May holiday, of course.

It was some journey.  Leaving Entebbe on the westernmost shore of Lake Victoria, we flew right over the lake towards the east, gazing down at low green islands which reminded me of Islay and Coll.  The lake seemed never ending.  Then, eventually, we saw land and began travelling across the huge land mass which is Tanzania.  We looked down over the Serengeti  - mile after mile of savannah – and the Rift Valley and then more miles of savannah.  All of a sudden, a magical sight appeared on our left: Mount Kilimanjaro, the summit at eye level, wreathed in clouds.

The plane dipped down for, amazingly, there is actually an airport called Kilimanjaro.  A quick turnaround and then off again for Dar es Salaam, a dash through passport control, a quick purchase of a visa, then - oh, the relief of it, we made the connection - on again to the Spice Islands.  Romantic names, all of them, but none more so than that of our final destination: Zanzibar.

What comes to mind when you think about Zanzibar?  Spices, sultans and, yes …. slavery: all connected, of course.  And the connections stretch back all the way we had come, back across mainland Africa, deep into the countries which are now called Tanzania, Zambia and Malawi.  The African chiefs sold their defeated enemies, and, indeed, their own people, to the Arab slave traders, in particular to Tippu Tipp who had a house in Zanzibar.  The slave traders marched their captives in chains to the eastern shore.  There they loaded them into dhows, offloaded them in Zanzibar and sold them to the Sultan and his fellow Omani Arabs, who then either sent them further north to the Horn of Africa and Arabia or put them to work in their own spice plantations. Connections between places made by a trade in people that changed lives for ever.

Zanzibari slaves were, apparently, relatively well treated compared with those who were shipped to the West Indies and Americas from West Africa.  They were often given plots of land to work.  Mothers were rarely separated from their children. Many slaves gained their freedom, becoming gardeners and farmers.  Ironically, some even became leaders of slave caravans or masters of slave ships.  None of this, however, compensates in any way whatsoever for the loss of family, roots, culture, language or home.

And how did this terrible trade come to an end?  Through the work of David Livingstone, of course.  He gave a passionate speech about slavery  to the Universities of Oxford and Cambridge.  The universities set up an organisation, Universities Mission in Central Africa (UMCA), to fight slavery.  The UMCA set up its headquarters in Zanzibar after so many of its missionaries died of disease on the mainland.  It persuaded the Sultan to set the slaves free and sell them the land on which the slave market was built.  The UMCA erected the Anglican cathedral on the site of the market, a school next door, and a hospital on the site of the holding cells.  Making connections – Scotland, Oxford, Zanzibar - changing lives, for ever.  The slaves once freed, however, had lost their own connections to their native lands and could never go back, even if they had managed to find the way.

Another Scot, Dr John Kirk a son of the manse in the small town of Barry in Angus in north east Scotland was instrumental in bringing out about the end of the trade within Zanzibar itself. Kirk was a medical man attached to the British consulate in Zanzibar, with strong links with the sultan and his family.

And what is Zanzibar like now?  Well, we stayed in Stone Town, the old part of Zanzibar Town and a World Heritage site.  It’s a warren of narrow winding streets with tall old buildings built of coral from the reef which encloses the island.  It’s really quite dilapidated now, with many of the structures quite literally falling down. 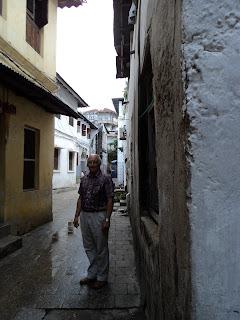 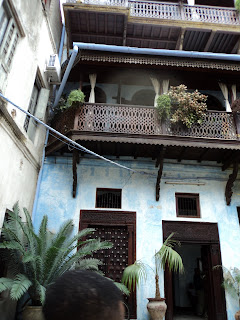 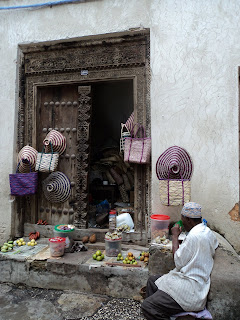 Once grand buildings face inwards into courtyards and entry is through heavy wooden doors, many of them intricately carved.  Indian traders came here as well; in fact, one of the most famous sons of Zanzibar is Freddie Mercury.  Indian doors had heavy brass studs, ostensibly to protect them from elephants, and Indian womenfolk were able to survey the streets from beautifully carved wooden balconies.  Arab doors are often inset with verses from the Koran. 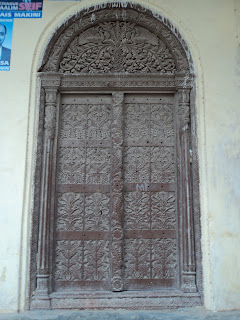 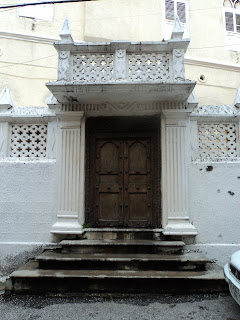 The Sultan and his family and followers brought their faith with them from Oman.    Although in 1964 the Sultan and the dominant Arab community were overthrown during a bloody uprising shortly after independence from Britain, Islam has remained the faith of almost all of the largely African local population: about 95%.  Many of the Zanzibari women are far more heavily veiled than we have seen elsewhere in Africa, though many are also resplendent in brilliant scarlet and turquoise. Strangely enough, the leader of Zanzibar's revolution was a Ugandan, John Okello, who had been living in Pemba, the nearby island. During the revolt it is said that more than 17,000 Arabs and Indians were killed in one night (though some sources give a much lower figure).


We were fortunate enough to stay in a beautiful old building, Tembo Hotel in the heart of Stone Town, which had been sensitively renovated and tastefully furnished in the old Indian/Arabic style.  It looks right over the sea, towards the mainland, and from our balcony we could see the dhows weaving in and out between the modern ferries and container ships.  Every morning we ate our breakfast on the terrace: pawpaws, pineapple, water melon, bananas, Zanzibar coffee spiced with cardamon and black pepper, fresh coconut milk drunk straight from green coconuts, little eastern pastries.  And the service was excellent – we can thoroughly recommend the Tembo Hotel.


Zanzibar retains its connections with the past – the best of it, that is.  The worst is gradually crumbling away.  The dhows we watched look just the same as they did in Livingstone’s time.  The food is as much Arabic as African: delicious freshly caught fish flavoured with delicately spiced sauces.   The Taarab music for which Zanzibar is famous brings the two main influences together.  Even the language – Swahili – is an amalgam, of Arabic, local African languages and even some Portuguese, from the merchants who were in Zanzibar before the Arabs arrived.  And the people, of course, the Zanzibaris, are very different from other Tanzanians, with their mixed Arab and African ancestry, their connections stretching back into the mainland and over to Arabia and even across the Indian Ocean to India itself.

The Sultan, like other wealthy Arabs of the time, had many concubines as well as wives.  While in Zanzibar, I read a fascinating autobiography by Princess Salme, who was born in 1840, daughter of Sultan Said the Great by a Circassian (Russian) slave, one of his thirty-six concubines.  Other concubines came from mainland Tanzania and elsewhere in southern and eastern Africa, including some from Abyssinia, modern Ethiopia.  The children of these concubines were accepted as legitimate heirs, lived a comfortable privileged life like the one described by Salme, and, through their own children and grandchildren, added to the racial mix of Zanzibar.  Lives changed irrevocably over just a generation or so.  Salme herself eloped with a German who lived in the house next door to the Sultan’s palace, much to the fury of her brother, the Sultan Barschad, changing her life forever.   Sadly widowed within three years, she remained stranded in cold colourless Europe, eventually writing her memoir to give her children some idea of their connections with her warm, exotic and much-loved native land.

Modern Zanzibar is proud of its complex history and identity.  Having only become part of Tanzania in 1964, many islanders now think that it is time to snap what to them is just a very recent connection and break free from the mainland.  They feel that their small group of islands with its distinctive culture has become lost and devalued within the larger whole.  Reminds us of another small nation uncomfortable with the domination of a bigger neighbour next door.  Perhaps Zanzibar's connections with Scotland are stronger than it realises.

PS.  If you can get hold of it, do read Memoirs of an Arabian Princess from Zanzibar by Emily Ruete, Princess Salme of Zanzibar and Oman.

The Last Slave Market by Alastair Hazell is a fascinating account of the slave trade across East Africa, its hub in Zanzibar and the way its tentacles spread right across Arabia. The book follows the efforts of Dr John Kirk in recording and bringing an end to the slave market in Zanzibar itself.

Posted by Elisabeth Ritchie at 10:23 AM