We go, we go, Uganda Cranes we go!

As my good friends know, I am not a football fanatic.  Indeed, I am ashamed to admit it but I have only been to three games in my life, and one of the three is the subject of this blog.  However, I know enough about football from the front pages of newspapers to be aware that it is not entirely unknown in any country for the police to intervene to deal with rowdy crowds.  We British are used to the sight of long-suffering police putting up with boorish behaviour and doing their best to contain and restrain.  Uganda does things slightly differently.  Here, it's the long-suffering crowds who deserve the commendations.

Kampala woke up in a state of excitement on Saturday.  Namboole Stadium, not far from where we live, was due to host its home team, the Cranes, playing against Guinea Bissau in the Africa Cup of Nations qualifier.  The Cranes were the favourites and long before kick off time at 4pm, the sound of vuvuzelas could be heard right across the city.  Shortly after lunchtime, our minibus joined the crowds of matatus and boda bodas streaming out of town along the Jinja road towards Namboole.  The crowds were in great spirits.  Packed three or more to a boda, they blew their whistles and sounded their horns, some standing on the seats, 'musical' instrument in one hand and bottle of waragi in the other.  No arrests for 'ride-and-hoot'on Saturday!


On arrival, we all trooped up to the main gates, clutching our tickets.  Just as in the UK, bizarrely attired young men mingled with sedate-looking families, toddlers clutched their siblings tightly by the hand, mothers balanced their babies on their hips, all in good spirits, all just walking along.   Just about an hour to go, so plenty of time to get in.  Or so we thought.  However, those in charge thought rather differently.  Despite the fact that already a lot of people were in the stadium, just as we got to the tall metal gates, they were slammed firmly shut.  The crowd waited patiently in the hot sun.  Ugandans are used to waiting.  A young man fainted, to be hauled off by his friends.  Minutes passed, fifteen minutes, half an hour.  A gate inched open and was pushed back into the crowd.  Predictably there was an immediate movement towards it - not a surge, just a change of direction.

And then, there they were, the police.  Uganda has quite a variety of uniformed men.  There are the ones in blue camouflage - presumably so they can hide against a cloudy sky.  There are the sinister black-uniformed security police.  There are the police in khaki and red berets - military police, for Uganda is quite accustomed to using its army against its own people.  And then there are the Robocops, ten feet tall and armoured from head to foot.  Namboole Stadium was lucky: it had them all.


Immediately the crowd stepped back, and back, and back.  I started feeling a bit squashed and slightly rattled, while Stuart stood square and solid in front of me.  'Don't mess with me, ' said his demeanour, 'I used to be a hooker (of the rugby variety).'  Brave young men remonstrated, waving their tickets in the air.

And then, a quick movement, and out came the 'canes', long pieces of wood (not bamboo, as I used to think).  Down they came on people's heads, shoulders or whatever was in reach.  The cane closest to me had a nail projecting from the end.

'I don't think it's a good idea to take pictures,' said Stuart.  I stopped.

By this time, there were just minutes to go.  The police forced the crowd back from the gate.  Two or three landcruisers lurched forward and barged towards it, their passengers too important to be excluded like the rest of us.

We looked up at the nearest Robocop.  'Can you help us? We've got tickets for the VIP stand.'

He looked down.  A thought flickered through his brain: mzungus, better let them through, or there might be trouble.  Privileged by our skin colour, we were ushered through the gates, hearing them bang shut behind us.

There is very little to write about the rest of the afternoon.  The stadium was packed, a mass of yellow and red.  If Guinea-Bissau supporters had managed to make it to Kampala, they were not making themselves obvious.  The crowd were in good form, impeccably well behaved, clearly enjoying themselves and applauding enthusiastically at even the most pathetic attempts at a goal.  The cacophony of whistles and vuvuzelas battered our ears and left them throbbing.  The nearest to misbehaviour was at half time when a foolhardy young man rushed onto the grass and was hauled off by about thirty policemen: well, they needed to find something to do.

Not even the players misbehaved.  There were hardly any fouls and no melodramatic writhings on the ground.  The only wobble was when a petulant David Obua threw his shirt down by the Cranes' bench and stomped off, miffed at being substituted in the second half - he must have learned that sort of behaviour at Tynecastle.  The cheers turned to boos, but not for long: people were enjoying themselves too much.   The game was not exactly sparkling.  However, the Cranes eventually managed a couple of goals and the crowd roared ecstatically.  The end came, the music started and the dancing began. Bobby Williamson could have the freedom of Kampala. Even the police looked happy. 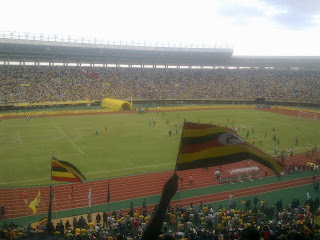 And we were happy too.  Despite the best efforts of the law-enforcers to goad them into violence, the fans had kept their cool, determined to enjoy themselves. Whether or not that will be the case when Uganda plays Kenya (cf Scotland v England) will be a story for another time.


Posted by Elisabeth Ritchie at 2:44 PM