Nearly a year in Uganda and no sight of a lion, or indeed a zebra, let alone a lion eating a zebra.  We've seen elephants, buffaloes, baboons and chimpanzees a-plenty, but lion-less we remain.  So, in the next two or three weeks we’re going to be off on another wonderful trip to see lions wandering through Queen Elizabeth Park and (we hope) climbing trees at Ishasha, while taking in the zebras at Lake Mburo on the way.  That should do the trick…

Well, as it happens, perhaps we didn’t need to book our August safari after all…  Through some bizarre turn of events, it turns out that one of the best places to see a lion these days is Doncaster, that well-known tropical holiday destination.  During your safari through the South Yorkshire drizzle you can spot impala, zebra, camels, flamingos, ostriches and six, yes six, prides of lions.  I can vouch for it.  I flew 5,000 miles from Entebbe to Edinburgh and then drove another 300 miles south only to see the animals I’d left behind me on the plains of western Uganda. The irony of it!
My peregrinations around the British Isles got me thinking that there is far more linking Uganda and Britain than you might think, and I'm not referring to their shared colonial history.

When I left Uganda the newspapers were full of corruption stories.  You’ll have read a few of them in some recent posts: the syphoning off of education funds, health staff selling hospital supplies, that sort of thing.  The last couple of days’ newspapers since I returned have added more accusations: that during the 7th Parliament the Deputy Speaker bribed MPs to support the lifting of presidential term limits; that the Intelligence Services Coordinator is refusing to hand over the official residence of the Mayor of Kampala; and that a city tycoon has been stealing water from the National Water and Sewerage Corporation.  The usual stories, typically African bribery and corruption, you may consider.  But just think about it.  When I arrived in the UK two weeks ago, what were the stories?  Phone hacking, illegal payments to the Metropolitan Police and well-respected and not-so-well respected members of society tumbling down their greasy poles.  The difference?  In the UK, the privacy of grieving families has been destroyed.  In Uganda, children are denied their fundamental rights to education and, too often, to life itself.  Different outcomes but with very similar origins in greed, selfishness and a callous lack of concern for other people’s welfare.

What else in the UK reminded me of Uganda?

‘What?’ you exclaim.  ‘Africans die young, everyone knows that, and in the UK people are living longer and longer.’

Indeed, all apparently true.  However, not everyone in the UK dies at 85 or 90.  Life expectancy in Uganda is 53.  Life expectancy in the east end of Glasgow is 54.  And it’s probably not much higher in parts of Liverpool or, indeed, South Yorkshire.  Britain is a divided society – as is Uganda, of course, though middle class Ugandans tend to die of similar conditions to those suffered by their poorer compatriots.  Ugandans die of the effects of HIV/AIDs, tuberculosis, malaria and, if they are women, in childbirth. In Glasgow, well-off people live just as long as elsewhere in the UK; poor people die prematurely of heart disease, strokes and cancer linked to smoking, alcohol and substance abuse, lack of exercise and a poor diet.  In Uganda, people get plenty of exercise and rarely smoke, though some of them drink a lot (highest in East Africa and one of the worst levels worldwide).  Their basic diet is healthy: lots of fruit and vegetables, a bit of chicken, some eggs, a bit of beef, goat or pork and staples such as beans, maize, rice and matoke (plantain).  Of course, not everyone can afford to eat a balanced diet, but they would if they could, unlike many Scots (though we must mention the praiseworthy efforts of Glasgow City Council and its schools and, indeed, of the Scottish Government, to improve young people's diets).  Sadly, in this fertile country of Uganda 40% of all child deaths before the age of five are linked to malnutrition.  Poor people in the UK tend to be fat, poor people in Uganda are always thin: one of the other ironies of life.  However, the truism is that poor people die early whether they live in Scotland or Uganda.

When I arrived in South Yorkshire, the east of England had been declared an area of drought.  It had had no rain for weeks, the ground was hard and water supplies were getting low.  My mother was worried about her tomatoes and we’re keeping our fingers crossed about the raspberries.  (I know, I know, I started off this piece talking about Yorkshire drizzle.  That was sod’s law and clearly related to my arrival.)  However, to my knowledge, no one in Yorkshire has died of thirst.  When I left Uganda, the East African drought which has received so much coverage on the UK television, had already had a major impact on the east and north of the country.  Karamoja, Teso and the Kenyan border area have missed out on the rains which eventually arrived in the rest of Uganda.  Food is scarce, wells and water courses have dried up and animals are dying.  Actually, food prices are rocketing right across Uganda because of shortages caused by the late rains and high fuel prices. Many people throughout the country are surviving on one scant meal a day, including the children in Royal Pride Academy (of which more in a later post).  Unlike in Scotland, the government here has absolutely no interest in ensuring that the nation’s children receive the nutrition they need to be able to learn effectively: that, it points out is their parents’ responsibility. Government-aided schools are not allowed to provide meals, even if the children pay for them, though many ignore this instruction. Indeed, headteachers have been taken to court for feeding children (compare this with Scotland's Hungry for Success initiative).  Mrs Thatcher would applaud.  However, in the north and east, the situation is far worse than in central Uganda, yet another symptom of climate change.  When I arrived back in Kampala last Wednesday, the newspaper headlines referred to the first deaths from ‘famine’ in the east of the country.

The concept of what constitutes 'drought' is clearly relative, as is the concept of what constitutes a ‘rainstorm’.  As I drove into Glasgow, the heavens opened, the rain poured down and lightning streaked across the sky.  ‘Monsoon rains,’ said the television commentator on BBC Scotland.  Well, not quite.  Come to Uganda and I’ll show you rain!  We may have had unreliable rainfall this year, but when rain comes it rains properly!

So that’s it, really.  We are inhabitants of a global society.  There is more that joins us than divides us and sometimes our differences are just a matter of degree.  I am sure the zebras would agree with me as they chomp on their pale Yorkshire grass under a feeble cloud-covered sun. 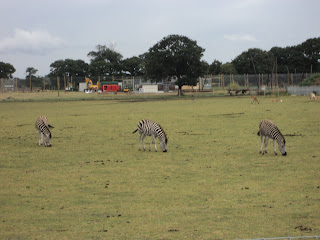 Posted by Elisabeth Ritchie at 7:39 PM