Highland lochs and braes - in Uganda, that is

'Is this the main road to Kabale?' I innocently asked, observing the rutted murram and muddy potholes threatening to ground our vehicle. 'Oh yes,' came the replies, answering the straightforward question about 'main' as in 'most direct and frequented route' but ignoring the subtext of 'main' as implying tarmac, good condition and speed of travel.

It certainly is a beautiful road, whatever its quality. We could have been in the Highlands of Scotland, or the lower reaches of the Alps. 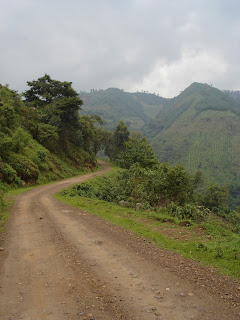 The road snaked ever upwards, following the southern route of the Great Rift Valley. We looped round Bwindi Impenetrable Forest: we would be visiting the gorillas some other time. Just as well for when we got back we saw that Andrew Roberts had marked the words 'rotten road' against the route we would have taken. And we went up and up and up and up. We kept expecting to go down, but no, we kept going up. We twisted and turned, fortunately meeting very little traffic apart from the odd herd of cows, the usual kamikaze goats, small children calling 'Mzungu, mzungu!' and the inevitable boda bodas and matatus which penetrate even up here. Every so often we slowed almost to a stop as we negotiated deep ruts running right across the road, carrying entire water courses.

The views differed from the Highlands of Scotland in that the forest continued on up to the highest reaches while the valleys in between were intensively cultivated.  Think pre-clearance Sutherland or 20th century Italy or France. Every square inch of the ground was being used to grow crops, using a similar system of terracing as we British marvel at in Europe. 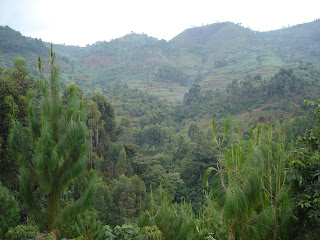 It was difficult to remember that only the previous day we had been gazing across wide tracts of savannah. The same country, but so different! The south-west of Uganda is commonly acknowledged to be the most beautiful part of this very beautiful country. 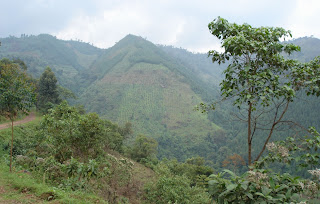 The road went on and on. 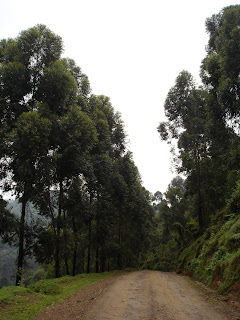 For most of our journey, the forest closed in on us from both sides, only opening out for the occasional trading centre; that is, until we approached the highest point in our route before we made our long-awaited descent to Kabale. Then we did start to meet traffic: diggers and dumpers and huge lorries loaded with timber. They had begun logging here, centuries-old timber being felled to make 21st century money. We passed hillsides denuded of cover. It was the rainy season and before long all the ground soil would be washed down into the valleys and rivers. An old old story, one we know only too well. In fact, by the time we arrived back in Kampala a few days later, the newspaper stories had already been published. Kigezi in panic as rain shows no signs of ending was the headline in the Daily Monitor. The first sentence started, 'Residents of Kabale, Kisoro, Rukungiri and parts of Kanungu districts are in panic....' and the rest of the article referred to risk of landslides.

However, we carried on, despite the periodic patches of mud and streams washing earth and stones across our way. The highest point of the road was probably about 2500 metres and then it fell quite rapidly to the Kabale valley. We weren't actually going to Kabale. We were going to Lake Bunyonyi, one of a cluster of lakes in the region, some in Uganda and some in Rwanda. Of these lakes, Lake Bunyonyi is renowned as being the most beautiful. Formed quite recently, only 8,000 years ago, it is the result of lava from one of the many volcanoes in the region blocking the outlet to a valley.


The word 'magical' is often used of Lake Bunyonyi, and quite rightly. The lake has many inlets and islands, and curls its way along, and eventually right up to the national border. The hills you see in the distance are in Rwanda.

Rwanda is, of course, known as Le Pays de Milles Collines, the country of a thousand hills. Geologically, geographically and, in some respects, linguistically, this south-western corner of Uganda should belong to Rwanda. It shares its topographical features, its hills, its forests and its lakes. Not 'belong' in modern political or historical terms, of course, given the pretty arbitrary decisions made by the European powers towards the end of the nineteenth century which led to rather different historical fates for the peoples through whose land they scored lines with black pens and rulers.

However, there are cultural similarities between the two nations. Like Rwanda, western Uganda  traditionally made a distinction between Tutsis and Hutus, cattle rearers and growers of crops, here called Bahima and Bairu. However, the colonial British made less of the distinction than their neighbours the colonial Belgians, who demanded it be recorded on Rwandan identity cards. The current President of Uganda is by origin a Bahima, just as the current President of Rwanda, Paul Kagame, is a Tutsi. They were educated at the same school, became good friends and fought in the same wars. Many Rwandan Tutsis have taken refuge in Uganda over the years, long before the most recent massacre in 1994. At various times there have been as many as 250,000 Rwandans living in Uganda. Kagame and his Rwandan exiles helped Museveni fight the bush war during the 1980s. The armies of both countries pursued the Hutus into Congo in the late 1990s, and both have been accused by the international community of committing atrocities against the local Congolese and pillaging that country's resources. The relationship between Rwanda and Uganda has been a bit more strained in recent years, though there was a 'making up' last month when Museveni visited Kigali. Since the 1994 massacre, Rwanda is considered by many in the west to have leapt ahead under what many commentators consider to be the benign autocracy of its leader. (See the post Growing up in Uganda for some of the differences.)

However, be that as it may, Lake Bunyonyi is staggeringly beautiful. We were staying in Arcadia Cottages, up on the hill above the lake, and looked out on this view and its changing appearance throughout the day.


As you would expect, we spent a morning exploring some of the islands.  A Scottish haze hung around them throughout the day, the sun breaking through only occasionally.


We weren't the only ones out on the lake. Boats are the only way people can get around. Some are dugouts like these. 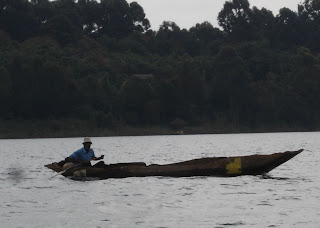 Others were more familiar craft, sometimes a trifle crowded. 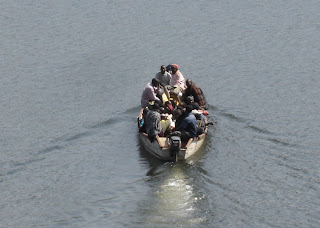 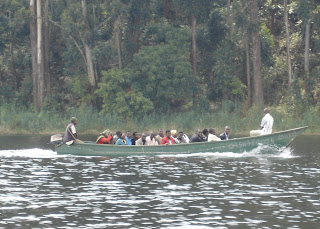 Apparently the death toll on these boats is quite high. Storms can blow up quite quickly and few Ugandans know how to swim. The Heart of Edirisa community, from which we hired the boat, teaches local children how to swim. It also encourages local crafts and supports local schools, as well as organising canoe trekking around the lake.

We passed Akampeine (Punishment) Island where pregnant girls used to be stranded unless a man was prepared to marry them without a bride price. Not much there to sustain you. 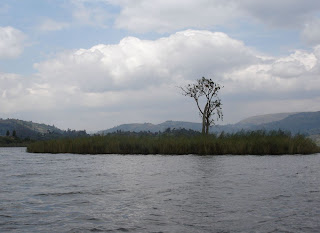 On Bwama and Njuyeera Islands, Dr Leonard Sharp, a missionary, opened a leper colony in the 1920s which only closed in the 1980s. The buildings are now used by a school.

Opposite these islands is Bushara Island, run as a community project by the Church of Uganda and local partners. It supports agricultural and craft projects as well as the campsite and restaurant. One of their projects is a pig lottery. Members have the chance of receiving a pig in a lottery and when the pig litters, have the responsibility of handing on a pig to another member, quite an ingenious method of encouraging self-reliance. After a very pleasant walk around the island we embarked again for our return.


On our way back, we passed terraced shores and hillsides, every square inch of which was utilised. We even saw an otter, but not quickly enough to photograph it.


One thing which surprised us about Lake Bunyonyi was quite how cold it was. I suppose it is 2,000 metres above sea level. Tim and Ruth hadn't quite believed me when I told them to bring their fleeces, especially after baking in the sun only a couple of days earlier.

In the morning we woke up to a Scottish mist. Gradually, the lake revealed itself: a truly 'magical' sight. 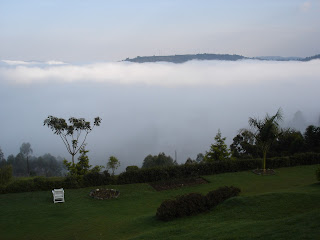 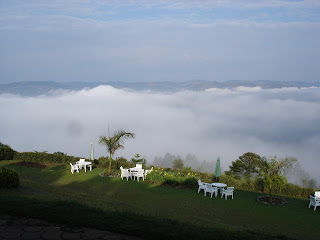 So, it was home from home, for Stuart and me. Cool mountain lochs, wooded braes and Scottish mist, all in Uganda: who would have predicted it! 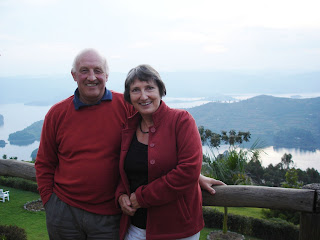 
Posted by Elisabeth Ritchie at 2:17 PM