Most people in Britain have heard of Kenya’s Rift Valley over to the east. We know of the Leakeys and their anthropological findings; we have read less than creditable tales of the privileged ‘white settlers’ and their antics; and, more recently, we have heard holiday stories from the many visitors returning from organised tours.

Fewer people, perhaps, have heard of Uganda’s Great Rift Valley to the west, which is even longer than Kenya's eastern stretch, and is different but just as impressive. Perhaps this is because the proud country of Uganda, a British protectorate and never a colony, had relatively few British settlers to write their memoirs and send their stories home, and even fewer tourists.

The Western Branch of the East African Rift Valley is what divides Uganda from DR Congo, and East African grasslands from the tropical forests of West Africa. The border is marked by the Blue Mountains of the north and the Rwenzoris of the central stretch. Our friend Tommy has just climbed the highest peak in the Rwenzoris, fully equipped with ice axe and crampons. Once it reaches Rwanda, the Valley continues south along Lake Kivu, through Burundi and down the deep valley of Lake Tanganyika, a name which resonates with any stamp collectors of the 1950s: ‘Uganda, Tanganyika and Nyasaland’, the latter now Tanzania and Malawi. 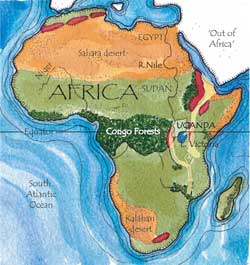 The journey through what is known - while it is in Uganda - as the Albertine Rift Valley, is an impressive one. The landscape changes from the grasslands and river estuary of Murchison Falls National Park in the north, to the wide plains of Semliki, then on to the Mountains of the Moon (Rwenzoris) described by Ptolemy, taking in lakes with strange Victorian names on the way: Lake Albert, Lake Edward and Lake George.  The latter used to be called Lake Beatrice until it was thought that something manlier was required. These lakes are part of the extensive Queen Elizabeth National Park (QENP) which borders DR Congo. Lake Albert and Lake Edward are actually bisected north/south by the Congolese border. The lakes mark the places where plates have moved. Indeed, the whole area is dotted with crater lakes and still experiences periodic earthquakes, as we ourselves can lay witness to. The Virunga range to the south, part of DR Congo, still experiences volcanic eruptions, for instance quite recently in Goma.

The Ugandan Rift Valley, the flat savannah between the western mountains and the eastern escarpment, is what is described as an ecoregion or biodiversity hotspot and has been recognised by UNESCO as a world bio-sphere reserve. It supports more vertebrate species than any other part of Africa, including 1061 bird species (half of Africa’s total and including 41 endemic and 25 threatened species) and 402 mammals (34 of which are endemic). It boasts 175 reptiles, 16 of which are endemic. (Thank you again, Andrew Roberts.)

We have been doing the journey down the Rift Valley in stages, our most recent expedition being with Tim and Ruth as we travelled from douce Fort Portal in the north, across the Equator near semi-industrial Kasese, through the grasslands of QENP and Ishasha to magical Lake Bunyonyi in the south. We have already described parts of the region in our posts on Kibale and Kyambura and, last Christmas, in our post on the Kazinga area of QENP. The northern area of the Rift Valley is quite often in the news these days because oil has been discovered in Lake Albert. However, that is a story for another day.


We were lucky: we saw lions within minutes of entering the park. The clue is to look out for the Uganda Kobs (antelopes), which feature high on the big cats’ menu. Locals, however, are less thrilled than visitors by the proximity of lions. Not long before we arrived, lions had killed four cattle from the Kasenyi area of the park, precious food and, indeed, investments for a very poor community. Villagers receive no compensation for such depredations, of course. In response, six lions had been poisoned. The Uganda Wildlife Authority (UWA) does its best to keep the delicate balance between humans and animals, but their policy is clear: animals come first.

One of our indelible memories will be of a nervous Uganda Kob, dancing metres in front of a group of lions, approaching and then retreating, wagging its tail the while. Was it a version of ‘chicken’? The ranger said the kob was a territorial animal and the lions were occupying its patch. It was just keeping an eye on them. And who said antelopes are nervous creatures? That kob deserved the Victoria Cross.

As a first-time visitor, one of the most striking experiences is to to see animals all round you, even along the main road from Kasese to Mbarara, which runs right through the park. A wonderful sight during the day, but a very good reason not to drive at night.

Given the priority given to animals, there are few enough ways for humans to make a living within the park. The descendants of hunters who were forcibly moved from their original villages, local people now work for the various safari camps, unofficially doing a bit of poaching on the side. They make salt from some of the crater lakes and take fish from others. They do the upkeep on the safari tracks which criss-cross the grassland. However, they are not allowed to engage in farming or do anything which would affect the natural landscape or vegetation of the grassland. The desperate poverty of the local people is in notable contrast to the smart jeeps and binoculars of the visitors.


As you might expect, visitors are encouraged to follow certain straightforward guidelines when entering, or staying near to the national parks. Rangers and managers of safari camps will give you the following useful tips.


You will have complete recall of all this helpful advice, of course, when you next meet a lion at the top of a tree, or are bitten by a snake after mistakenly stamping on its tail. It’s hard work being a visitor to a national park: so much to remember, so many opportunities for muddle and confusion.


As before, we stayed in the very comfortable Jacana Safari Lodge, in Maramagambo Forest just below the eastern escarpment and on the edge of the wide savannah which stretches all the way to Ishasha in the south. Tastefully furnished with genuine wood carvings and other artefacts, the Jacana doesn't have a single zebra print in sight. The rainy season having arrived two or three weeks early, our Landcruiser found disengaging itself from the mud on the approach road quite challenging, despite the four-wheel drive. We slithered across the ruts and hoped we didn’t meet an elephant. Remember the advice: stay still or reverse. Staying still OK, reversing not possible!


Our pictures of lions are rubbish and we didn’t managed to snap the leopard we saw slinking away through the grass. However, we had a wonderful afternoon spotting pelicans and fish eagles – and even a rare shoebill (or possibly a spoonbill, ornithology not being our strongest point) - on the Kazinga Channel.

And then it was down to Ishasha, following the line of the escarpment which marks the easternmost limit of the Rift Valley . We drove for 70 kilometres on deeply rutted muddy murram roads, across grassland dotted with gum trees and acacia. By some quirk of the signposting (it was the wrong way round), we missed the turning to the Ishasha National Park itself. After about 20 more unnecessary kilometres we realised we would soon be at the Congolese border post: the huge lorries thundering down the murram road were a clue. At that point, Stuart pointed out that we would soon need some diesel. He had been unable to buy any from the now defunct petrol station on the escarpment before we left the Jacana, and had thought it best not to worry me with the information when we set off.  After some gentle constructive discussion, we decided that we probably did have enough after all, certainly enough to look for tree-climbing lions and then free-wheel down the hill to Simba-Mitti camp where we were due to stay that night.


We picked up a ranger at the Ishasha UWA camp on the Congolese border, which doubles up as a Uganda Peoples’ Defence Force encampment complete with tank, and drove alongside the border scarcely a couple of hundred yards away. We saw wonderful creatures: eagles and vultures, herds of antelope... We didn’t, however, see the tree-climbing lions for which the area is famed. Lions being lions, they didn’t bother much about the border and had clearly wandered off to the other side. They are interesting creatures, these lions.  The tree-climbing Ugandan lions are exactly the same species as their Congolese cousins, except that the latter haven’t learned to climb.  Apparently this knowledge is passed down from Ugandan mother to Ugandan children, and the Congolese haven’t grasped it yet.

However, we had seen plenty enough treasures. It was late afternoon and our permit was running out. It was now time to find a safari tent and some diesel. We turned off the 'main' road – the signs were quite clear: Simba-Mitti camp. It had been raining recently and the road to Simba-Mitti was awash: metre after metre of muddy water of indeterminate depth. The Landcruiser sank down well over its running boards and half way up the engine, but fortunately kept going. Eventually we saw the turn off. Simba-Mitti was a new camp and we were probably among its first visitors. We struggled through the mud, down into the hollows and up the other side, but where was Simba Mitta camp? Who knows? To this day we have no idea where the camp was hiding. We looked at the sky.  More rain threatened, hardly any diesel, a high chance of being trapped by rising floodwater. It was time to cut our losses. A quick phone call and we elicited the fact that the Savannah Resort Hotel 30 kilometres down the road on the road to Kabale could take us. And there was diesel in the nearest village.

So, a comfortable banda instead of a flooded safari tent that night: an oasis of comfort before we moved from the savannah of the north to the mountains of the south. It was helpful to be reminded to leave one's firearms at reception. The Ugandan Rift Valley: we wouldn't have missed it for the world.


If you would like to learn more about the Rift Valley, I guarantee you will enjoy a wonderful book called Uganda's Great Rift Valley by Andrew Roberts. Very well written, witty and informative: I couldn't put it down.

More posts about the Rift Valley include the following:

Other posts about scenery, animals and travelling around:

Highland lochs and braes - in Uganda, that is
Gathering at the waterhole

Posted by Elisabeth Ritchie at 6:10 PM