Gathering at the watering hole

One of the great pleasures of staying at Mahingo Lodge is watching the animals at the watering holes below.


We spoiled ourselves for the last couple of days of our August safari. Mahingo Lodge in Lake Mburo National Park is special. Set on a rocky outcrop above a watering hole, it combines everything you could possibly want of a safari camp: comfortable tents with proper beds, plumbing and furniture, an infinity pool, a lovely bar and dining room sensitively designed to merge into the landscape, and all of them looking out over the savannah and down over one of the watering holes. The food is among the best we have eaten in Uganda. As the humans congregate at their own watering hole, they can look down at the animals gathering at theirs.


Lake Mburo is probably the least frequented and smallest of Uganda’s national parks, but it is a real gem. The River Rwizi feeds fourteen lakes in the area, of which five are within the park. Lake Mburo is the largest of these lakes. The park is also the nearest national park to Kampala.


Driving to Lake Mburo from Lake Bunyoni in the west, you pass the last low hills of the Great Rift Valley and enter wide expanses of grassland filled with acacia trees.


Wandering among the trees are great herds of buffalo, antelope and zebra. Indeed, it is the only place in Uganda where zebra can be found, similarly impala and eland.

Warthogs weave in and out among their larger grazing neighbours. 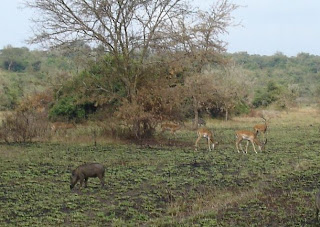 And birds are everywhere – 312 different species within 260 square kilometres.

The whole area was depopulated – and emptied of animals – by tsetse fly until the 1960s, but they have now come back, including the lions, which had been hunted to extinction not long afterwards  – not all that welcome to the local population and something of a concern to the staff at Mahingo’s stables.  The locals, as elsewhere in Uganda, have some reservations about land being set aside for wild animals when they need it for their own cattle. We saw Ankole cattle illicitly wandering not only in the outer reaches of the park, but even down to the watering hole. As we watched, an enormous eland - about the size of a large buffalo, or even a small horse - checked out a herd of infiltrating cattle before deciding it was quite safe for its own species to return.

It wasn’t the lions, however, which gave us a fright. Driving along the overgrown and winding tracks near the lake, we were suddenly aware of two hippos bursting out of the bush on the right, crossing the path within a couple of yards of our front bumper and disappearing towards the lake on the left. We remembered one of the first lessons we were taught out here: never get between a hippo and water. We had broken the rule without even realising. Hippos seen at close quarters are very very big. Fortunately, they were as spooked by us as we were by them, but I wouldn’t have reckoned much for our chances if they had decided to charge. The advice to zigzag away while veering to the left would have been difficult to follow, especially in reverse gear along a rutted track. We were just relieved that Stuart managed to brake before crashing into the nearest one. It would have made an interesting insurance claim.

Other wildlife we watched at a more reassuring distance: from Mahingo’s safari jeep and from their hide. Not much more to tell of the rest of our sojourn, which was far less eventful, apart from showing you the pictures. It is wonderfully restful. There is always something to watch whether bumping along in the jeep or sitting with a gin and tonic in your hand. You just have to go and see for yourselves.

Posted by Elisabeth Ritchie at 2:18 PM