A visit to the Bahá’í Temple

You cannot fail to notice the Bahá’í Temple as you follow the Northern Bypass around the edge of Kampala. There it stands, on the top of Kikaaya Hill, looking out over the rest of the city. The Temple is so different from anywhere else in this dirty crowded conurbation that even a casual passerby is struck by its beauty and by the quiet serenity of the surrounding gardens. 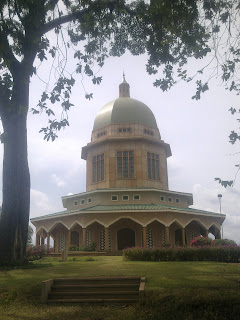 We visited the Temple as sightseers a few months ago, but today we were back as part of the congregation. The Bahá’í Temple in Kampala is the only one on the African continent, although there are places of worship in other towns and countries. Each continent has its own temple. Europe’s is in Frankfurt, though there are Bahá’í communities with places of worship throughout the UK, including in Edinburgh, Aberdeen and Glasgow.

The design of Kampala’s Temple is based on a vision of the oneness of mankind and the all-embracing nature of God, represented by the nine doors by which one can enter. There is no altar or dais. The structure is supported by nine big pillars and 27 smaller ones. Different countries contributed various building materials, symbolising the universality of the Bahá’í faith. The green dome is made of tiny glazed mosaic tiles from Italy, while the lower roof tiles are from Belgium. The walls are built of stone quarried in Uganda. Uganda also supplied the timber used for making the doors and benches. The window frames and fittings are from Britain and the coloured glass from Germany. 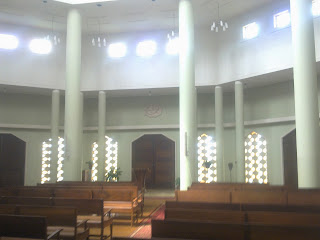 This morning the congregation probably comprised about 50 or 60 people, mostly Ugandans, but also some westerners and, possibly, a sprinkling of Asians or Arabs – difficult to tell. There were several children of various ages. During the service the doors are kept open, letting in the light and air, and also the birdsong. You can see through the open doors to the trees and flowers outside.

The service consisted of a number of what were called Songs, interspersed with Readings. There was no liturgy or ceremony at all. The Songs and Readings were taken from a range of religious sources: from the Bible and the Koran, as well as from some of the Bahá’í’ faith’s own texts such as the Writings of Abdu’l-Bahá and Bahá’u’lláh. A well-trained choir sang the Songs, again drawn from music associated with a number of faiths from across the world and culminating in a Persian/Arabic chant - and sang them beautifully. Members of the congregation delivered the Readings, which included a prayer in Ki-Swahili and another in Luganda. The rest of the service was in English. I have never been to a Quaker Meeting, but I have the feeling there are some similarities in their approaches to contemplation. 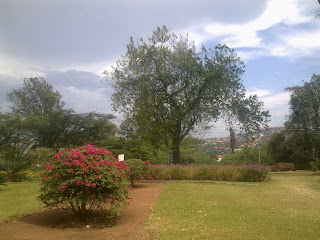 So what is the Bahá’í faith? I am no expert, but I have gleaned the following information from various official websites and from the information displayed outside Kampala’s Temple. The faith began in Persia, now Iran. Bahá’u’lláh (1817-1892), the Founder of the Bahá’í Faith, is recognized as the most recent in a line of Divine Messengers that includes Abraham, Moses, Buddha, Zoroaster, Christ and Muhammad. The central theme of Bahá’u'lláh’s message is that humanity is one single race and that the day has come for humanity’s unification into one global society.  Bahá'ís believe in:

The faith was founded in Iran in 1844 and now has more than five million adherents in 236 countries.  Bahá’ís come from nearly every national, ethnic and religious background. The faith reached Uganda in 1951 and there are now about 80,000 followers. Apart from a period in the 1970s during Amin’s rule when it was banned and some followers suffered badly, the Bahá’í Faith has been accepted as one of Uganda’s religions with the country’s customary religious tolerance. Notable public figures speak at its events, and a statement by President Museveni was read out at the fifty-year celebrations of the Kampala Bahá’í community held earlier this year. 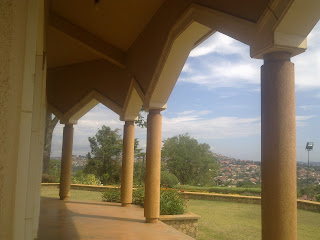 The principle of the unity of religion is at the centre of Baha'i teachings. Bahá’u’lláh states that just as a person begins life as a helpless infant and attains maturity in successive stages, so humanity is engaged in a collective growth process quite similar to this. So humankind began its collective social life in a primitive state, gradually attaining maturity. Bahá’u’lláh taught that humanity, after a long and turbulent adolescence, is at last reaching a stage of maturity in which unity in a global and just society can finally be established. To this end, the Bahá'í Faith prescribes laws of personal morality and behaviour, as well as social laws and principles, to establish the oneness of humanity. Bahá’ís support their local communities and believe in caring for other people. (Taken from the website of the USA community)

In reality, there is only one religion, the religion of God. This one religion is continually evolving, and each particular religious system represents a stage in the evolution of the whole. 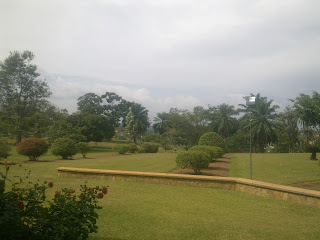 As one might expect, this belief that there is just one religion and that people of all faiths worship one God is not universally popular across the world, despite the tolerance the faith has been shown in Uganda. Followers of the Bahá’í faith are persecuted in Iran. Not only is it forbidden for young Baha'is to go to university there, but any teacher who attempts to provide them with higher education can be arrested and imprisoned.

We were impressed by what we experienced of the Bahá’í approach to worship. The beauty of the Temple’s surroundings, and of the words and music of the service underlined the messages the faith appears to be trying to communicate. Yes, we will probably go back.

Posted by Elisabeth Ritchie at 5:08 PM