Health is for everybody at Royal Pride

Children come first - that makes sense - and so it was with our VSO cluster's health support for Royal Pride. Now it was the turn of parents, or, more accurately, families. It is often difficult to work out what relationship carers may have with children in Uganda. Children's carers can be aunties, uncles, grannies, friends of the family, people next door, older sisters or brothers (not necessarily that much older) – and sometimes they are just mums and dads.

Sunday 23 October was Royal Pride’s Health Day for parents. Sixty parents and carers turned up – not a bad showing for the 200 children in the school – and thousands and thousands of children (well, it just seemed like that!).
VSO volunteers were present in force, including three of the newest – Zoe, Fiona and Catherine. In fact, Catherine took the photos included in this post. The star of the show was undoubtedly Shivaun, a nutritionist working with VSO in central Uganda. She put her heart and soul into talking with parents about how to provide a good diet for their children, using food which they can afford and which is easily available. 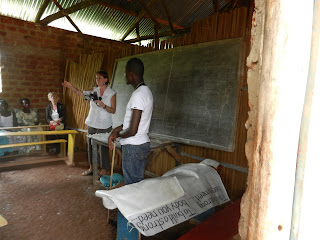 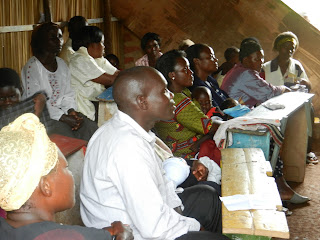 The affordability of food is a serious issue in Uganda just now. In most of the country the problem is not so much the result of poor harvests caused by drought or the destruction of crops by rain and hail storms. That is a problem largely confined to the north and east of the country. Like Great Britain, different parts of Uganda can have quite different climates and weather. Fortunately, in most of the country both are usually good. Hence, the availability of food is not the main issue as far as ordinary people are concerned; it is its cost.  Transport costs have rocketed. There is no rail system worth speaking of in Uganda, the roads are dreadful and all diesel has to be brought in from Kenya. Rising oil price have had a significant effect on the cost of food. As a result, people are going hungry or, in the case of children, eating a very limited diet which does not provide them with the nutrients they need: malnutrition, not famine. Most families in the Mutungo area, where Royal Pride is located, eat only one meal each day. It is very important, therefore, that that precious meal is a balanced and nutritious one.
Uganda’s inflation rate is a whopping 30% - rather different from the 5% inflation which is causing the British much angst just now. However, food inflation is over 50%. Week after week, the costs of staple foods steadily increase. Each month prices can rise by half as much again, or can even double. So, learning how to feed your children well, within a very limited budget, is precious knowledge. That knowledge was what Shivaun was sharing with her listeners.
It wasn’t just chalk and talk either. Shivaun used lots of visual materials, for example. She even took her group outside to play a game, matching photographs of different local foodstuffs to four categories of food that are needed for a balanced diet. The parents really enjoyed the game, probably the first active learning they have experienced in any school they have ever attended! 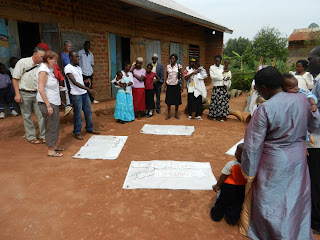 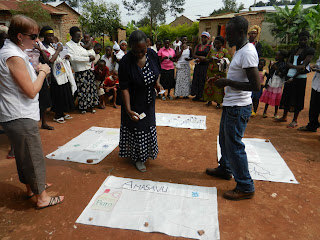 Meanwhile, in another group, Jean used Mango Tree posters* on various health-related topics to complement Shivaun’s work. She covered topics such as how to avoid malaria through using treated mosquito nets and about effective hand washing to avoid other diseases. 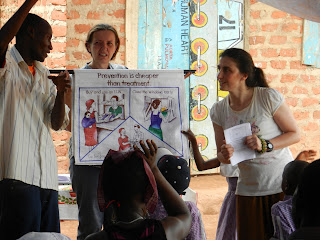 This being Uganda, not everyone arrived for the 2pm start! We had agreed on a 'stations' approach so, as more parents arrived, volunteers, supported by members of the school community acting as interpreters, took turns to talk with groups about the posters. Then we all switched round with Shivaun taking the other half of parents for their turn on healthy eating - you get the picture.
At one stage in the proceedings Jean, Finlay and Stuart did a bit of weighing and measuring of those pupils who had allegedly not participated in that exercise six weeks previously. We say 'allegedly' because Finlay remembered at least three children whom he had encountered last time, notably Victor who obviously enjoys being weighed and measured. 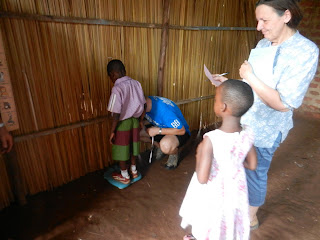 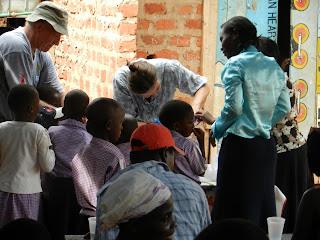 All in all it was a very successful afternoon. Godfrey expressed his grateful thanks and volunteers enjoyed the song of appreciation sung by the choir. We all enjoyed our day and, hopefully, some of the messages will have got through. 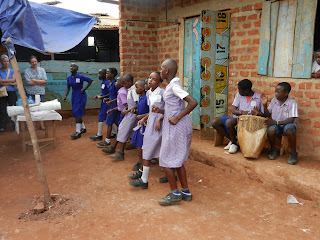 This cluster activity is part of what VSO is about. Like us, all volunteers have their various ‘day jobs’: in education, children’s homes, business development, child protection, publicity and marketing and in health facilities and hospitals. Events like the health day are over and above this work. They give us a chance to share our skills and experience in a different context, and to meet members of the community on a different footing. Above all, though, it is fun!

*  Mango Tree is an innovative educational business which makes teaching and learning resources out of locally available and recycled materials.

By the way, this is a post written collaboratively by Stuart and me (as a number of them are) as I was unwell at the time of the Parents' Day and couldn't go. I wrote the post while recuperating in the UK. Still there at time of writing this note (21/11/2011).

Posted by Elisabeth Ritchie at 7:33 PM