Mount Elgon, its people and traditions

One of the 'perks' of doing our kind of work is that it involves travelling around Uganda and learning about its varied and rich culture and traditions. One of our trips gave us the chance to visit the Sipi Falls on Mount Elgon, not far from the Kenyan border.  Parts of Mount Elgon are disputed territory.  The government has claimed a good bit of the land for a national park, but the local clans, understandably perhaps, feel aggrieved about being moved off their ancestral territory.  However, the land is poor and rocky, and deforestation is leading to major degradation, hastening climate change and resulting in catastrophic landslides. The most recent major landslide, in May 2010, claimed three hundred and fifty lives,while scores of people have died in smaller landslips since then.  Every so often we read in the newspapers about clashes between locals and the army as the former tear down fences and try to re-enter their land.  However, we were not foolhardy enough to visit the really tricky areas (family, please note!).

Where we were, the national park has made an agreement with the clan, part of the Masai people who also live in Kenya and Tanzania. The entrance fees paid by tourists now support local schools and provide health care.

We didn’t have time to visit all four of the falls.  The main Sipi waterfall, however, was dramatic, falling 99 metres down a sheer cliff face.  The rich colours of the water-loving plants and the lush vegetation made this a magical place. 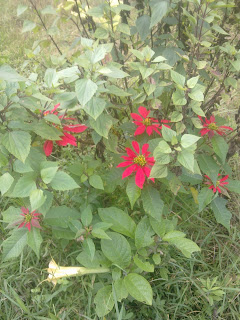 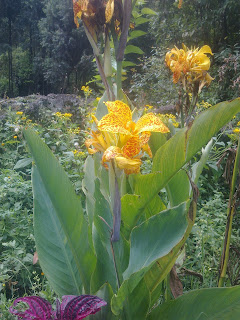 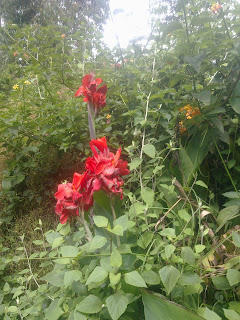 As we drove back from the Falls, we suddenly came across twenty or thirty young men, with a few female supporters, chanting rhythmically as they jogged down the road, brandishing long leafy green branches.  The next day marked their coming of age.   They were undergoing various preparatory rites before being circumcised, when they would be accepted as full clan members.

Young women in eastern Uganda used to undergo a similar coming-of-age ritual: female genital mutilation.  Mutilation was banned this time last year and has never been practised within most of Uganda.  However, the new law remains controversial because Uganda’s constitution also protects the cultural traditions of its various tribes and clans.

In autumn 2010, newspapers reported that 100 Ugandan girls from the Sabiny clan on Mount Elgon had been smuggled out of their villages in the middle of the night, some across to Kenya, in order to undergo the procedure.  A hundred girls, and not one police officer noticed….  During the operation the clitoris is cut out, without the use of any anaesthetic.  Indeed, the girls are not allowed to show pain or cry out.  The same unsterilised knife or razor blade is used on several girls, risking the spread of HIV.  The ‘operation’ is even more dangerous when carried out at night.  The girls suffer major blood loss and unbearable pain.   A few may die immediately, others later on.

Mutilation results in very high levels of death in childbirth, neonatal death and long term physical damage, including fistulas which lead to incontinence and, as a result, exclusion from the community.  Mutilation might be illegal, but people still do it and sometimes young women request it.  Women who have not undergone mutilation are not allowed to enter the communal millet stores, draw water or milk cows, at least alongside other women, and sometimes not at all.  Some of them reach the stage where they can no longer tolerate this ostracism from the life of the family and the clan, and volunteer for the procedure.   One of the saddest things about mutilation is that it is other women who carry it out.

Mount Elgon is a beautiful part of a very beautiful country. Most of us would, I think, want local traditions to continue alongside technological development and improvements in education. However, westerners like us may also sometimes have a rather romantic view of age-old traditions, perhaps because so few of our own remain.  A volunteer we know sometimes says to her students, ‘The fact that something is your culture does not mean that it is good.’

Posted by Elisabeth Ritchie at 1:46 PM