Back to school at Royal Pride and elsewhere

The long holiday is over and the new school year is starting. The last two months have been neither a summer nor a winter holiday for, as you know, Uganda is on the equator. However, it was the dry season and the weather remains hot, rainless and dusty.

Back to school, then, for children across Uganda. Primary schools started the new session this week. Secondary schools will start after the government has selected students and allocated them to government and private schools which operate the Universal Secondary Education (USE) scheme. Traffic jams, queues for ‘taxis’ (minibuses), crowded banks (for school fees) and busy markets bore witness to the mass mobilisation of the middle classes. The prevalence of boarding in Uganda results in long traffic jams along the main Kampala roads (three or four hours sometimes) as children are dropped off with their mattresses, plastic laundry bowls and bedding.

There are other reasons for the slow start to the term of course. Parents may have to work longer to get fees together. They may keep children at home to do domestic and other tasks. The District Education Officer (DEO) in Napak (north) said hundreds of children had not enrolled. Children were pictured filling containers with ‘local brew’ which they were going out to sell. Although inflation is easing a bit, it is still over 25% and families are feeling the pinch. Even in schools offering Universal Primary Education (UPE), the government only pays for teachers’ salaries, buildings and some educational resources like text books. Parents have to buy uniform, exercise books and pens, geometrical instruments, toilet rolls, brooms for cleaning the school and food. Some schools demand more. In Kampala, even in UPE government schools, parents have to pay top-up fees of more than Shs20,000 (£5.50) each term. Stuart and I have seen children all over Kampala who are clearly not going to school. More than a third of Ugandans are below official poverty levels. Daily incomes of Shs2,000 (50p) make it all but impossible to send your children to school. 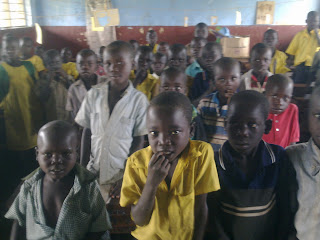 Some children work to provide their own school fees. The Daily Monitor published a story some time ago about a nine-year old in Primary 1 at an Entebbe school who was doing just this. (Age does not correspond to stage in Uganda as many children go to school intermittently, depending on their parents’ ability to pay.)

‘I had lost hope for school after the death of my mother because there was nobody willing to pay my school fees and look after me,’ said the boy.

He is bringing himself up and paying for his scholastic materials by fetching water for people and making soap from leaves. He sells his products to German engineers working on a nearby building project and the director and teachers at his school. 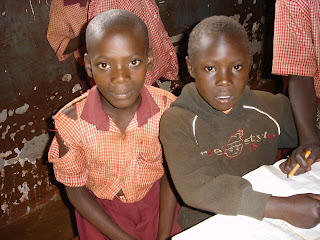 Some children in Uganda no longer have a school to go back to and parents are struggling to find new places. In the Kasese/Hoima area (west), inspectors closed 40 private schools which failed to meet minimum standards. Just as in the UK, private schools are often no better than state schools, and frequently they are worse. Despite that, parents send their children to these schools because they assume that they perform better than UPE government schools. The schools which were closed had no pit-latrines, water sources, kitchens, washing facilities for girls or school grounds for exercise. Many of them were boarding schools. Many employed unqualified teachers who had got no further than S4 or even P7 in their own education. Closing these schools, however, means that 4,000 children do not have school places. In Ntungamo (west) district inspectors have closed more than 90 illegal private schools without licenses from the Ministry of Education and Sports. Some of the schools had been using ‘makeshift structures made of mats and papyrus’. The DEO said the schools had been inspected every three months and warned of the requirements but had not complied. They received letters at the beginning of December directing them not to open for the new school term. As a result 18,200 children have no school place.

Government schools can also have problems in reopening.  Ten primary schools in Nakasongola (central) have failed to open as their pit-latrines have collapsed or are full up. Some latrines were washed away during last year’s floods. The district authorities say they have no money to deal with the situation and pupils must find other schools.

Royal Pride Community Academy has also had problems. In October, floods destroyed the pit-latrines and swamped the wooden classrooms, washing away books and materials. Local inspectors, rightly, told the school that without latrines it could not open. Fortunately, the VSO cluster and supporters in the UK managed to provide the necessary funds. Parents have also constructed some ’dykes’ made of sand bags between the school and the swamp to prevent further flooding. Inspectors also require dividing walls to be built between classes in the large brick building, to reduce noise. The wooden classrooms are not fit for purpose. A kitchen shelter needs to be built, and a proper cooking stove bought. Just a small amount of money will enable the school to connect to the national water supply. All these changes are essential to achieve registration, without which the City Council will close the school down.


You may feel that the inspectors are making a fuss about nothing as the schooling provided by Royal Pride is good, despite its poor facilities. The children are happy and well cared for, and they do well. However, health and safety ARE important. They are critical for children’s protection and to enable them to learn effectively. Ill-nourished children easily succumb to disease.

One issue that is exercising me at the moment and for which I have no solution, is what happens to children once they have left Royal Pride. As you may be aware, the school achieved very good results in the Primary Leaving Examination this year. All thirteen children passed, four of them in Division 1. However, none of these children can afford to go to secondary school. We are already supporting other children and cannot afford to take on any more.

In the past I have always had doubts about sponsorship schemes. I have wondered about the fairness of picking out specific children from their communities to be educated. However, since I have been in Uganda my views have changed. I have seen the difference made to the lives of individual children when a sponsor steps in to pay the fees of those who have had to drop out of school or who haven’t been able to go there in the first place. It is so easy to look at the desperate need across a country like Uganda and say that it is hopeless to try to help. However, if we can save those children whom we can, then that will make a difference, even if we are aware that others remain unsupported. 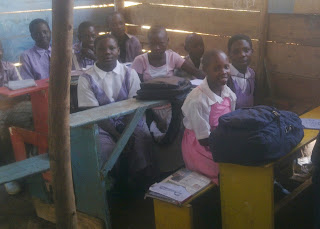 Usually sponsoring a child involves sending them as boarders. Again, this is where my views have changed. I used to think this was terrible, because of separation from family and cultural dislocation. However, I have learnt that children who are sponsored are so desperate for an education that they take such changes in their stride. Boarding guarantees them three meals a day, far more than their families can provide. For the first time in their lives they will get a good night’s sleep in a bed, instead of lying on a mat on a mud floor with all their siblings in a noisy one-roomed house. They will have facilities and time to study, and support from teachers. They will also not have to walk long distances in the dark.

Sponsoring organisations like Lessons for Life (Kampala) and Uganda Schools Trust (western Uganda) ensure that vulnerable children are given uniforms and educational materials. They visit the schools to check on standards and provide children with counselling and support. Through mentoring they encourage children to persist with their education and cope with any personal problems they might have. To sponsor a pupil to board at a government USE secondary school costs about Shs650,000 (£160) per term, everything included.

Uganda is a country of haves and have-nots. Sadly, going back to school is too often just for the lucky ones. 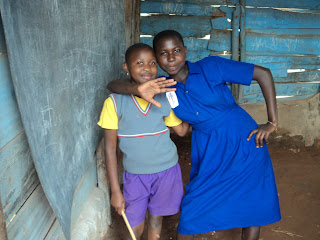 New brooms, a new term and a new year

Posted by Elisabeth Ritchie at 12:40 PM