Is it goodbye to Universal Primary Education in Uganda?

Yesterday Stuart and I were 'shocked and saddened' (as they say) by the news that Universal Primary Education in Uganda may soon no longer be 'universal'. The Ministry of Education and Sports has just proposed that government support be removed from all urban primary schools.

The Ministry has a shortfall in its budget of Shs314 billion (just over £85.5 million). Its solution to this problem is a proposal that government funding be retained for poor rural primary schools but removed from the towns and cities. In the view of the top civil servants who draft such proposals, people living in urban centres are prosperous enough to pay for their children's education. They clearly haven't turned off the main streets of Kampala beyond their pleasant residential areas and wound their way down by the slums of Mutungo to the swamp, or through the squalid housing of Bwaise or Katwe with their open sewers. 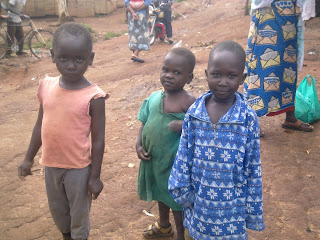 Universal Primary Education (UPE) has always been Uganda's flagship educational policy. Uganda was the first developing nation to introduce universal primary education, well before the Millennium Development Goals (MDGs) and Education for All. UPE was designed in 1997 as a national programme aimed at providing free education to all young Ugandan children. The need for free primary education had been emphasised by the United Nations General Assembly  in 1948. The Universal Declaration of Human Rights states that: “Everyone has the right to education. Education shall be free for at least the elementary and fundamental stage”. 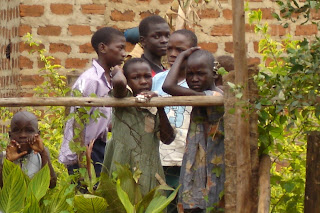 Since 1997, enrolment in primary schools has grown from 70% shortly after UPE was established, to 120% today - a ridiculous figure that can be explained by the frequent dropping out and re-enrolling characteristic of the educational experience of many Ugandan children. In many respects real enrolment of around 92% is a triumph.  However, only about 32% of these children make it to Primary 7 (figures published by UNICEF in its report The State of the World's Children 2011).

And therein lie some of the problems of UPE.  When the doors were opened, primary-aged children flooded in. The government paid the schools their pathetic capitation grant of Shs5000 (£1.36) per child per term (usually); it paid their teachers their pathetic salaries of Shs270,000 (£60) per month (sometimes); and built their ramshackle inadequate classrooms (occasionally). Parents were expected to provide uniform, scholastic materials and food. However, the government did not provide sufficient extra resources to address the needs of all the extra children. The result is that educational standards, including standards of literacy and numeracy, went down. The learning environment never recovered. And many of the parents couldn't even pay for the materials they were supposed to provide.

Then schools started setting additional fees, called 'development' or 'PTA' fees. And of course parents often couldn't pay those either. Children are sometimes, illegally, turned away from schools if they cannot pay these unofficial fees. Yesterday's paper recounted a story of a man in Nwoya, northern Uganda, whose belongings were impounded by the School Management Committee after he was unable to pay additional fees of Shs10,000 (£2.72) for teachers' welfare and Shs1,200 for his child to sit an examination. He ended up torching the grass-thatched school leaving 180 pupils without any classrooms. 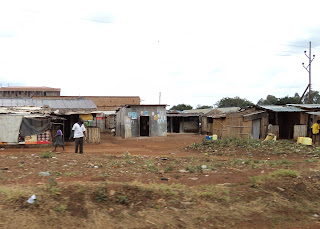 have traditionally sent their children to respected government schools. They now bewail the introduction of UPE as the resultant flood of poor children has 'destroyed' their good primary schools, sending classes of 30 or 40 rocketing up to 70 or 100. Not everywhere, of course. Papers are currently reporting that schools in Karamoja are almost empty this term. Few children returned from the long holiday. Wells are dry and children are tramping miles in search of water. Their parents need them to go out working or searching for food, not sitting in classrooms. However, empty classrooms in north east Karamoja aren't much use to the slum-dwellers of Kampala.

We have been told that some years back, P7 teach­ers were made to sit the same exams as their pupils.  Seven out of 10 failed the exams. Primary teachers are often poorly educated, poorly supported and poorly paid. UPE therefore has had many problems beyond those of inadequate resourcing. 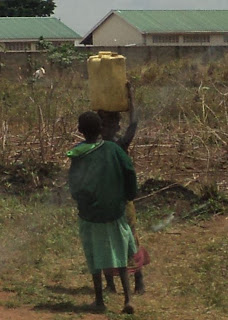 Indeed, it is not just that the funding was never sufficient. Many of the funds that existed were spirited away into the pockets of politicians and civil servants. Ghost schools, ghost teachers and ghost pupils have bedevilled both primary and secondary education. Headteachers connive with district personnel, education civil servants and the Public Service Ministry to milk the system of resources by claiming for the salaries of non-existent teachers and the capitation allowances of non-existent schools and non-existent pupils. The proceeds are then shared among them.

Today's paper states that donors have warned the government that they will withdraw funds if it does not keep to its commitment to spend at least 20% of the national budget on education. In its National Development Plan, Uganda projected that it would spend 17% of its budget on education. This projection has since fallen to 14%. As a result, Uganda stands to lose its Shs240 billion ($100 million) World Bank grant for education.  The country would also become  ineligible to apply for funding from the World Bank's Global Partnership for Education fund: a $100 million grant to help countries meet the MDGs by 2015. The head of Uganda's Education Development Partners, Mr Geopt, said that the current inflation rate of 28% already meant a contraction in budgets in real terms. He added, however, that the government could save Shs25 billion yearly by eliminating ghost schools, pupils and teachers - in our view, certainly enough to educate the urban poor.

In November 2009, the government set up a five-person Commission of Enquiry to investigate corruption of the ghostly kind. The Commission was charged to report within six months on the misappropriation of funds for UPE/USE. Well, two years and a month later, the Commission has still not reported. Members have had a few meetings and at least two extensions to their deadline. Their budget went up from Shs4.3 billion to Shs6.3 billion and they still asked for even more money to carry out their duties. (The whole of Mbarara district only receives Shs400 million for UPE.)

The commissioners have spent Shs7 billion on hotel and restaurant bills and transport but they have held no public hearings and have carried out no field trips. Apparently the Commission spent about Shs10 million every day just on travel within Kampala. Sometimes as much as Shs2 or 4 million was drawn on fuel cards for just one transaction. The five commissioners allegedly spent Shs3.5 million on lunch each month, having submitted a budget for 10 people. One of the commissioners is the substantive but erstwhile director of the also erstwhile Education Standards Agency, in charge of ....(guess what?) standards (and inspection), who was removed from her post because of accusations of irregularities. MP Tumwebaze Frank of Kibaale wondered 'why commissions of inquiry are funded by the agencies they are inquiring into and where there are high chances of compromise'.

An audit of the Commission's account books has revealed 'a number of anomalies'. Even worse, during the audit to check the doubtful expenditure, seven audit assistants were over-paid professional fees totalling Shs37 million.

It now appears that MPs have unanimously voted to put a stop to the enquiry into corruption (perhaps because the Commission was itself corrupt?). They have asked for another investigation to be set up to enquire into the operation of the Commission of Enquiry itself. The President has, however, attacked the Speaker and Parliament for putting a stop to an 'important committee'.

And who suffers from all this endless circularity, waste and in-fighting?

No doubt about that. It is the poor children of Uganda.

According to the Monitor, whereas the President has called the members of the Commission 'freedom fighters', MPs called them 'useless, idle, redundant, sophisticated vampires and money guzzlers.'

However, this still doesn't help the children. The drop-out and failure rates of children in UPE schools are unacceptably high. That is bad enough. Now, most of those living in towns will not be able to afford to go to primary school at all. 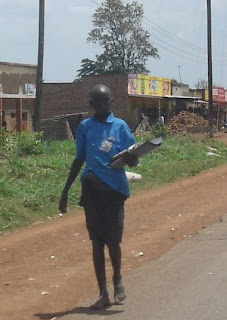 What is the moral of this tale?

There would be no need to remove government grants from poor children in the Kampala slums if the money for their education hadn't been stolen by the rich and powerful, or indeed, by the just comfortably off. Whether it is the kind of corruption recounted in our last post, or the salting away of funds for textbooks, the amount of money deliberately removed from public services in Uganda is a disgrace to this so-called 'Christian' country.


Or, in more modern English, 'For to the one who has, more will be given, and he will have an abundance, but from the one who has not, even what he has will be taken away.'


Unfortunately, in Uganda people tend to take the Bible literally.


Posted by Elisabeth Ritchie at 9:03 PM