Chilling out at Kyaninga

Where better to celebrate one's birthday treat than at Kyaninga Lodge, just outside Fort Portal? (NB, 'Ky' is pronounced 'ch'.)

Just as well, for the five hour journey west from Kampala counts as one the most boring in Uganda. Dusty trading centre after dusty trading centre stretched before and behind us. We were expecting this depressing ribbon development interspersed with papyrus swamp, as we had done the journey before on several occasions. What we were not expecting, however, were the miles and miles of recently hacked down and, indeed, smouldering forest: acres of it. A First World War landscape met our eyes, tree stump after tree stump. The newspapers have been full of stories of 'encroachers' and now we were seeing the evidence with our own eyes. All that tropical forest was being turned into charcoal, emptied into sacks and sold along the side of the road. This was not uncontrolled development by big companies, though Uganda has its fair share of that. No, these were 'little' people, poor landless families desperately scratching a living by burning down other people's trees, and their children's inheritance.

That was a bit of a depressing start to our weekend, we have to admit, but then a few miles before Fort Portal we started seeing the tea plantations and remembered why we liked this place. Of course, these rows of bright green bushes had themselves replaced thick forests of trees in their time, but now they just looked sunny and peaceful. A few Scots had got here a century or so before us - McLeod Russell, Tea Planters, to be exact - and their plantations are still going strong. Then we saw the mountains peeping through the mist and we knew we were nearing our destination.


Fort Portal is probably one of the most attractive towns in Uganda. This is a more significant comment than might at first appear.  Uganda does not 'do' picturesque towns and villages.  Its mountains are magnificent, its lakes sparkle in the sunshine and its savannah stretches for mile after shimmering mile, but its urban centres are dusty, down-at-heel and chaotic. Not so Fort Portal, a douce colonial town nestling at the foot of the Rwenzori Mountains.


The centre of the town stretches between the old fort, now the Toro golf club (see our earlier post Fort Portal, Semliki and Toro Golf Club) and the new Royal Palace, built for the Queen Mother and Tooro's youthful king. (Don't worry about the variations in spelling!) Like other colonial towns (Entebbe and Jinja come to mind), the outskirts contain dilapidated colonial bungalows in spacious, but now bare and dusty, gardens and a few rows of workers' quarters carefully tucked away half out of sight.

Fort Portal has its fair share of NGOs, for the Kabarole, Kibale and Kamwenge areas are quite poor and until ten years or so ago the mountains had seen a good bit of rebel activity. The relatively high proportion of westerners currently living in Fort Portal, however, means that there are a few pleasant places to hang out in and some particularly comfortable - indeed, luxurious - lodges, for well-heeled tourists. In Ugandan terms and when on our weekends, we count as the latter, so after a quick peek at the town, we turned round and headed for Kyaninga Lodge.


One's first sight of the lodge is dramatic: a row of eight thatched log cabins on stilts, perched on the ridge of a crater lake and joined together by wooden walkways joined by lots of steps. You have to be fit to stay in Kyaninga - or else persuade the managers to put you in either cottage four or cottage five, on either side of the restaurant and swimming pool area! All the accommodation has been built of wood - not tropical forest, you will be glad to hear, but eucalyptus and Mount Elgon olive wood. Eucalyptus is the sitka spruce of Uganda. Brought from Australia, its serried rows remind one of Forestry Commission plantations in the Lake District and Scotland. Eucalyptus drains all the water out of the land so the nutrients leach away.  Quite a good idea to use it for building!

The Lodge is one of Uganda's 'eco' lodges, so it uses solar-powered electricity (no hair driers!). The food is wonderful - the best we've had in Uganda (except, perhaps at Mahingo Lodge, which is equally luxurious). Fruit and vegetables are grown in the garden or bought from local farms.  During the building of the Lodge about 130 local workers received specialist training in stone and wood crafts, developing the skills to support themselves and to work for the Lodge's spin-off businesses, like furniture making. So, a good bit of 'trickle down' into the community.

The backdrop of the Mountains of the Moon (Ptolemy's name for the Rwenzoris) is magnificent - when you can see them through the haze. The crater lake itself, more than 200 meters deep, is stunning - and you can swim in it, for, unlike most lakes in Uganda, it does not have bilharzia.

We, however, had our dips in the swimming pool and then lay lazily in the sun as immobile as the various chameleons with whom we shared the decking.


Fort Portal is a bit cooler than eastern Uganda. However, it was quite warm enough for us... and the lizards!

Swimming and sunning was just about the sum total of all the activity Stuart engaged in that weekend, apart from lifting his fork and glass. I, however, true to my Calvinist roots, decided to use my time profitably and went on a couple of walks. There are two walks direct from Kyaninga, one a ridge walk around the crater lake and the other a forest walk at the water's edge. I did the former, with company and a guide.

The long-crested eagles which perch high on the trees apparently lead (not drive...) the local men to drink, or so they say. 'Where is the alcohol?' they ask the eagle and track where it goes. The fact that they have so much success may simply indicate the amount of home-brew hidden in the local bushes. Children, however, call out, 'Long-crested eagle who will I marry?' and watch the direction in which it flies.

We didn't see the black and white colobus who live down by the shore, but we did see pretty little vervet monkeys and could hear the primates calling out to each other in the evening across the forest.

The rim of the lake is cultivated, crops growing well on the volcanic soil. The square patches contained sweet potatoes, 'Irish' potatoes, maize and a lot of cassava. Sadly a whole side of the ridge had been burnt through field clearance fires which spread, a common-enough occurrence in Uganda.

My other walk was through Tooro Botanical Gardens in Fort Portal itself. Founded in 2001 with German support, it grows indigenous trees to replace those so thoughtlessly felled in both the past and the present (as we had seen on our way). It also grows medicinal herbs, which are dried and sold. Plantations of eucalyptus trees burn very easily. The hope is that by regenerating traditional forest eventually the primates and other animals and birds will return.  Eucalyptus is almost impossible to kill, so the gardeners graft on indigenous species which eventually take over and kill their exotic foreign hosts.

The Gardens supports traditional craftsmen who make banana fibre mats. They also act as an educational resource for schools and colleges as well as providing outreach support to local villages. Staff provide advice, for example, on ways of discouraging wild animals from destroying people's crops, for example by planting chilli plants round the perimeters of gardens, or by building elephant trenches (see our post on Kibale). Sadly, part of the Gardens had themselves been burnt - again accidentally when fire spread from nearby field clearance fires.


It was just a gentle walk through the Gardens, however, and I've forgotten the names of all the plants. Remembering was just too much effort.

Our weekend in Kyaninga was a little oasis in the middle of work. We ate, drank and chilled out.  We'll be back! 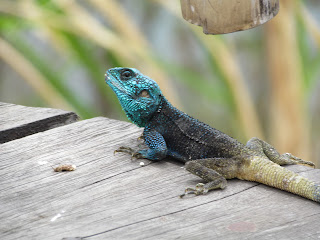 You may also be interested in the following posts about the Fort Portal area.

Living together in Kibale Forest


Posted by Elisabeth Ritchie at 7:36 PM