Kasese is not a particularly attractive town, particularly compared with its pleasant northerly neighbour Fort Portal.  Kasese's setting, however, is pretty impressive. The town huddles on the floor of the Rift Valley, under Mount Stanley, the highest mountain in the western Rwenzori range, its loftiest peak, Margherita, an impressive 5109 metres. Not far south of Kasese a turning to the right off the main road takes you direct to the Congolese border, which is where Stuart ended up (by intention, not accident) when we were inspecting in the area a couple of weeks ago. And yes, he almost did...that is, cross over, for everybody else was doing it and he fancied wandering round the market. Rather disappointingly he thought better of it. 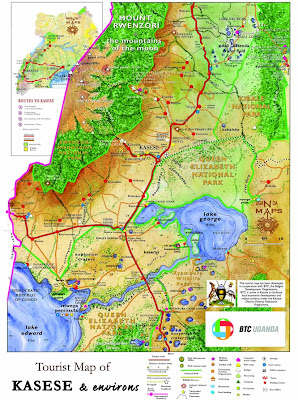 However, we were not intending to deviate from our route on this particular day, for we knew exactly where we were going. The hour-long drive from the north had taken us through the usual shabby trading centres and past the Hima Cement Factory - not a notable tourist attraction but one of the few sources of income in an area where almost two thirds of the population are below the official poverty line.


The further south you go, the more rugged the skyline on your right until, eventually, you reach Kasese's most notable feature: its roundabout. Once at the roundabout, you're almost at your destination. Almost where? Almost at Glorious Preparatory School. British readers please note, the school is not as posh as it sounds! 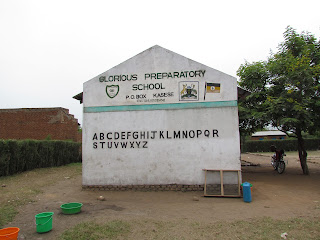 Not an inspection this time: our visit to Glorious was simply for personal interest and enjoyment. 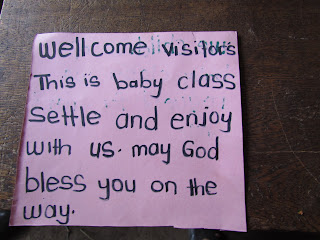 A private nursery/primary school of about 400 pupils, Glorious was founded in 2009, not that long ago. We had heard about the school and what it was trying to do from the Uganda Schools Trust, which is providing it with precious support. 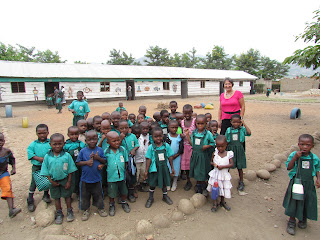 The school serves its immediate local community, an area of self-built mud-brick housing on the site of what was until quite recently a camp for internally displaced people (IDPs).  Kasese and its immediate area was a conflict zone from 1996 until 2001, when the Allied Democratic Front (ADF) engaged in guerilla attacks from the mountains above the town. Remember, the LRA has not been the only rebel group operating in Uganda. There were getting on for a score of them at one time, not least the NRA, which ultimately transformed itself into Uganda's internationally recognised government. The ADF was a splinter group of the NRA, which fought to return to the NRA's original ten-point political plan.

During the ADF conflict, the people from the hills left their homes and came down to the plain for safety. Local people living on the hillsides continue to undertake military training, just in case. The government armed them during the conflict and unsubstantiated rumours circulate about a possible renewal of violence.

Some families have returned to their mountain homes now that peace has returned, but some still remain and it is their children who form the nucleus of the school population. With war and displacement came social problems such as poverty, family breakdown, HIV/AIDs, alcoholism, prostitution and child abuse of different kinds. The children in the area frequently lack access to education and may suffer from poor nutrition and health conditions which affect their ability to learn and progress. The prevalence of HIV/AIDs in Kasese is 8.2%, 2% higher than the national average. Few families have paid employment. Many of the men just creep into the savannah next to their homes, Queen Elizabeth National Park, and cut down trees to sell as firewood or charcoal.

Glorious Preparatory School was founded by Muhindo Ben and his wife Mbambu Jonah, the headteacher, with the support of their wider family. Their intention was to address some of the challenges described above. Ben himself had been orphaned at an early age and is acutely aware of the impact of financial and other hardship on young people. The school has a clear community purpose: to develop skills among young people which will enable them to support themselves and, in time, develop better lives for their own families.
Ben and Jonah hope to extend their project to secondary-aged vocational education in due course. Below is a summary of the project's long-term objectives.
It is still early days at Glorious, however, and at present the school just goes up to Primary 5. It has arrangements for children reaching P6 to transfer to neighbouring schools.

The accommodation is modest: wooden classrooms, for the most part, with an administration block and a few classrooms built of brick, and hence more watertight and permanent. Classrooms have mud floors and the early years classes can have up to 90 children. However, despite the limitations to the accommodation, staff have made good efforts to make their classrooms welcoming places in which to learn. The children are happy and doing well.

The school reminds us very much of Royal Pride in Kampala, with some of the same difficulties. As at Royal Pride, the latrines are a building priority as local inspectors will require adequate sanitation if the school is going to gain registration. We agree that this is an essential project and, fortunately the school is making good progress with the improvements.

UST has helped with other improvements, for instance the water tank and 'talking' walls.


The school does its best to support local families. Although the nursery finishes for the day at lunchtime, a number of children bring something to eat and stay on in the afternoon, the school providing mats for them to sleep on.

One of the encouraging aspects of Glorious is that the headteacher's and teachers' children attend the school, demonstrating a genuine commitment to its values and ethos.

In a country where corporal punishment, despite being illegal, is still the norm in schools and classrooms often display the most forbidding sets of rules, it was a pleasure to come across one of the best behaviour policies we have seen. 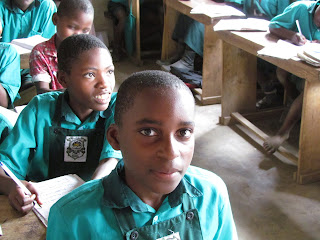 The school's motto is Persist and achieve, straightforward, down to earth and utterly relevant to these children's lives. Determination, resilience and aspiration: these are the qualities which children in Kasese need.

After our visit, Ben took us up the mountain to Kilembe, a trip which gave us much more of a sense of the rural community living just a mile or two up the road from the industrial town. The landscape looked so familiar, we felt we were in Scotland again!

The Kilembe area once had copper mines, closed during the Amin era as the manager was 'not indigenous': a good example of unemployment and poverty being caused by prejudice. The old industrial housing climbs up the hillside, managers' bungalows at the bottom and casual labourers' one-roomed cottages at the top, all now lived in by anyone. However, there is talk that the mines may be reopened. That may spell a more positive future for employment in the area.

The Kilembe mines even have a golf course, so we are told. Unfortunately we came without the golf clubs.

Let's hope that through industrial investment and recovery and projects like the one at Glorious Preparatory School the Kasese community will regain its resilience and hope. The bright faces and happy smiles of the children certainly gave us confidence that it would and left us feeling quite optimistic about the future. 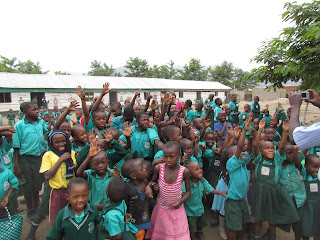 If you would like to learn more about Glorious Preparatory School and what it is trying to achieve, visit the Uganda Schools Trust site where you will find a whole section devoted to the school.

Posted by Elisabeth Ritchie at 7:04 PM