For one reason or another, we've been spending quite a long time in western Uganda over the last few weeks. This has not been a trial. On the contrary, it has been a delight, for western Uganda is a stunningly beautiful part of a very beautiful country. In between various work-related activities, and trips around the local area purely for pleasure, we were fortunate to be able to fit in some personal visits to schools. These are schools with which we or our friends have some sort of a connection. Kyebambe Girls' Secondary School in Fort Portal is one of those schools and has received, and continues to receive, considerable support from the Uganda Schools Trust (UST), a small charity in the north-east of Scotland. 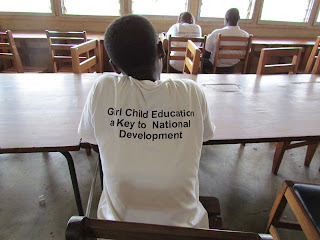 If you've read this blog before, you will know that improving the achievements of girls is a key educational priority in Uganda. Too many girls leave primary school before sitting their Primary Leaving Examination (PLE), most being illegally married off in the final years of primary school. If girls are lucky enough to get into secondary school, they usually perform more poorly than boys, unlike their counterparts in the UK. Educating girls is key to improving the education and health of families, increasing access and equality and developing the nation as a whole. So to be able to write a good news story about girls' education is a pleasure indeed.

Kyebambe is a government-aided school for 800 or so girls, all of whom are boarders. The school is well known not just in Fort Portal but also across the whole of Uganda. Over the last hundred years the school has had a significant impact on education in the Kabarole area.  You will find Fort Portal at the far left of this map, not far from the border with DR Congo.

When we British think of a 'boarding school' we immediately assume that such a school serves only the well-heeled and privileged. Not so in Uganda. Many schools, both primary and secondary, are boarding establishments. Boarding enables young people from remote rural areas to gain access to education. It also reduces the risk of sexual harassment for girls who may have to walk several kilometres a day in the half light or, indeed, the dark. In fact, it is not at all uncommon to see young people walking home from school along pitch black and pot-holed country roads. Boarding also guarantees young people an adequate diet and proper beds where they can get a good night's rest: rare enough experiences for large numbers of children of both sexes in Uganda but significant factors in ensuring educational success for girls. In the photo below you can see new A level students and their parents gathering in front of the administration block with their mattresses, bedding, wash bowls and other necessaries. 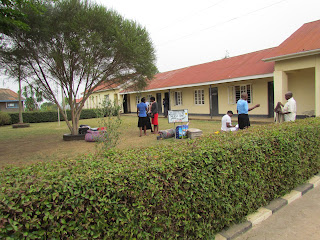 Although Kyebambe is government-aided, it does not provide 'free' education under the Universal Secondary Education (USE) scheme. Nevertheless, it is not a school for wealthy students. Its fees are quite low - 350,000 shillings or so per term (about £100). The elite schools can charge about a million shillings, some far more than this. Many of Kyebambe's pupils are in fact from very poor homes. 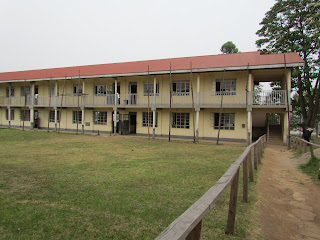 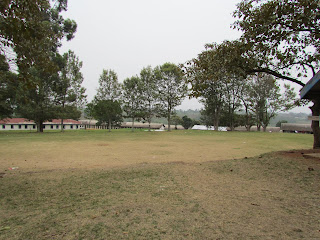 Classes are also much the same size as in other non-USE secondary schools elsewhere in Uganda: about 60 pupils in each. The picture below is of a sixth year A level class. 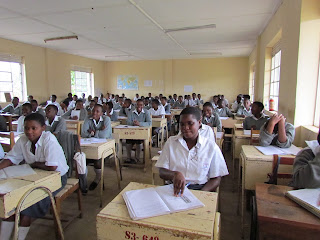 In Uganda, the government target is for one textbook for every three pupils. This is very difficult for many schools to achieve and it is common for the ratio to be far higher. Kyebambe is no exception.

One of the main difficulties schools like Kyebambe face is the lack of specialised classrooms such as science laboratories, let alone the IT suites which British schools take for granted. In the photo below you can see the science block in the centre, glimpsed through the trees at the front of the school. UST has contributed to improvements to the lab facilities and established a link with the science departments at Banchory Academy, an Aberdeenshire secondary school, which has helped to provide a range of resources. 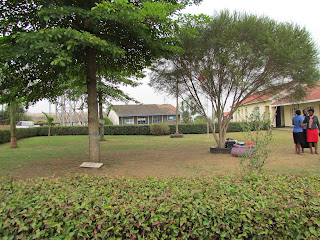 One very positive development over the last year has been the development of an ICT suite. The Ugandan government has chosen Kyebambe to be one of the pilot schools for digital teaching and learning in science and mathematics. While the Ministry of Education and Sports has provided staff training and software packages, the school itself has had to provide its own hardware, including computers, screens and projectors. UST's support in helping the school to develop the ICT facilities has been invaluable. The photos below were taken before all the computers were fully operational. 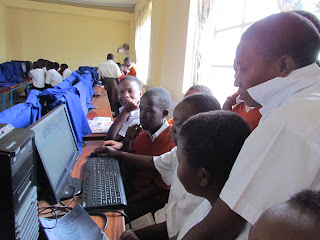 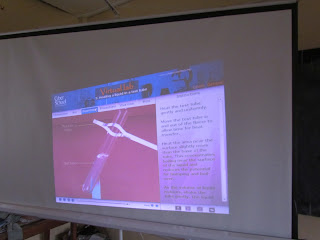 Not before time, the government is also planning to rebuild classrooms damaged by an earthquake in 1994 and subsequently condemned (see below). Fort Portal is in Uganda's western Rift Valley where earthquakes are not uncommon due to shifting tectonic plates. 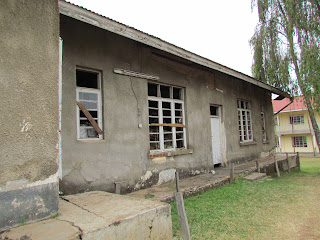 Kyebambe's examination results have improved significantly over the last couple of years, success which Joyce, the Director of Studies (below), puts down to the support the school has received from UST. In fact, one of Kyebambe's students, a girl sponsored by UST, received the best A level results in the whole of Uganda. 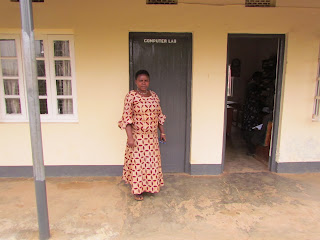 Kyebambe has one of the best equipped libraries we have seen since we have been in Uganda, very largely thanks to donations of books by Banchory Academy and UST. 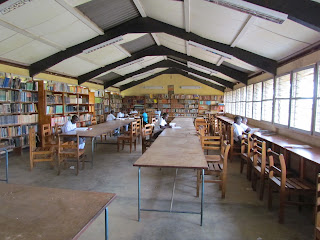 Friends of UST sponsor fifteen girls at Kyebambe, all of whom come from very poor backgrounds. We spoke to one sponsored student, who is now chair of the School Council. She told us what a relief it was to be able to concentrate on her studies instead of having to continually worry about whether her parents would be able to pay her school fees.

Recently UST arranged for Balinda Richardson, Kyebambe's deputy headteacher, to make a study visit to Banchory Academy. Such experiences can be illuminating for Ugandan teachers, who rarely have the opportunity to see education in unfamiliar contexts. They are also, of course, equally illuminating for the Scottish teachers they meet who may know little of the challenges faced by teachers and students in developing countries.

I asked Joyce what difference it made that Kyebambe was a girls' school. She was quite adamant that it made all the difference. In addition to the kinds of risks I have already noted, she felt strongly that girls needed to concentrate on their studies away from boys and also away from families which demanded they carry out time-consuming domestic tasks. Sad to say, many men in Uganda have a predatory approach to relationships with underage girls and schools often find it difficult to protect their female students. In Uganda, male students may sometimes prey on their female peers, while older 'sugar daddies' are a well-known risk to young women. Kyebambe aims to protect them from all such risks and enable them to reach their potential. 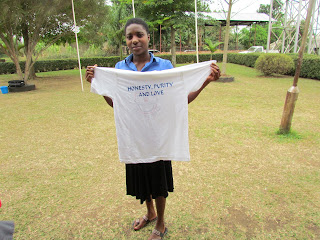 These sentiments may sound as old-fashioned as the school motto on the PE kit above. In Scotland, we expect adolescent girls to have the confidence to stand up for themselves and make their own choices. Girls in Uganda, on the contrary, are expected to be submissive and obedient. This makes it very difficult for them to resist pressure from their families, from society and, particularly, from men.

The young women at Kyebambe are fortunate in being able to develop their confidence and self-esteem away from the distractions of their swaggering and often overbearing male counterparts. As a result, they flourish in both academic and personal terms. It is through their success and the success of other girls like them that Ugandan society itself will be transformed.


If you are interested in learning more about the work of the Uganda Schools Trust, please visit their website.

You may also be interested in the following posts about secondary education in Uganda.

Young, female and the world at their feet...well, perhaps

Life of a secondary school student: exams, fees and a whole lot more

The following video is about the work of UNICEF in supporting girls' education.

Posted by Elisabeth Ritchie at 2:22 PM