First, let me make it clear that we have not seen the notorious Kony video in its entirety. Like most people in Uganda with access to ICT (14% of the population), we use mobile internet, relying on my hopeless MTN modem and Stuart's rather better Orange one. As a result, we cannot afford to download videos of any length. Not just that but the stop/start experience is so frustrating that we usually don't try at all.  A 30 minute video is a no no. Nevertheless, we have seen a good bit of the film as transmitted by various media, including a long extract on NTV.

What do we think? Firstly, the film is certainly a superb example of media production, marketing and distribution. The images, their sequencing and design and the pace of the whole production are impressive. The speed with which the material circulated throughout the world is also amazing.

But what do we think of the content? This is very tricky territory and we can only answer tentatively from our own sheltered expatriate perspective. We cannot and would not dare to answer from the perspective of Ugandans, particularly those from the north, although we can give you a taste of what the Kampala-based English language newspapers are saying.

At one time, the insurgency by the Lord's Resistance Army (LRA) extended across about a third of the country (see coloured areas on the map below). However, there have been no rebel attacks in northern Uganda since 2006, despite the lack of a formal peace agreement. Under the amnesty as many as 13,000 rebel soldiers, many abducted as children, have been processed and returned to their homes. So, despite the line taken by the film, the conflict itself is not a live issue in Uganda just now; however, the aftermath and recovery are. 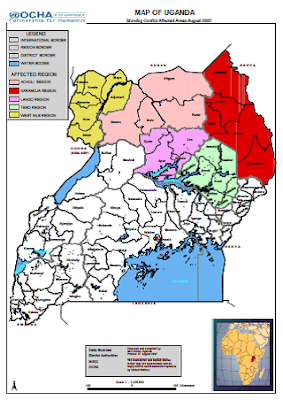 We have seen with our own eyes the reconstruction going on in northern Uganda. Homes are being rebuilt and skills and livelihoods developed. During the insurgency, as many as 1.6 million people were internal refugees, herded into camps for Internally Displaced People (IDPs). The film omits reference to the many atrocities committed by the Uganda People's Defence Force (UPDF) who treated any people found outside the camps as rebels. Most IDPs have now left the camps, although, for various reasons, not necessarily returned to their home villages. We have written about these issues and events in other posts (see below) and don't want to go over the same ground here.

So, despite the impression given by the video, northern Uganda is certainly no longer engaged in its twenty-year-long civil war. If viewers end up thinking otherwise, then that is unfortunate. The emphasis now is on reconstruction. The government has a Peace, Recovery and Development Plan within which international donors and non-governmental organisations (NGOs) plan and deliver their work, providing active support for reconstruction. VSO, for example, is winding up many of its projects in other areas of the country such as western Uganda to focus on northern Uganda, and has opened an office in Gulu. Relatively few of us remain in Kampala.

Devastated lives, however, cannot be restored as easily as devastated buildings. We are talking here of a traumatised population who cannot forget the past. At least 66,000 people from Acholiland alone were abducted by the LRA. Families have been torn apart and some are still hoping and waiting for their children to come home. Returned 'wives' of rebel commanders who were abducted as children have their own children to bring up. In Uganda, the war may have ceased in actual terms but it is still real in people's hearts, memories and current lives.

Settling back into the community is not easy when you have fought with the rebels for ten years or more and have scores of deaths on your conscience. However, many are doing this as well as they can, with the help of a range of organisations, for example, the young man we heard about a couple of days ago who has just qualified as a teacher despite having killed thirty or more people. One of the difficulties is that in real life, unlike in the video, there is often no clear moral distinction between perpetrators and victims, or between the 'bad guys' and the 'good guys'. At what stage or age does an abducted child soldier make a 'choice' to rape, mutilate and kill through his or her own will rather than by being forced?  At what stage does giving up trying to escape indicate that you are now committed to violence and have become morally culpable? Bombing adult fighters in LRA camps means bombing abductees. (See A moral and legal conundrum: justice for northern Uganda)

As the film reiterates, Kony is not dead. Indeed, we understand he even periodically revisits his old haunts in northern Uganda, no one daring to alert the authorities. The war with its mutilations, rape and killings may have moved to DR Congo (DRC) and the Central African Republic (CAR), but the need to capture the LRA leaders (not just Kony) remains. The now much depleted rebel force (200-250 fighters according to Admiral Losey, the US Africa Commander Special Operations Command, in February 26th's Sunday Monitor) is still having a devastating effect on rural communities in DRC and CAR. Uganda has been searching for Kony for many years and is now to lead the force of 5,000 African Union troops. A hundred American soldiers are already here as advisers. The video claims its aim is to drum up support for foreign military intervention, presumably to revitalise the ongoing military operation by African forces. One doubts whether sending US troops to fight their way through the dense tropical rainforest of Congo would be any more successful than sending them to similar territory in Vietnam.

Still, to be fair to Invisible Children, the LRA has not received much attention from the western media despite the staggering casualty rate in Uganda and South Sudan, and now central Africa. However, neither has the conflict been completely ignored. For example, just off the top of my head I can recall an article in the Church of Scotland's Life and Work, a British television programme on rehabilitating returned child soldiers and returning them to their communities and various publicity articles by the major charities, all several years ago. War Child's work in Uganda is well known, far better known than that of the relatively obscure organisation Invisible Children. Nevertheless, you could argue that the film-maker is providing overdue publicity about one of the nastiest wars in modern history, using modern media methods and reaching a new, broader and younger audience .

The views expressed in the Ugandan media vary considerably. Some people think that it can only be helpful for the world at large to know about what has been going on here in east Africa. Yesterday's Monitor, however, accused the film of stereotyping Africa and projecting a 'patronising White Western obsession with fashionable, feel good social causes and human rights crusading'. There certainly does seem to be some naivety in reactions to the film, as if no one had realised before that guerilla warfare is always cruel, vicious and undiscriminating.

So, what do Stuart and I think? We are certainly pleased that Invisible Children is going to release another film to deal with some of the over-simplification, imbalance and factual inaccuracy. We also think it is important for people across the world to be more aware of this nasty little conflict, and others like it. Nevertheless, there is something rather distasteful about the slickness, sensationalism and superficiality of the production itself.

Perhaps we are just getting old. The medium should, after all, be appropriate to the message and to the audience. The media-savvy young people of today may need something a bit more sophisticated and appealing than worthy articles in charity newsletters.

Sorry, that is all we can say to you, given our distance from the issues. Read and watch as much as you can and make up your own minds!


A selection of news articles about the film:

A moral and legal conundrum: justice for northern Uganda

Posted by Elisabeth Ritchie at 4:39 PM