Helping communities to improve their schools: a photographic account of Link's work

School improvement planning isn't the most scintillating issue in Scottish education, important though it may be. The schools get on with it pretty effectively and it works well most of the time. Planning has been responsible for very significant improvements in the quality of Scottish schools over the years (despite what the tabloids say), but it still isn't exactly a riveting subject. We all just take it for granted.

School improvement planning in Uganda is quite different. Actually, the words 'school improvement planning' are a multiple oxymoron. Most of the time, sadly, schools just don't improve and they certainly don't plan. In fact, over the last few years, for all sorts of reasons, educational standards have been declining - and not slowly, either. 'Plummeting' would be a better word, and not just since we arrived. Those of us working in the field feel rather like the little Dutch boy with his finger in the dyke. (Apologies for the mixed metaphors.)

However, fortunately, in corners of Uganda a quiet revolution is happening. Through the work of Link Community Development, one of the organisations which is supporting our work here, ordinary people in rural villages are taking a good hard look at their primary schools and demanding change. School performance review, which sounds just as dull as its close relative school improvement planning, is coming alive.

A couple of weeks ago, Stuart and I had the pleasure of accompanying our Gambian colleagues (Lynn, VSO volunteer, Tawsu, Ministry official, and Matarr, headteacher) around the west of the country, dipping into different stages of Link's school improvement processes. And what makes Link's work so special? It is the fact that it encourages genuine community involvement in planning.

We started off in the Kamwenge area, observing community participation in a couple of rural primary schools.  The school I went to with Matarr, Fred and Edith (Link officers) was similar to many we had seen before; nothing special here. Some lessons took place out of doors, as there weren't enough classrooms, but the latrines were quite new (thanks to an NGO), the accommodation was quite sound (thanks to another NGO) and there was a nice new water-harvesting system (and yes, there was a third one!).

As always the children were a delight.

The school Stuart and Lynn went to with Peter (Link programme director in Kamwenge/Kyenjojo), however, was at the more dilapidated end of the spectrum of Uganda's dilapidated schools. No NGOs seemed to have made it up the hill and improving its accommodation clearly wasn't at the top of the government's list of priorities.

In some of the mud and pole classrooms, the mud had completely washed away. If you look closely you may see the shadowy forms of children in the classroom below. 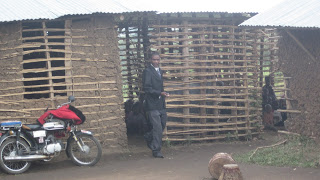 Ah, here they are.
Nevertheless, oblivious to their own condition - for no one had told them they were disadvantaged - the children sang their hearts out. And the community rallied around the school to provide refreshments.


Despite the physical conditions in which they were operating, in both these schools the school appraisal meetings, as they are called, went very smoothly, despite the raising of a number of challenging topics, in one school at least.

Link's role is to mentor and support, so meetings were chaired by local people.

And just what did the community have to say?

No holds were barred. In the session Matarr and I were in, the parents pointed out the school's low performance, ascribing it to poor teaching and teachers' poor attendance. They also said the headteacher was never in school.

A community member asserted that one of the problems was the number of teachers defiling (raping) the girls. At this a titter went round the young male staff body; smirking was the order of the day. (We found out later that three teachers had been arrested for defilement during the previous session. Well, at least they had been arrested, which makes a change.)

The vociferous male pupil (above) defended the teachers' classroom practice despite the mediocre Primary Leaving Examination (PLE) results. He said they were good teachers but the problem for pupils was that unlike the teachers in neighbouring schools, they did not allow their pupils to cheat in the PLE. (Clearly ethical standards apply in some areas but not others.)

The headteacher came up with a number of limp excuses for the pitifully low rate of retention to P7 which at first sight made the inadequate PLE results look almost acceptable. The chair of the local council (LC3) said the problem was poor pupil attendance and child labour. The staff told the LC3 that it wasn't just their fault that pupils' attendance was so low. If he had seen the boys down at the shore getting ready to go fishing, then he should have 'arrested' them.

Well, despite the trenchant arguments, no one lost their temper and no one was lynched. Edith and Fred made quiet, sensible suggestions. At the end of a couple of hours, the community had agreed on the school's strengths and areas for improvement, using their own knowledge and the results of the external evaluation. They had also identified the key priorities for the improvement plan. Then Link left them to it. It was their plan, not Link's. Link would come back later to see how they were getting on with implementing it.

The next day, we set off for Kyenjojo to see some of the other stages in the school improvement process. We had a stunning early morning journey through Kibale Forest, past troops of baboons - about fifty in all, none of them prepared to pose for photographs.

We passed tea pickers in the early morning mist, silhouetted against the hills.


We stopped by a peaceful crater lake. 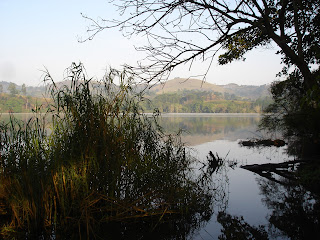 And caught quick glimpses of the Rwenzori foothills in between the trees. 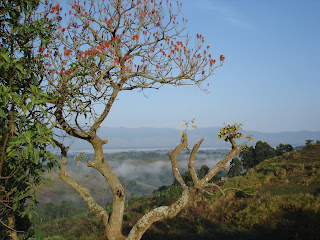 We arrived at Kyenjojo in time to pop into a Link training session for external evaluators.

Then it was time to go off to a couple of schools to see if school improvement planning was actually making a difference. The school which Tawsu and I visited with Godfrey, the Link officer, had had to reduce the number of classes (and increase class size) when storms blew down some of its buildings, so life hadn't been easy since Link's last visit. The school had about 850 pupils, an average size for a Ugandan primary school.

The school had chosen the following (summarised) priorities for its improvement plan during the previous year's performance review:
The purpose of Godfrey's visit was to see what progress the school had made in implementing its plan. The school had certainly taken some action. It was too early as yet to establish any impact but Godfrey was rigorous in demanding evidence of any steps taken. Most of the action involved the community in some way.

Parents were contributing Shs 5,000 each (about £1.50, a couple of days' wages in a poor community) towards the staff house. The purpose of providing a house is so that teachers do not have as far to travel and hence are more likely to attend punctually and regularly. In Uganda, at any one time there is on average a 50% absence rate among teachers across the country. The foundations had been built but unfortunately in the meantime the staff kitchen had been destroyed by storms and had had to be replaced so work had stopped and funds diverted. Godfrey was not that impressed.

In order to raise attainment, parents were sending their P5/P6 children for extra study morning and afternoon and contributing to the costs of extra exams at the end of the month and end of term. That is the Ugandan way, I'm afraid. Oh, and they were giving the teachers a 'soda' for their trouble. Staff were organising more games and sports to sustain pupils' interest. The school really wanted two more teachers so they had asked parents for an extra Shs 1,000 (40p) per term. They had taken on one extra teacher but were wisely waiting to see if parents stumped up the money before taking on another.

The community had rallied around the school in other ways. More parents were now providing packed food for their children to improve concentration, attendance and retention. One interesting method the school was using to encourage parental support was to provide land for a parents' garden. Parents could use the produce to provide lunch for their children. They were also encouraged to visit classes while they were on school grounds, and sit under the trees to discuss any concerns with staff.

The school's senior woman had started up a GEM Club (Girls' Educational Movement) which trained girls in income generation through gardening and craft work. She was visiting homes to bring girls whose domestic tasks prevented them from attending, back to school and had been successful in readmitting five girls so far. The school was also now providing girls with access to sanitary pads, spare knickers and dresses and giving advice on bathing (and a place to do so). Girls often stay off school when they are menstruating because they don't have sanitary protection and the boys bully them.  Improving the attendance of girls would reduce drop out and raise attainment overall.

On the whole, Godfrey was pretty satisfied with the progress the school had made. The headteacher was very appreciative of Link's support. We were certainly interested to see how external intervention from an NGO like Link had been successful in harnessing the energy and support of the whole school community, staff as well as parents, and had invigorated the headteacher.

So, all in all, a fascinating visit for all of us. Back to The Gambia for our friends, to mull over what they had seen. Back to the office for us to write reports and attend meetings. However, none of us will forget any of what we experienced. In particular, we will never forget the children. After all, they are what it was all for.

Posted by Elisabeth Ritchie at 4:27 PM