It's a long way from Monymusk: welcoming the Global Teachers to Masindi

It was wonderful to be surrounded by the unmistakeable vowels and consonants of the Doric last week. Stuart and I were in Masindi, north-western Uganda, to meet Link's Global Teachers who had come all the way from Aberdeenshire in Scotland. We were sharing some of our experiences with them as they prepared to go off to spend five weeks attached to local schools and living with local families. 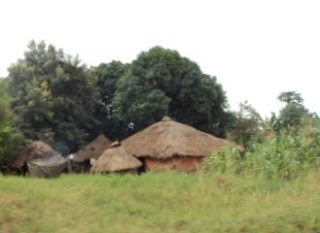 The Masindi area is agricultural - like Aberdeenshire. Well, not exactly like, I meant they are both farming areas. However, where Aberdeenshire grows potatoes and its rolling heather-clad hills are dotted with sheep, Masindi grows tobacco, sugar cane and maize on its flat wooded land. Long-horned cattle and pretty little goats wander beside its rutted red roads. One major difference. Aberdeenshire is prosperous. Masindi is not prosperous. Actually, Masindi is quite poor. Its trading centres are a bit shabbier than Aberdeenshire's solid granite market towns. 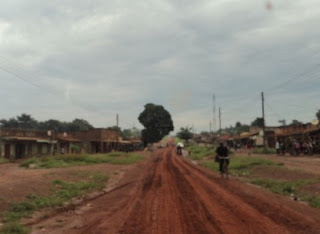 The rainy season's thunder and lightning is rather more dramatic than Aberdeenshire's mist and drizzle, but the downpours and sunshine make the crops grow. 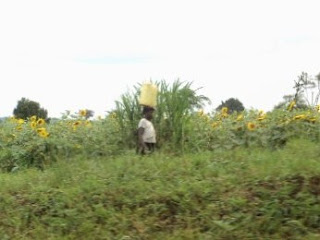 After a gruelling journey with all the usual hazards of missing luggage and missed connections, the teachers arrived safely in Masindi for their orientation before going off to their villages. 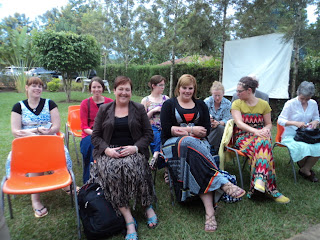 Before they'd even unpacked, they were occupying rows of chairs in the grounds of the Kabalega Resort Hotel, ready for a welcome from the local district. Ugandan children are superb at this sort of thing. A week to prepare, and this is what Walyoba Primary School came up with.

First the familiar cadences of 'Welcome to our visitors...' 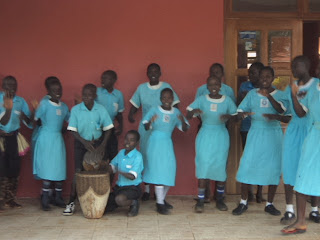 Then the obligatory bottom-wiggling dance, to the sound of the rhythmic rattles attached to the boys' legs.. 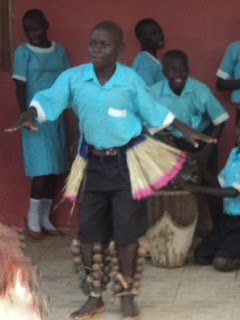 The centrepiece was an interpretation of the traditional introduction (engagement) ceremony. Some of the girls could well be doing it for real the following year. 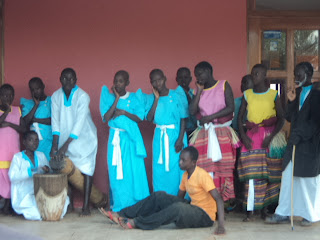 The unfortunate young man sitting on the ground needs a wife. Now who is going to help him? The local women put their heads together while his father, dressed in his kanzo, looks on and ponders the problem. 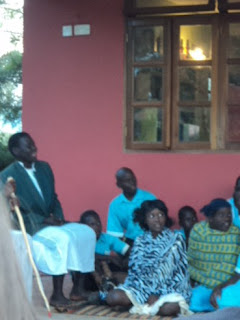 Fortunately, a suitable and beautiful bride is found very quickly. There she is sitting on the mat in her pretty white dress and blue shawl, while her jovial father on the left  rejoices in the prospect of handing her over and getting lots and lots of presents in exchange. Here comes the bride price carried in by the bride's family: bowls of rice, salt and sugar, household furniture and even a goat (you can't see it, but believe me, it is there). 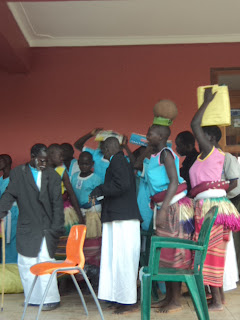 The fathers agree on a suitable price and join in the celebrations. 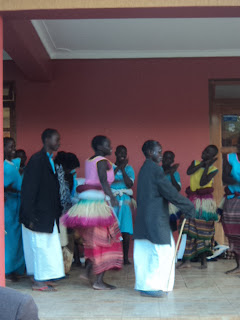 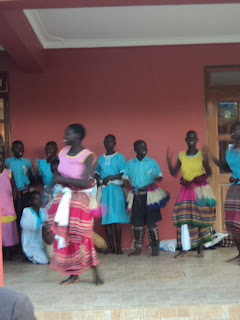 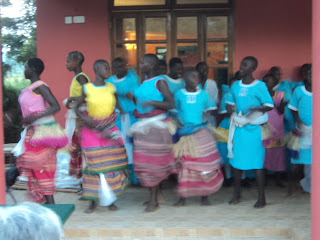 A bit blurry, for it was very twirly. 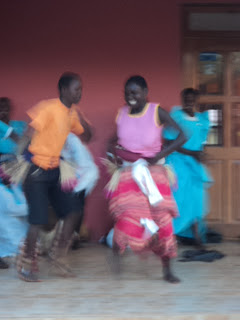 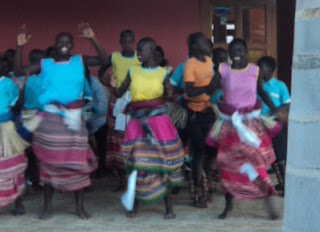 And then it was time to go, for the sun sets early here on the equator. 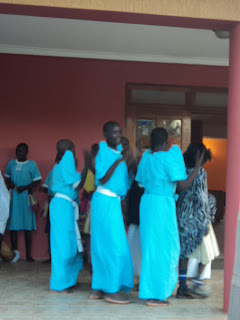 It was back to the familiar Powerpoint the next day, but Uganda being Uganda you still can't take part in a CPD session without getting out of your seat and engaging in a little song and dance, though we were all rather restrained and Scottish compared with our primary school entertainers. 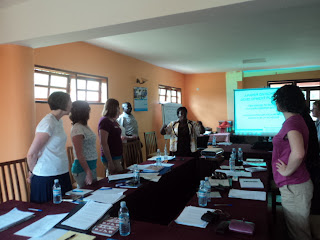 And that was it. The next day it was off and away, each teacher in a different direction to a different school. It will be a wonderful experience, but it certainly won't be like Monymusk. 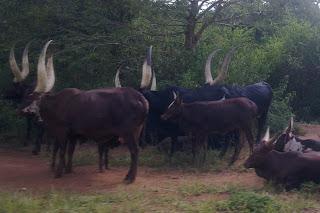 PS. The schools the teachers will be going to will be very like the ones we described in a post shortly after we arrived nearly two years ago: Visiting schools in north-western Uganda.

Posted by Elisabeth Ritchie at 6:42 PM