In the midst of the furore about national under-performance and declining literacy rates, it was good to get out of Kampala and visit a rural school near Masindi - a personal visit, not part of our work. Not that there's anything particularly wonderful about rural schools in general, any more than there is in Scotland (in fact, in Uganda, usually the opposite). However, at St Paul's Primary School they were trying hard. 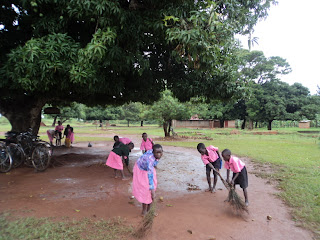 We arrived first thing. Bikes were parked under the mango tree and muddy-footed children were sweeping the compound. It was the turn of Primary 4. It's all set out in the work plan. 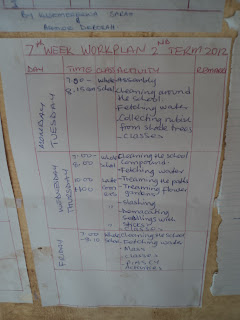 The school building was absolutely standard: long low rows of classrooms, each with a door opening onto the compound. The building, erected by the government, was quite recent, 2007, and in good condition. You may be able to make out the raised foundation which keeps the building above the flood water in the rainy season, again typical of all schools in Uganda. 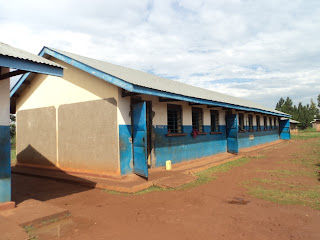 Outside the headteacher's office, attendance figures from the previous day were displayed for the community to see: up-to-date, for a change. It looks to me as if they've got a problem at the middle stages. Mind you, would anyone in Primary 5 notice that 56 out of the 134 children in the class are missing? No one misses school if they can help it at P6/P7, however. Those are the years of leading up to the Primary Leaving Examination (PLE). Classes are smaller, particularly in P7, but not because of poor attendance. The children in P7 are the survivors of an arid curriculum and a dry-as-dust examination system designed to weed children out. As you can see, the drop-out rate is about 50% P1 to P7. An interesting bulge at the middle stages, though. 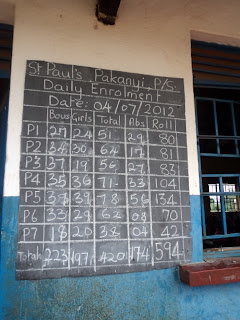 However, it was rain and mud which kept the children away the day we were there. Instead of the 594 children on the roll, only about 200 or so had turned up, and who can blame them. It's not much fun trudging through sticky red mud in your bare feet. By the time we had arrived at the school, the ground was almost dry, but believe you me, it had been a very muddy journey.

St Paul's is a well-organised school by Ugandan standards. We are used to heaps of tattered books and yellowing dog-eared posters.  Here, however, the books were in good order and looked as if they were being used, for a change. 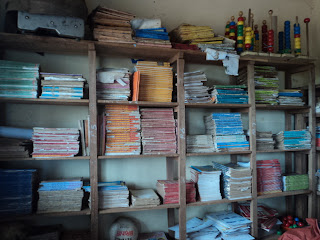 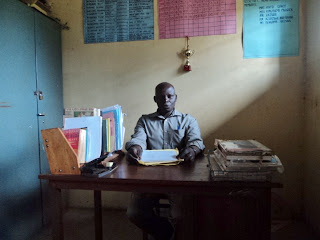 The PLE results haven't been much to write home about: hardly anyone gaining Division 1, though there were a good number in Division 2. The girls were doing pretty well compared with the boys, however, rather surprisingly. Nevertheless, Mr Lusiba's got his work cut out, as he knows. Lots of children work in the tobacco fields when it's time to plant or pick, and child labour cuts right across any efforts to improve attainment. 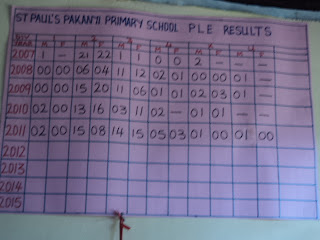 Mr Lubasi said he had been doing a lot of work with the staff to ensure they came to school and taught all their lessons, major issues in Uganda. He felt he had made progress and that the teachers who were still with him were working well. Ugandan schools are required to display a list of staff and their duties, so parents can check to see if they're doing what they should. Interestingly, this was the first time we had seen the heading 'computer number' beside teachers' names. Almost certainly this is because of Link Community Development (LCD), the organisation which brought us out here. LCD does work on school and district governance and community involvement. It is currently introducing computerised approaches to district administration, using solar power. 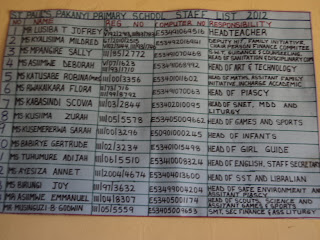 The headteacher had also been working hard to bring parents on board. The issues were the usual ones: poor attendance and hungry children. He was delighted that the parents had not only come to his meetings but were also promising to help complete the new building. Whether they actually do so remains to be seen. 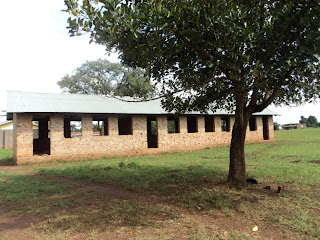 The new building had walls and a roof, but not much else. In particular, it needed a floor: beaten mud or, if lucky, concrete. The parents may not necessarily make financial contributions but some of them might do some of the work.

When we asked about improvement planning, the headteacher produced a clear well-structured plan. It was great to come across a school which had prioritised improvements to teaching and learning. The other priorities were improving sanitation, improving the compound and completing the new building. The school also wanted to make repairs to Primary 7's chalkboard. When we asked about the plan the headteacher told us that he had received support from LCD and was using LCD's template.

We particularly wanted to see some use of practical materials in early years maths classes. In Uganda, almost all of the learning is theoretical and paper-based. One of our VSO colleagues has been working with teachers at the school for the last few months, trying to introduce more active approaches to learning. It has been a long hard struggle, but his efforts appeared to be bearing fruit.

Primary 2 were using a mixture of drinking straws and wooden sticks, which they had brought in from home, for counting. 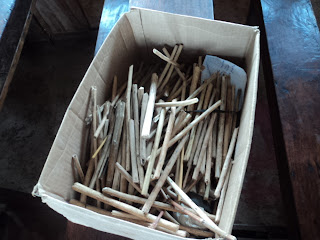 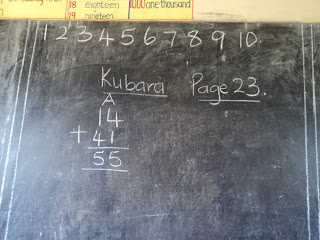 The children were intent on their work, while the two teachers made the rounds helping out. Two thirds of the class were absent due to the rain, so they were getting plenty of attention. Most large classes in Ugandan schools have two teachers. We usually see one resting while the other works, so it was good to see them working together here to help children learn. 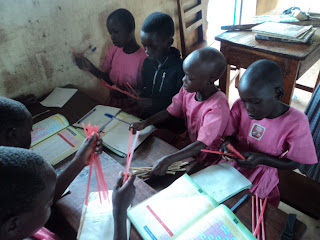 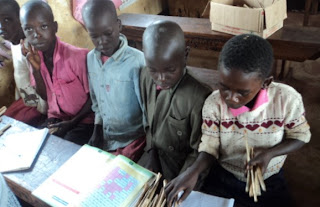 There was no shyness about demonstrating in front of the class. 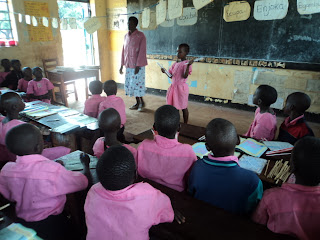 And all the marking was done there and then. I could almost hear the teachers thinking to themselves, 'Oh for another rainy day!'. 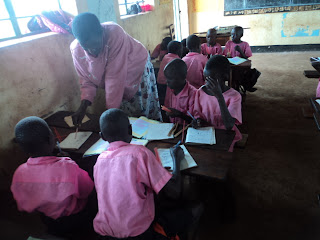 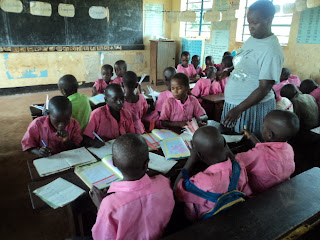 We noticed the display, again a change from the usual bare walls. 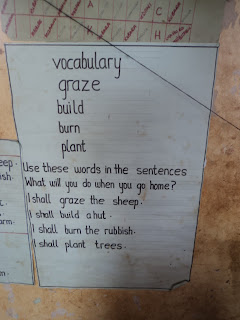 Discarded plastic water bottles come in useful for displaying the alphabet, although they were looking a little sad. 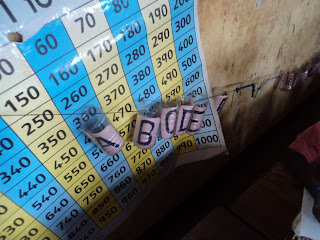 We popped our heads into Primary 6. It was an English lesson: 'How to make good buns'. Guided composition means putting sentences in order. We are not sure how many children had ovens at home. Difficult to bake 'tasty buns' over a charcoal stove or a three-stone fire. Ugandan textbooks do not always reflect the lives of the rural poor, ie the majority of the population. 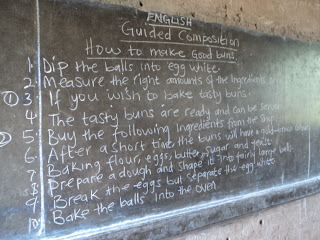 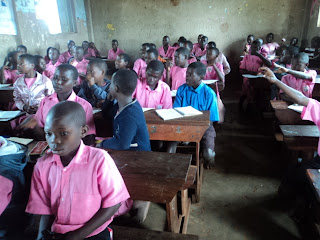 However, it was soon time for morning break. 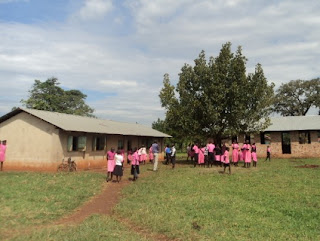 The school has a borehole and some of the children were using their snack containers as cups. 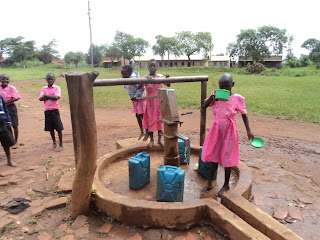 Soon they were all crowding round. 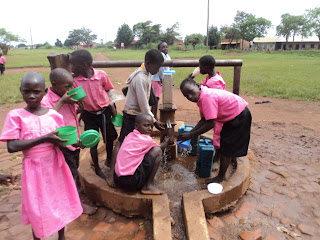 Everybody started getting a bit excited. Visitors with cameras are a great treat, especially if you've never seen yourself in a mirror before. 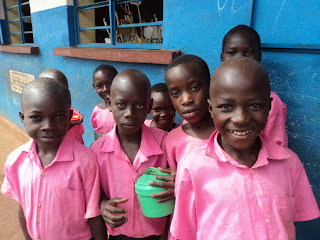 And then they all came pushing in, boys at the front as usual. 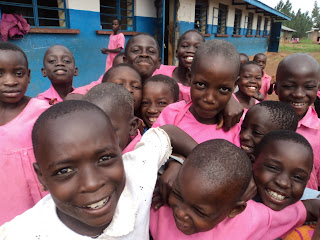 While the masses all trooped back into class, we spent a few minutes with some Primary 7 pupils. We had wanted to find out about their experience of school from Primary 1 onwards, and how it had changed, if at all. However, we soon found out that all of them had moved into the school from elsewhere within the last couple of years, a number of them from the north. 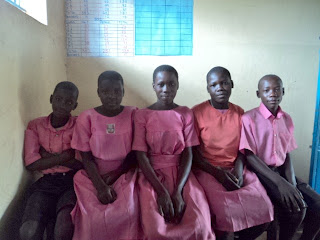 Masindi is a melting pot. People fled there from the north during the conflict and from Congo to the west for similar reasons - and continue to come. People have come from the east because of environmental pressures. Altogether, about 40 or 50 languages are spoken within the district, which makes 'local language' in the early years quite 'challenging' (as they say in Uganda).

Primary 7 were all desperate to go to secondary school, and a good one at that. Given the school's record of PLE results, they're not going to have that much choice, I'm afraid.

Still, it was an encouraging visit. We need these every so often, just to remind ourselves that improvement is possible. It was good to see a school making steady, if slow, progress. The support it had received from LCD and VSO was clearly having some impact. The children were getting a good deal. The headteacher and staff were committed, and, even better, they were actually in school. 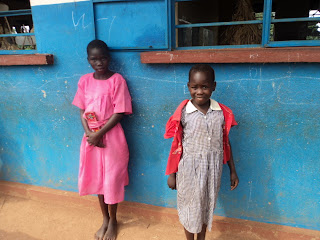 So, off we went in our ancient Landcruiser, squelching along the sticky red murram roads, bouncing over the ruts and trying very hard not to spray the passersby who trudged along pushing their bikes. 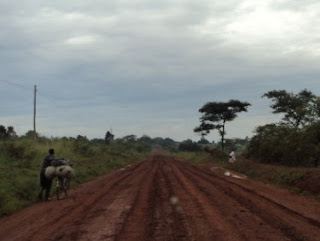 Despite the weather, a rainy season which was lasting far too long, we were feeling sunny and optimistic. We wished St Paul's all the best for their own journey.

Posted by Elisabeth Ritchie at 7:13 AM