Farewell, we hope, to Ebola

Well, it looks as if the Ebola outbreak in western Uganda is as good as over. About 400 people have been in contact with the disease, of which 20 or more have died, 190 have passed the incubation period and slightly over 200 are still being monitored. We ourselves, living in the east of the country, were not aware of any great panic. Indeed, once the authorities had woken up to the crisis, their response was measured and calm and their public health and travel advice sensible.

Ebola is a horrible disease which causes fever, diarrhoea, vomiting and bleeding. It is very frightening and has no cure. Fifty percent of those who come in contact with it catch it and of these 40-90% die. The virus is passed through direct contact with blood, saliva and other bodily fluids. However, fortunately, it is not a widespread disease unless it gets out of control. The virus is carried by fruit bats which pass it to humans who venture into their caves, or to primates, which are then illegally killed for 'bushmeat'. The district of Kibaale, where Ebola broke out, is just across the mountains from the tropical forests of Congo where bushmeat is commonly eaten. People go back and forth across the border - mostly in one direction just now, of course, because of the rebel activity in Congo. 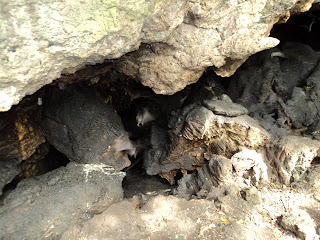 The spread of the disease beyond the original family in Kibaale was caused firstly by traditional burial practices and secondly by terrified neighbours fleeing the area. Contrary to reports, Ebola did not reach Kampala. What happened was that one member of the medical staff of Kagadi Hospital in the west was transferred to, and died at the national referral hospital, Mulago. Her four month-old baby also died. Sadly, her family members, like other relatives of Ebola victims, have since been ostracised within their village. In fact, the authorities are now giving those who have been discharged money and packs of provisions to help them settle down again.
One of the problems has been persuading people with symptoms of the disease to refer themselves to hospitals for testing and treatment. Many went first to traditional healers or to pray in churches, only turning up at the hospital when all else failed. Authorities had to place guards on the hospital doors to prevent patients from escaping, although some did and then died within the community. Each death requires a specialised burial team to take over, with traditional practices like open coffins banned. A hundred brave people volunteered to go and find those who could be infected and in danger of infecting others.

Thank goodness for the World Health Organisation, Medecins sans Frontieres and the Red Cross. Together with the Center for Disease Control and UNICEF they formed the task force which took control. Uganda's health services are pretty much in disarray and find it difficult to respond rapidly to epidemics. Since 2000, Uganda has had four outbreaks of Ebola, with about 300 deaths, including deaths of medical staff. To respond effectively, hospitals should have easy access to rapid diagnosis facilities and keep stocks of protective clothing, disinfectants and so on. This is rarely the case. Only about one in five health facilities has adequate staffing levels, only about 13% have collection and transport facilities for specimens and the only laboratory for serious diseases is in Entebbe, south of Kampala.

In fact, the first group of patients diagnosed with Ebola ended up locked in Kagadi Hospital with virtually no food or water: in Uganda, patients normally have family members with them to collect water and shop for and cook their meals. Meanwhile the medical staff left the hospital for fear of infection, and then went on strike demanding extra payments. The patients then broke out saying that they were starving and dying of thirst. The Resident District Commissioner and security personnel - wearing protective gear - had to calm them down and asked charities to donate food.

What is clear is that Uganda needs to have standard procedures for medical emergencies such as the Ebola outbreak, and then needs to follow them. Uganda is no different from many tropical countries in having endemic diseases such as malaria and cholera, and those like yellow fever and Ebola which crop up every few years. Ebola first appeared in 2000, in northern Uganda which at that time was still suffering from years of conflict.

The fact that some serous diseases are endemic doesn't mean that foreign visitors are seriously at risk, however. After all, tourists have access to vaccination and anti-malarials and should be sensible enough to avoid unsafe food and drink. They don't tend to mix closely with the inhabitants of remote rural villages or, as in the case of Ebola, attend their burials. It is the local population, poorly fed and with inadequate sanitation and hygiene arrangements, who are in danger.

The source of the Ebola outbreak last month was very localised and did not cause much fear and confusion to the population in the rest of the country. Markets and other gatherings were banned within the immediate area, but these steps were unnecessary elsewhere. It is a pity that much of the initial reporting was alarmist. Indeed, some tourists ended up confusing Kibaale, north of Fort Portal, with Kibale, south of Fort Portal, 90 kilometres away, and cancelled their chimp-tracking holidays. The last thing Uganda needs is to lose its precious tourist industry.

As you can imagine, the newspapers are now full of columnists pointing to the lessons of this latest outbreak. Whether they'll have any impact, who knows, but I doubt it. Forward planning is not a major feature of the health or education services, as far as one can see. The Health Minister is quoted as saying that Shs3 billion (£770,000) is needed to fight Ebola and prevent further outbreaks. Given that health services rarely receive their allocated funds and a high proportion of those that are delivered are stolen, there seems little chance of an effective system for surveillance and containment being set up. Lack of effective planning applies not just to outbreaks of diseases but to other crises such as landslides and floods.

Now we seem to be over this national emergency, who knows what the next one will be? How well prepared will Uganda be next time?


You may also find the following post of interest.

Caring for the sick in Uganda

Posted by Elisabeth Ritchie at 3:37 PM