Touching down in the Magic Kingdom - Kidepo National Park

Perhaps it's the effort you have to make to get there which helps to make Kidepo so special. Forbidden - quite rightly - by VSO from making the lengthy and risky overland trip across the rest of Karamoja, we opted to fly in and fly out. Why risky? Armed warriors still carry out cattle raiding, though not as often as before, thanks to recent attempts at conflict resolution. And even though we might be cattle-less, it would not be much fun to be relieved of our tyres in the middle of underpopulated semi-desert. Karamoja, arid for most of the year but impassable in the rainy season (August, since you ask...), occupies an area bigger than Rwanda but has just half a kilometre of tarmacked road.

So, it was the four-seater for us, with our friends Tommy and Sue and in the capable hands of Dan the pilot. 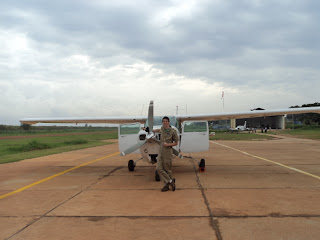 However, I think Kidepo's uniqueness is about more than its isolation and the related security problems. Located in the far north east of the country, this national park is probably the last remnant of Uganda as it used to be before colonisation. And therein lies its magic.

Once upon a time, I used to spend many hours battering up and down the A9 from the central belt to the Highlands of Scotland. On the way north and leaving Pitlochry behind me, I would see the high mountains straight ahead. Ah, I'm entering the Magic Kingdom, I would think, particularly on those wonderful bright winter days when the snow glittered in the sunshine.

Well, there's no snow in Karamoja, but, yes, Kidepo is also a Magic Kingdom. After a good hour or more crossing Lake Kyoga and then the green farmland beyond, the plane passes over, or round, a range of jagged peaks.

Before you know it, there before you lies mile after mile of grassland, true savannah. 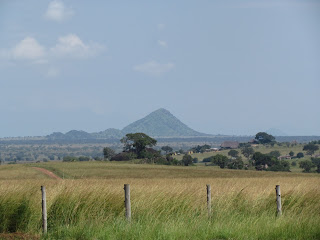 You touch down at the tiny airstrip, Dan having first swooped down and lifted off again, to chase the buffaloes away. Soon you're bumping along the murram road, across riverbeds and through high wet-season grass until you reach Apoka Lodge. 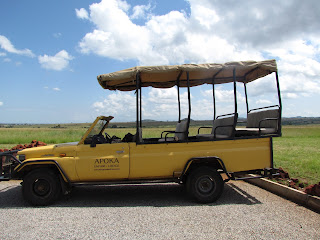 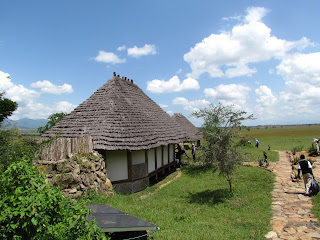 And then the magic begins - that is, after you've got over your immediate surprise at being accommodated in what looks, at first sight, like a thatched cottage whisked over from darkest Devon. One glance from the verandah and you are in no doubt that this is not the land of clotted cream and cider. 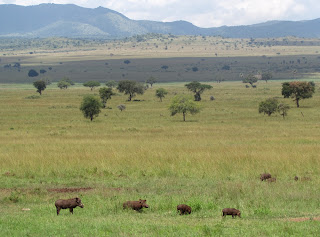 You start off quite modestly with a family of warthogs underneath your window. Peering down at the waterhole, you take the zebras in your stride. 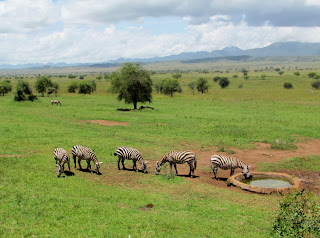 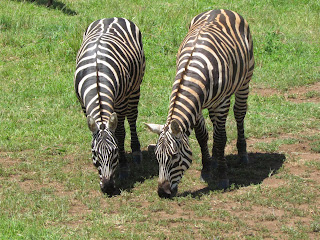 A herd of Jackson's hartebeest lingers below the swimming pool, ignoring disdainfully the comatose buffalo. 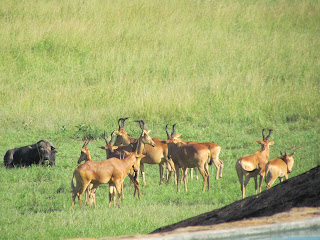 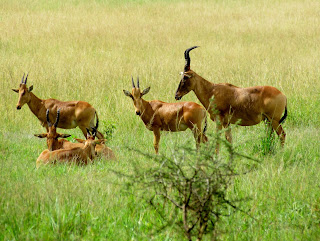 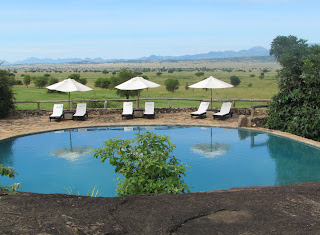 A patas monkey materialises in the middle of the grass, jumps onto a nearby wall and then pads away around a corner. 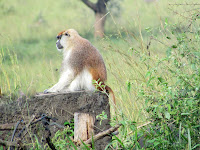 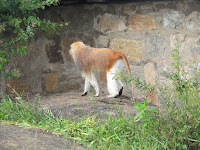 And before you know it, you suddenly realise that half the animal world are living out their domestic lives right in front of your eyes.

A red-cheeked cordon bleu takes a quick bath in a puddle. 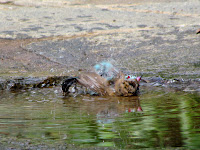 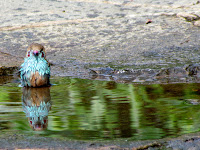 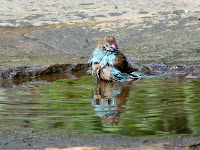 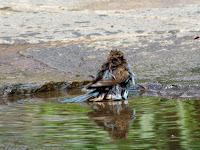 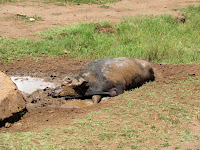 Buffalo think mud is better for the complexion. 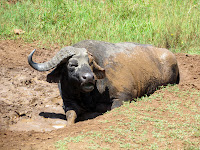 Whereas when zebra are not enjoying the shade under the restaurant, they find a dust bath a pleasant way of spending a hot afternoon. 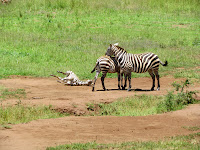 And, at first sight, everyone seems to get on well. The teenage waterbuck engage in playfighting. 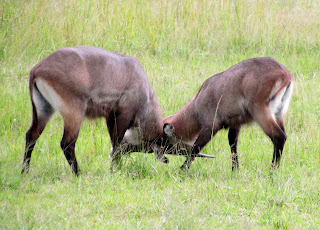 Some sort of kingfisher (?) perches amicably next to the Greater Blue-eared Starling, a bird which I used to think was stunning until I made the acquaintance of his altogether grander relatives the Superb Starlings. 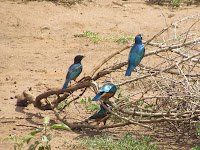 The Southern Ground Hornbill prefer to go around in pairs. 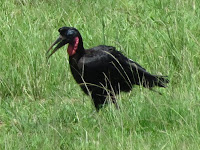 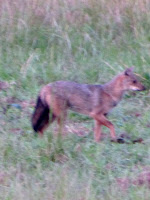 As do the jackals, though I could only snap one.

The creature my heart went out to was this tiny dwarf antelope. 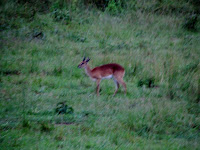 I saw it settle down in the grass within twenty yards of the lodge just before the sun set. Why my concern? Not everyone in the kingdom gets on well together. Only the evening before as we sat down to dinner at eight o'clock we had heard the most terrifying roar from only a few yards away, near where that little antelope was now standing. The roar was answered by another roar as two lions circled the lodge, twenty yards away at most, light 'shadows' in the dark of the night. And they went on circling for the next three hours and long after we had been safely accompanied back to our rooms. The roaring continued as we got ready for bed, within yards of our cottage. Peering nervously from the verandah, I was acutely aware of every snuffle and rustle and in the morning I spotted mysterious footprints outside the door.

A land full of wonders, and we hadn't even left the lodge. Come with us on our next expedition as we explore more of the Magic Kingdom. 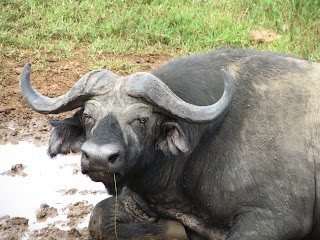