What can we learn from Kiprotich's triumph?

I must admit, we were among the guilty. We don't have a television at home, so we rely on the precious BBC World Service and an irregular Sunday evening 'fix' of sports TV at The Barn. However, this Sunday evening, we didn't go out at all. The Olympics were as good as over, the closing ceremony was on too late at night given the time difference and Uganda was well and truly out of it - we thought. Not a chance in the marathon, we thought. The only chance had been Kipsiro, we thought, and on Saturday he had come 15th and last in the final of the 5,000 metres.

We had forgotten about Stephen Kiprotich. Well, not 'forgotten', exactly, but, to be honest, it never occurred to us that he would win. We had sunk into the true Ugandan mindset: low expectations, doom, gloom, slit-your-throat stuff.

We were not entirely oblivious, though. Stuart had on the BBC's frustrating 'real time' (ho, ho!) 'live' (ho, ho!) commentary on the Olympics provided for poor sods like us who are sick of seeing 'Sorry, this media is not available in your territory' every time we dare to try even a very out-of-date video clip. Whoever was reporting on the marathon on Sunday, however, just couldn't be bothered typing the words in. We only found out that Kiprotich had won because of our friend Phil who was the first to post the news on FB. (Thanks Phil!) 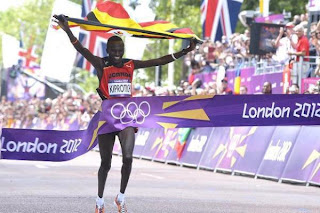 And then GeoLodges (another thanks!) posted this fantastic photo.

So, being a Morris, and therefore always looking for moral lessons in events (and not one of the Ritchies who just enjoy themselves) I started thinking. (Always a mistake, says Stuart.)

What can we learn from Kiprotich's triumph?

Firstly, there's the obvious 'Don't give up...it's not over until the fat lady sings...' and similar inanities. It was not so much that the country looked as if yet again it would not win any medals. That is true of a lot of countries. You can't expect poor countries to spend as much on training and supporting their athletes as rich countries. They have other priorities, like feeding and educating their people. However, it was the sheer awfulness of the Ugandan officials' betrayal of their national team, that made it seem impossible that anyone would rise above that. How could a young man whose country had provided him with as good as no financial or practical support, had shown as good as no interest in him and whose officials had (allegedly) 'eaten' what resources there were still care about winning in his country's colours?  Kiprotich won because he believed he could win. He had already shown what he was made of when he overcame a serious three-year long illness in childhood. Winning the gold was a very personal act of determination.

That sense of belief is in pretty short supply these days. Uganda is in a 'slough of despond'. Public services are getting worse, officialdom more corrupt and it's a long time till the next election. Even then, Ugandans expect to be lied to, their heads broken and their votes stolen as part of the way 'democracy' plays out. And so many have just given up, good people too. Good people who just don't care any more, good people who see theft and greed across the table but look in the other direction. Not Kiprotich, whose perseverance and grit won him his medal in the end. His supporters would have been delighted with a bronze, but he wanted the best.

"Before the race I thought a Kenyan or Ethiopian would win," he said. "I didn't believe it could be me. But I kept in touch and, when it came to three miles to go, I just decided to go. I've joined the champions and I am very happy."

We have to be careful, though. The second message is not to expect too much from this young man and his victory. 'National salvation' was the headline on the front page of the Monitor, sentiments echoed by the euphoric posts of its online readers. I doubt it. The most that can come out of this Olympic win is that the rest of the world will have something else to think of when Uganda is mentioned, not just Idi Amin. To turn round a country needs more than a broad smile and a strong pair of legs. 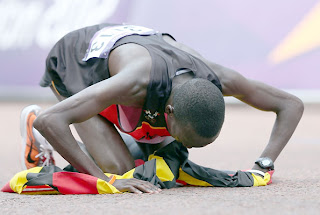 Thirdly, there will be a lot of jumping on the bandwagon. The government-owned New Vision newspaper has just launched its rapidly organised 'cash for Kiprotich' campaign, with well-known corporate businesses brandishing their cheque books with the same enthusiasm with which the medal-winner waved his flag. And some public services too, inappropriately and ironically. A pity they didn't all think about buying him some running shoes before the Olympics, I thought sourly when I read this. And not just me. Scores of grumpy online readers apparently think the same.

With similar cynical opportunism to that of their business equivalents, politicians are lining up to shake Kiprotich's hand. It goes with the territory, of course. All sorts of plans are already being made to provide financial support to athletes now, though whether it ever materialises, we will see. The Sports Minister yesterday suggested to the Ministry of Education and Sports' Education Committee that Shs6 billion (£1,550,000) was needed in addition to the Shs5.2 billion (£1,340,000) that the Ministry already receives for sports.

What will young people take from Kiprotich's triumph, though? Will they have learned that if you want to do anything, you have to do it alone.? That no one will help you, certainly not the services which take your parents' taxes?

Well, not exactly true, and not exactly no one. Kiprotich's first promoter was his primary school teacher - good to hear when so many stories about the teaching profession here are just plain depressing. It was his coach who suggested he join the Uganda Prisons Service to benefit from its training regime. And he was right. The UPS has supported him well and appears to be appreciative of his qualities. A spokesman has called him a 'determined, very simple but hard working young man'. (Don't be put off by the word 'simple'. It's a compliment in Uganda where a lot of successful people are corrupt and devious.) The qualities of determination and hard work are not to be sniffed at. The UPS now wants to promote Kiprotich. Another message there: be flexible. Go sideways, if necessary, to get what you need.

Perhaps the gold medal will bring this fragmented country together. Kiprotich comes from the neglected east of Uganda, not the relatively prosperous south west, yet he is rightly seen as the champion of 'Uganda'. Perhaps his win will bring the members of the East African Community together. He trained alongside his Kenyan rivals, their country providing him with the facilities his own country lacked. Teamwork in competitive sports, and across national boundaries too. You could see it in their broad smiles when the three of them stood together: friends and competitors - though the words, 'he's actually really a Kenyan' may be taking across-the-mountain brotherhood a bit far. (Though Kiprotich is one of the Sabiny, a branch of the Kalenjin tribe to which the two Kenyans belong. Indeed, one shares his name.)

However, the key thing is that despite all the recriminations which soured Uganda's Olympic bid, at least Ugandans now have something and someone to be proud of. 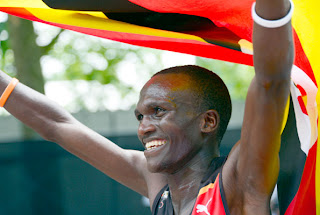 What happened to Uganda's Olympic hopes?


All the information in this post has been taken from articles in The Daily Monitor.
Posted by Elisabeth Ritchie at 8:14 PM

Email ThisBlogThis!Share to TwitterShare to FacebookShare to Pinterest
Labels: sport