What happened to Uganda's Olympic hopes?

While obviously rooting for Team GB, and delighted by its array of medals and by Andy Murray's success today, we also wanted Moses Kipsiro and his Ugandan team mates to do well. After all, Ethiopians and Kenyans excel at athletics. Why shouldn't Ugandans?

Ugandan runners like Kipsiro hail from the east of the country, belong to the same ethnic group as their Kenyan rivals, live among the same mountain ranges and are separated only by a crazy nineteenth century border.  Kipsiro, Uganda's greatest hope, had an unfortunate fall and achieved 10th in the final of the 10,000 metres. Others have come nowhere near achieving a medal. We have all our fingers and toes crossed for Kipsiro to come up trumps in the 5,000 metres (heats on Wednesday, final on Saturday).

Well before the Olympics, Kipsiro and others had already had a lot to say about the Ugandan team's chances of success. The newspaper headlines say it all.


And the headline which appeared the day before they flew out: Officials earn 5 times more than Olympians.

It turns out that virtually none of the government money meant to be used in the lead up to the Olympics ever materialised. Preparations which should have started six months or more in advance, actually began just before the team left.

Most of the money provided by the government went to the 18 public officials and not the 16 athletes whom they were accompanying. The list of those being paid for by the government included hangers-on additional to the 18 public officials, such as highly-placed politicians and other national figures, many of whom, unlike the athletes, flew business class and brought along personal guests, all at public expense.

To cap it all, one of the Ugandan team missed the flight to London as he was still in Nairobi. Planning? Keeping a diary? Using a watch? Not key Ugandan skills, clearly.

Still the team got good advice from the President before they left. 'It is good that you have been training in Kapchorwa hills [eastern Uganda] where the altitude is high. This gives you better training because there is little oxygen at such high altitudes. By the time you come down where there is plenty of oxygen, you can run like a deer. You should concentrate your energy on the field instead of going to nightclubs, drinking and sleeping with girls.'

Not likely they'll be doing much of that given their daily allowance of $72, compared with the officials' allowance of $350-$750 per day, and half what their Kenyan neighbours are getting.

Meanwhile, the Ugandan athletes themselves, having given up on official support, had to organise and pay for their own training before the games.  Some had no money to buy proper running shoes. During their training, they used to run their races without access to water bottles, as they couldn't afford them. No sports official oversaw their preparations or checked how they were getting on: a far cry from the carefully planned residential training which athletes in other countries like Kenya, let alone Europe, China and the USA, experienced.


The Ugandan athletes had no running track and had to move over the border to Kenya, at their own expense, in order to train. Oh, and by the way, they also had no coach. Kipsiro paid his own rent, paid for athletes to set the pace for him in training as well as his own physio and hired his own coach from the Kenyan Prisons department.


And it is not just the runners. Ganzi Mugula, the team captain and a swimmer, had done almost all his training in the Makerere University swimming pool in Kampala, half the size of an Olympic pool. There is a a suitable pool in Uganda, actually, at Speke Resort also in Kampala. We go there every so often ourselves. It's a great pool for us, and  a good one for professional swimmers, certainly a lot better than the Makerere pool. Was it quite out of the question for someone to pay for Mugula to swim at Speke Resort? 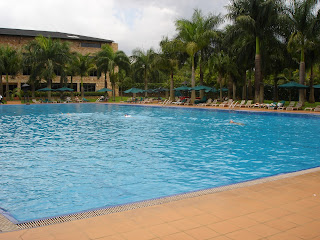 When Kipsiro won gold in the 5,000 and 10,000 at the 2010 Commonwealth Games in Delhi, the President promised him a house, a four-wheel drive car (not an extravagance if you've ever seen the roads in eastern Uganda) and a running track. Empty promises - promises which the Ministry of Education and Sports was responsible for delivering on. Perhaps the Ministry was too much taken up by the ongoing Commission of Enquiry into corruption in its own (alleged) expropriation of funds for universal primary and secondary education to consider its responsibility for the nation's sportsmen and women.

After Kipsiro and Negesa won gold at the All Africa Games in Maputo last year, the President promised the national team $10,000. That money also didn't appear, until the Minister for Sports in some embarrassment asked for it just as they were leaving for London.

Anyway, Kipsiro said, bitterly, 'Everything is a mess. Government is not bothered about sports. They make empty promises. They are good at that...The bazungu [whites] are known for fulfilling their promises. They deliver. I have learnt that about them. But for us, we are very good at promising. There is nothing more I can say about government.'

So, the usual story of corruption, power politics and....basically....public officials who couldn't be bothered. And that's the sum of it really. That is why Uganda's hopes at the Olympics have been dashed.

'One of the most common accusations regarding Ugandan sport is lack of forward planning,' said the journalist Mark Namanya. Actually, not just sport...  And not just planning.

We sometimes feel 'Can't be arsed' could be the motto of Uganda: teachers who can't be arsed teaching, inspectors who can't be arsed inspecting and and nurses who can't be arsed nursing. A story a couple of weeks ago involved the midwife who was 'too tired' to help a pregnant mother, who had already been in labour for several hours, to deliver. She locked up the health centre, left the woman in the compound outside and went home to bed. The woman - and her unborn child - were found dead in the morning.

What about sports, then? Can anyone be arsed about sports? After all, Kipsiro says there's plenty of potential in the country. What are schools doing about all that young talent?

Now remember, I am not myself a great sportswoman. Vicious school hockey put paid to that a couple of score years ago. However, I am now persuaded by others that in Britain PE teachers, even male PE teachers, have become human beings over the last 20 years and are now interested in everyone, not just the first eleven. Stuart - who is a sportsman - says that the key issue for PE teachers is helping all young people to  achieve their 'personal best'. And even I recognise that. I might hate competitive sport, but I do understand about getting better compared with my previous performance when I work out in the gym.

The concept of aiming for, and being praised for one's 'personal best' is completely alien to Ugandan schools which largely appear to exist in order to eliminate children from the education system. Competition for places, for funding and for the teachers' attention are what matter. Examinations help sift out the ones who are 'not worth' bothering with - roughly three quarters of the population under 15. If you don't reach the mark, you will be persuaded to leave or to 'repeat' (a euphemism for being thrown on the waste heap). If 'personal best' is an alien concept in 'academic' learning, how much more alien it is to physical education.

Ugandan school children are not unfit like many British children are. They walk several kilometres to and from school every day, carry heavy jerry cans of water on their heads and dig their families' fields after school and at weekends. (Nutrition, of course, is a different matter.) So they don't 'need' to do PE and sports in the same way that British children do.

However, they do need PE; they need PE and they don't get it. They need PE to alleviate the mind-numbingly dull educational experience which characterises Ugandan schooling. They need PE to give them something to be good at if they're not very good at learning things off by heart or even if they ARE good at learning things off by heart. They need PE to give them a sense of freedom from the classroom. Why can't they run round the compound? It doesn't cost anything and might just give some of them a taste for athletics. They could also do some practical mathematics at the same time!

More important than anything, PE teaches that 'delayed gratification' is worth it. Sportsmen and women learn self-discipline. They learn how to plan their training schedule. And not just plan, but plan well in advance. They learn about implications and consequences - 'If I don't do my training, I won't be fit enough to run.' They learn about setting targets, aiming for them and achieving them: rewards in their own right. These are the lessons which Ugandan children need, which Ugandan sport needs and which the country as a whole needs.

On the contrary, what models of self-discipline do Ugandan children observe at school? Teachers who don't turn up for work or, if they do turn up, don't bother going to class to teach.

Perhaps if Idi Amin had got his way and the Ugandan border had been redrawn just short of Nairobi, all those Kenyan runners would now be Ugandan. Would that have made Uganda's chance of medals any better?

Probably not. Winning at sport has a lot more to do with national and personal attitudes and meticulous preparation than with the vagaries of DNA or the quirks of a national border. Above all, success at sport has to do with being bothered. A country whose public officials couldn't be bothered to arrange for its national athletics team to be trained is a country which has completely lost its sense of national pride. It is also in danger of not being taken seriously as an international player in any context.

Just another embarrassment for the Ugandan people.

Postscript: Gold for Steven Kiprotich in the marathon! What fantastic news...


All information included in this article has been taken from articles in The Daily Monitor.
Posted by Elisabeth Ritchie at 8:39 PM

Email ThisBlogThis!Share to TwitterShare to FacebookShare to Pinterest
Labels: sport