Changes for the better at Royal Pride

Three weeks into the new term, and we were due a visit down to Royal Pride. This is always a bit of an expedition. We cover up against the mosquitoes and make sure we have sensible shoes with solid toes before venturing down the refuse-filled lanes of Mutungo and jumping over the open drains. As we descend towards the swamp and pass between the pit-latrines, the smell of sewage gets more and more pungent. When you really feel it couldn't get any stronger, there you are, you've arrived at the school!

What a change since we were last there. The new kitchen, built with contributions from people in the UK is now up and running, with the food provided by a number of people. The purchase and delivery of porridge is being managed by the charity Lessons for Life so there is no problem about its continuing once we go. 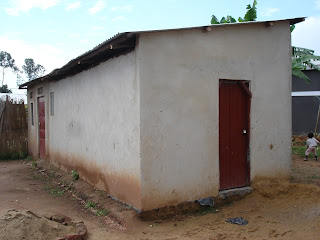 Here is the cook, a member of the community, probably doing this in exchange for school fees, but I didn't ask. She's just finished cooking and serving the porridge. 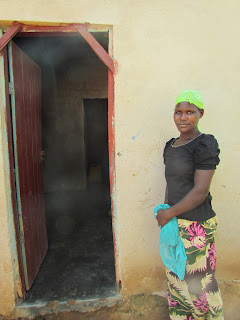 Through the door at the far end of the kitchen you can see another door into the store, where the bags of food are kept. And here are the stoves, a vast improvement on the three-stone affair previously being used, although they may not look very technologically advanced to you. 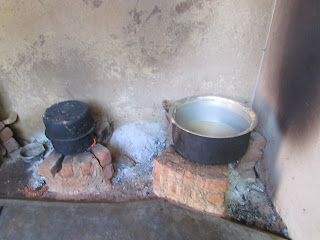 On the right is the now empty pan of porridge and on the left are the beans cooking for the teachers' lunch. It has taken me some time to come to terms with schools like Royal Pride feeding their staff nourishing, if boring, lunches: posho (cornflour 'porridge') and beans. However, I am aware that lunch is part of their salary. Teachers in 'private' schools (which is what a community school like Royal Pride counts as as it receives no government grant) earn far less than the badly paid teachers in government-aided schools. The latter earn Shs250,000 per month (£61) if they are basic grade teachers in a primary school. In Royal Pride, they earn far far less, a major issue in attracting and retaining good staff. The early years teachers have been there for years but Godfrey has to teach P5-P7 himself.

One major expense is cooking fuel. The school uses firewood as it can't afford charcoal. This wood has to be brought from a good distance outside the city so transport is also a major expense. I would like them to have a couple of fuel efficient stoves, but there is only so much one can do. Anyway, the firewood is precious and must be kept secure and dry. The only place is the kitchen. 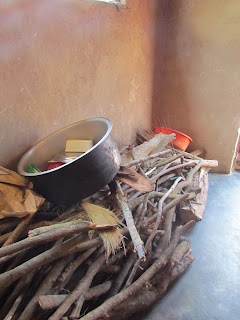 The children certainly appreciate the porridge. Each child brings a precious plastic cup from home and that is what they drink their porridge out of. 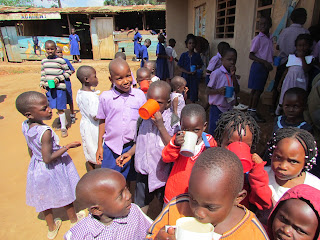 Some of the children are still wearing the flimsy old gingham uniform. Their older siblings, however, have mostly graduated to the more robust royal blue. It is till playtime and the play equipment is crowded with youngsters, the prefects keeping an eye on them. The two women sitting in the foreground have brought pieces of fried cassava for the children to buy as a snack. 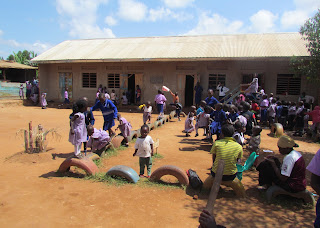 The younger children all gather round excitedly to have their photos taken and then be shown the result - fascinating if you have rarely if ever seen yourself in a mirror before . As usual the nice quiet ones turn up first and the rest push and shove to get in front. 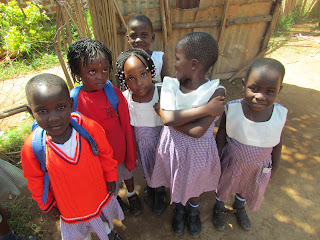 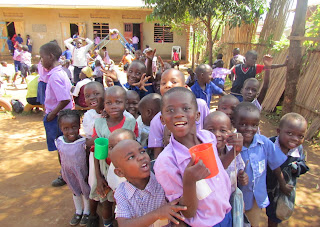 The school now also has a metered water tap with 'safe' water, provided by National Water, the connection paid for by friends in the UK. 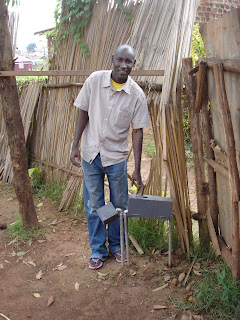 Here Godfrey the headteacher is demonstrating how the tap is locked after school hours. The water is used for cooking but one issue is encouraging children to drink during school hours as they are not used to having water readily available. The water has to be boiled and is then transferred into a large plastic water container to cool before the children can drink it. Even though it is 'national water', it is not entirely 'safe'.

The school has planted a rather sad looking mango tree, for shade and fruit, but I am sure it will recover. If you look carefully, you will see a handful of leaves in amongst the protective straw. 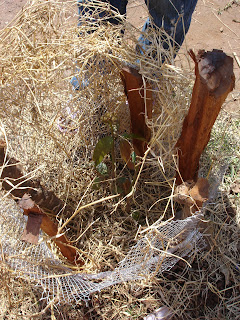 One very recent improvement has been the addition of an internal wall in the main brick building, together with a heavy metal security door, also paid for by people in the UK. That is because this classroom has become the place where Royal Pride's new textbooks are going to be stored. Just now they are in Godfrey's very crowded little headteacher's office, waiting for some shelving. We are going to give the school some of our furniture when we leave and then they should be reasonably well organised. 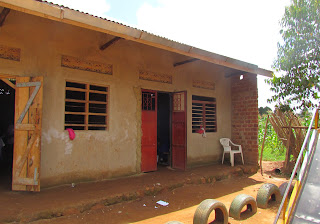 All the windows in the main building now have bars but those on the right are metal, hence the use of that classroom as book store. Yes, the books would be stolen by local people and sold on, even if their own children attend the school, so we can't be too careful about any resources. The building is looking good, thanks to a lot of hard work by parents. They are in the process of plastering the walls, have improved the windows and provided proper blackboards built into the walls. So, what about the textbooks? Friends working for Education Scotland, the inspection and curriculum improvement agency in Scotland, contributed a lot of money on the retirement of Grant Mathison, a long-serving maths inspector. Stuart and I went along to the best publishers here - MK Books - and managed to buy maths textbooks for each class and readers in English and Luganda for the early years. We took them down during the holidays but went back yesterday to see them in use. The girls below are standing with their backs to the papyrus wall dividing the two classrooms. The children are immensely grateful for the textbooks. They have never had any textbooks before, for any subject. It makes Royal Pride just like a 'real' school! 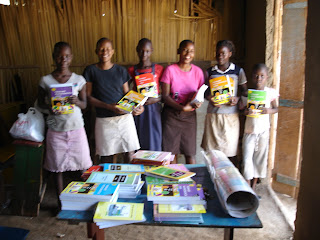 Before we bought these books, only the teacher had a copy of the textbook. There was an awful lot of copying out! Even now children have to share, but it's a lot better than it was. The national target for textbooks per pupil is one to three, and Royal Pride is now meeting that target. Here are some members of Primary 4 working away. 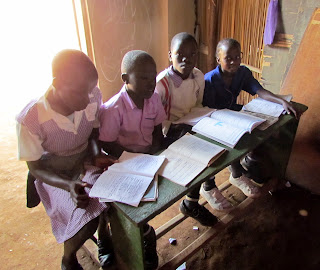 It is quite difficult to take photos inside the classrooms as they are quite dark and with the bright light streaming through the windows, the contrast is difficult to deal with.

The national target for desks per pupil is also one to three. As you can see, Royal Pride can't quite manage that. 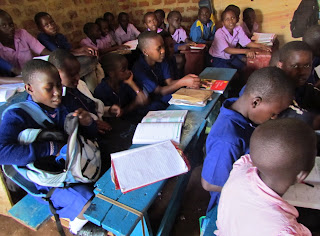 The next class along is working away, desk to pupil ratio slightly less favourable. 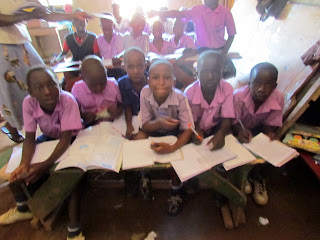 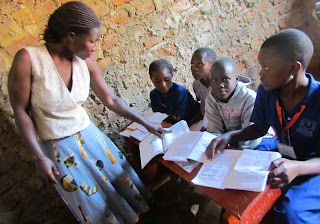 Things are bit more chaotic when we reach the end classroom, shared by the nursery, Primary 1 and Primary 2. First we have to be treated to a rendition of the classic song which goes something like 'I wash my face, I clean my teeth...' and so on. This is marginally more interesting than 'This is a wall, this is a door....'. All songs come with actions. The youngsters at the front are particularly energetic. 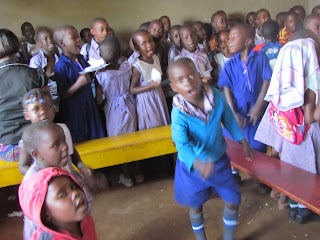 The nursery demonstrate their knowledge of shapes, courtesy of some posters I liberated from the DES store. 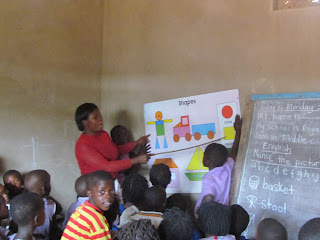 Primary 1/2 are just about to start their English. 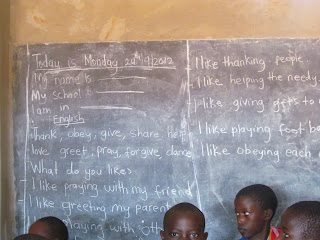 When it comes to Primary 7, things are serious. Registration from the Primary Leaving Examination was completed last week. It has taken ages for Godfrey to collect in money from parents, for all this has to be paid for. The cost is minimal by our standards - £1 or so, but many families are paying in instalments. 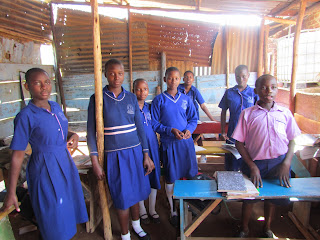 Yesterday's English lesson, how to write a formal letter, is still up on the board. It is a letter of application to the headteacher of St Mary's Kisubi, a respected secondary school, for a place at the school. This is fantasy land. None of the children from Royal Pride have a hope of getting a place at St Mary's. 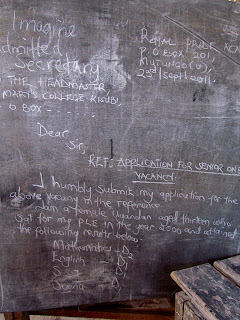 Their teacher, who comes into Royal Pride three times a week to do maths, insists that they are photographed at the front, proudly holding their books. 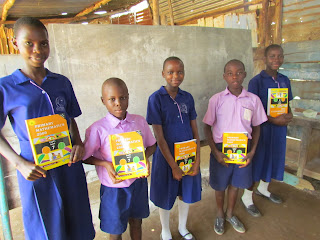 Primary 7 occupies one of the worst classrooms in the old wooden block. 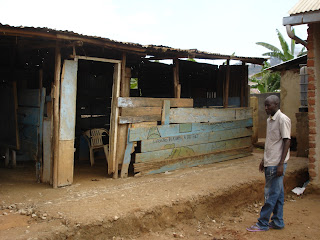 The school's main priority is to replace this block as it is dangerous, particularly in the wet season - as now. Only the oldest pupils are allowed to use it. Last year, the youngest children used it and had to be rescued by the community during one particularly bad thunderstorm and flood. 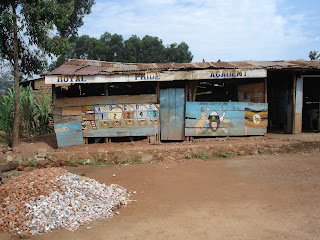 The parents have produced 1,000 bricks and we're contributing loads of sand, cement and so on. The parents will build the new brick walls around the old wooden ones so that they can continue to be used while the work is done. The next challenge will be iron sheets for the roof.

So, things have moved on significantly at Royal Pride. The parents have done a lot, but many things could not have happened without contributions from people in Britain. You have transformed the learning experiences of these young people. Thank you. 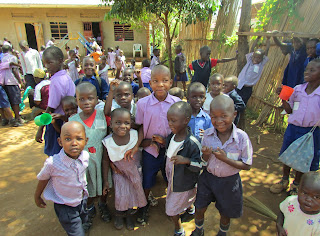 Posted by Elisabeth Ritchie at 6:22 PM