The only negative aspect about morning safaris is the knock on the door at 6.15. Apart from that they are absolutely wonderful. We gulped down our coffee and muffins, piled into the Apoka-mobile and bounced along the murram track.

We might still have been sleepy-eyed, but not so the animals. The buffalo and zebra looked only slightly surprised and decided, on being stared at so rudely, to stare right back at us. They usually prefer their grassland to themselves, but we were no threat. 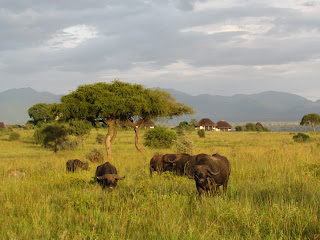 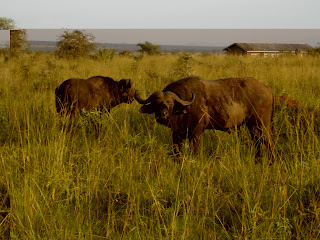 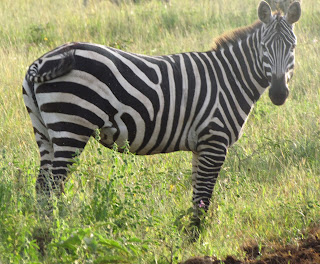 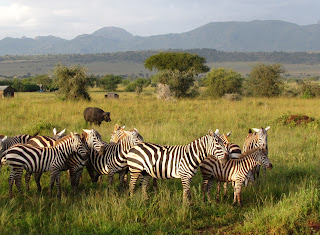 The warthogs were singularly unimpressed and certainly weren't going to get out of our way. 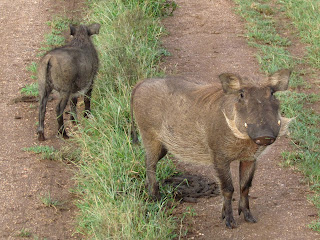 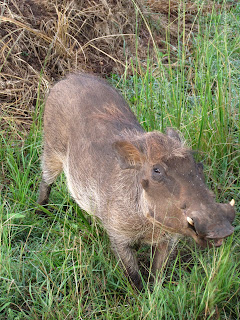 All of a sudden we stopped in our tracks. Not far away was a beautiful sausage tree, but it appeared it was not this we were being called to admire. The sharp eyes of the guide had spotted something else. 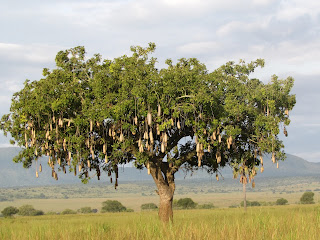 Tommy and Sue started pointing. Out came the binoculars. Stuart, somewhat unkindly accused me of being blind. Could I see anything?! And then a shape gradually emerged from the crook of the tree. 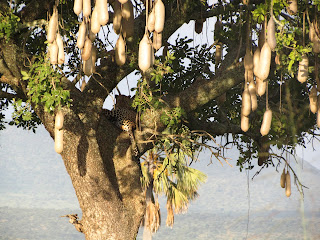 Thank goodness for the telescopic lens! There was a leopard staring out over the plain. In turn, he turned round slowly and stared at us. 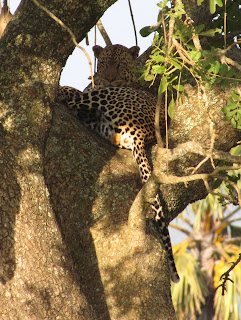 Somewhat unnerved, we sat down and began to bounce along our way again, the wet-season grass high on either side. 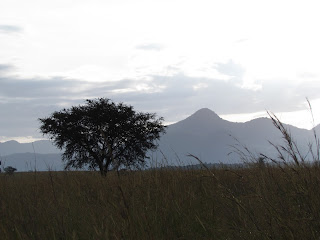 Not far off was a treeful of raptors. Some were Lappet-faced Vultures, and the one flapping its wings is, I think, a Ruppell's griffon with, possibly, a Black-shouldered Kite on the right. 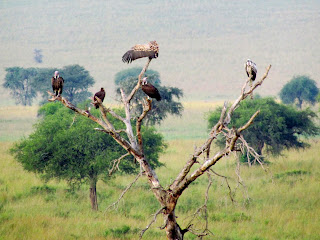 Huge herds of buffalo appeared on either side, half-hidden by the grass. 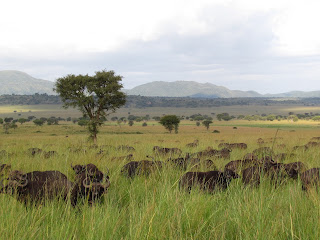 Strange rocky outcrops interrupted the skyline. On one was a group of rather odd green-roofed buildings: Idi Amin's Karamojan hideout. 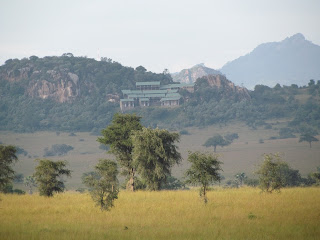 Frightened birds, like this family of helmeted guinea fowl, scurried along the track in front of us, lacking the sense to jump off into the grass. 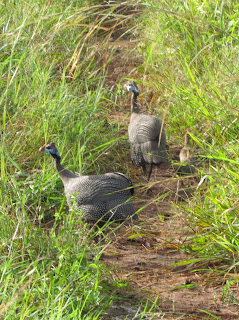 All round us misty mountains hovered dimly, silhouetted on the skyline. 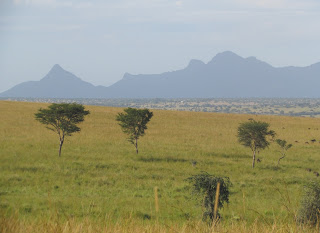 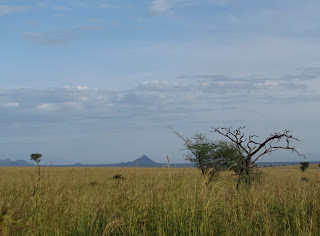 The plain stretched for miles, punctuated by solitary trees. 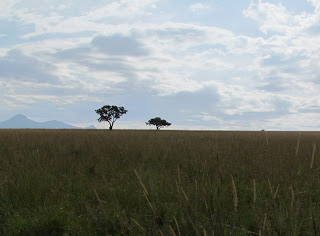 A landscape without people and one where the animals were, for the most part, invisible to human eyes. 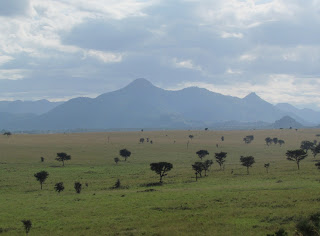 Soon it was time for coffee. We stopped at a rocky outcrop with views on all sides. 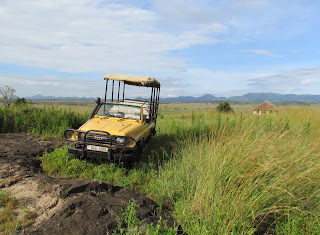 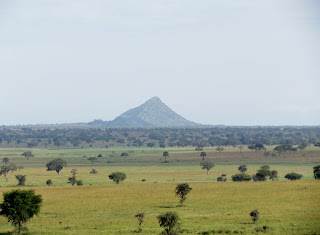 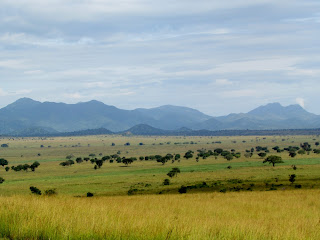 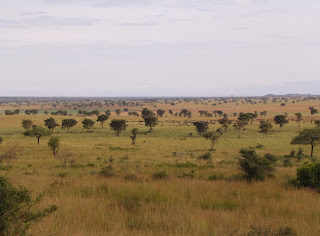 Coffee over, back we bumped, catching glimpses of birds. Could this be a Dark Chanting-Goshawk, or do I just like the name? 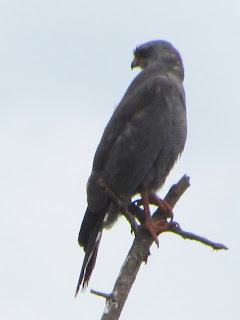 As for this beauty, I just don't know. It could be something perfectly ordinary but I think it may be a Silverbird. 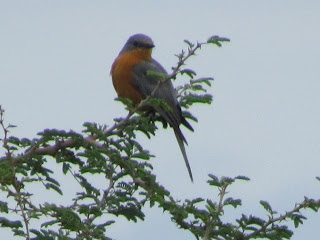 Back at Apoka Lodge we saw our familiar favourites, the Superb Starlings. 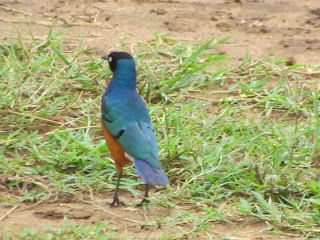 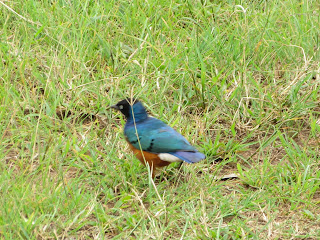 As we walked back to our cottage, there were the antelope, this little oribi... 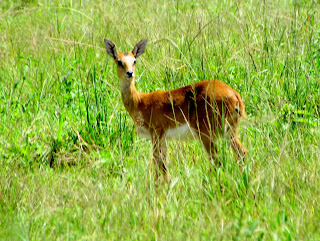 ...and a herd of Jackson's hartebeest. 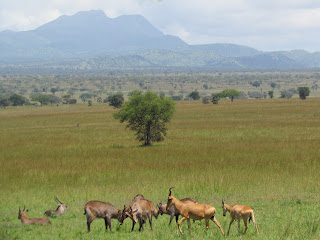 Sunbathing lizards scurried back under the rocks. 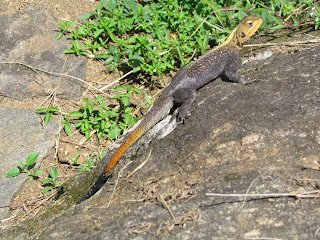 We'd had a good morning out on safari. Now it was time to do a bit of sunbathing ourselves.