Our last word on Karamoja

In Uganda, it is unusual for us to go on holiday to places where we haven’t also worked.  The advantage of this dual perspective is that while we thoroughly enjoy the comfortable lodges, game drives and walks provided for visitors, we remain well aware that the daily lives of the local population in the hinterland of parks such as Queen Elizabeth and Murchison can be hard. Poverty, disease and malnutrition lurk within kilometres – sometimes metres - of the tourist routes. Groups of grass-thatched mud houses may look very picturesque but life in such communities can be hard.

However, we weren't able to do this in Karamoja. The Kidepo Valley National Park is in the extreme north of the region. (It is the only green area of Karamoja on the map below.) Our sponsoring organisation does not allow us to travel by road in the area; nor does the Foreign and Commonwealth office (see the map below). When friends from other NGOs and donor organisations working in Karamoja travel there, they drive in convoys, with armed guards, spare tyres and diesel and – sometimes, so we hear, in the recent past – flak jackets. So we have had no chance to deepen our understanding of the lives of the people living in Karamoja, beyond the glimpse we saw when in Kidepo. 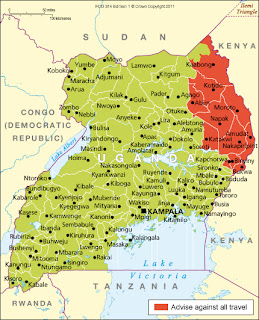 So, as an inadequate substitute for first-hand observation, we are sharing some of the news stories from Karamoja over the last six months, some positive, some negative. They may suggest something of the challenges of living in the north-east corner of Uganda 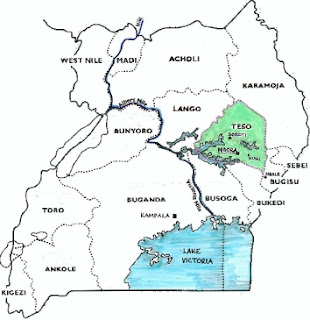 Although Karamoja may appear to be one of the most culturally conservative parts of Uganda - indeed other areas talk about 'not waiting for Karamoja to develop' - new industries, ways of life and opportunities for employment are developing even here. Or especially here, given the large tracts of apparently 'empty' land. The most recent development is in mineral exploration. Today it was announced that a gold-mining plant had now been set up in the Moroto area. The President will be at the opening.

It may seem that the challenges of climate change, cultural practices which set Karamoja apart from the rest of Uganda and weak public services are almost insuperable. However, Mrs Museveni, Minister for Karamoja, is achieving some success in bringing the main parties together. In February, New Vision reported that at a meeting with the Minister, Karamojan leaders had agreed to work together to solve the region’s problems, particularly in education and health.

You may also be interested in  A village in Karamoja, lots of children and some unexpected lions

Posted by Elisabeth Ritchie at 7:23 PM