Learning about primary schools in Malawi

To be honest, the main focus of our work in Malawi has not been the fine detail of the country's school system. However, we did need to know something about it to provide some sort of context for what we were doing in our work at national level. Fortunately, Link Community Development (LCD), which, with the Scottish Government, has supported our work out here, has the hands-on experience which can be very helpful for people like us who are trying to grasp the main details in a very short time.

LCD has been working in two districts, Dedza and Mulanje, since 2006/2007 as part of the Scotland-Malawi Improvement Project. The Scottish link is not something you can ignore, certainly once you're inside the LCD office in Dedza. 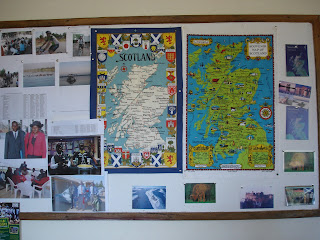 As in Uganda, the LCD office is located within the local district education offices, which helps communication and joint working with district officers. The Dedza offices are well kept and attractive. 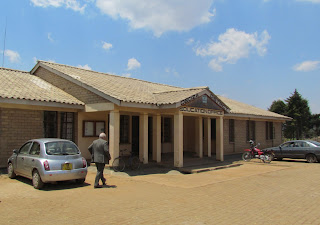 The district offices sit at the bottom of one of the hills which surround Dedza. 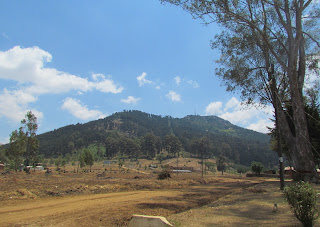 If you look in the opposite direction towards the shadowy hills, you're staring straight at Mozambique. 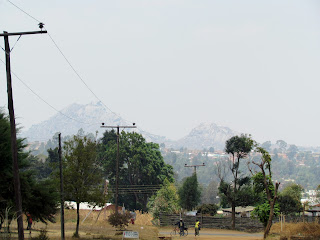 As is always the case with reputable donor organisations and NGOs, LCD works within Malawi's Education Sector Plan. This plan focuses on priorities in primary education which are common to many developing countries, such as:
These priorities are grouped under familiar themes: quality and relevance, access and equity, governance and management.

Primary education is of fundamental importance as it is supposed to be 'universal' and is likely to be the only education most of the population are likely to experience. Secondary education, on the other hand, is currently accessed by about 10% or so of the relevant age cohort, less than in Uganda where roughly 25% of young people go on to secondary education, although many fall by the wayside. Other developing countries have similar issues and similar priorities. However, what do the issues lying behind the words of the national strategy actually mean in a poor country like Malawi?

Well, let's think about Dedza, which stretches from the western border with Mozambique to the eastern side of this long narrow country, the southern part of Lake Malawi. (The map was produced by the famous Dedza Pottery.) 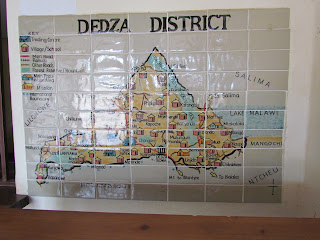 In Dedza district there are 208 public primary schools, with just over 105,000 learners (51% girls) and 1,520 qualified teachers (exactly a third of them women). That means that there is a pupil-teacher ratio of 108:1. Now, given that the retention rate from Standard 1 to Standard 8 is less than 30%, and hence that the smallest classes tend to be in St 7 and 8 (also because these are classes preparing for certification), that means that classes at the early years are much larger than 108, with the pupil-teacher ratio standing at 160:1.  Inevitably, schools in more 'prosperous' urban areas will tend to have smaller classes and schools in more remote and poorer rural areas will have larger classes. This results in some children in country areas trying to learn in classes of 200-300.

Another way of looking at class sizes is to consider how many classrooms each school has and whether there are enough for all the children in the school. Often the number of classes and the number of children within each class is determined by the number of rooms available. Dedza district has a pupil to classroom ratio of 616:1. These classroom will be the 245 permanent classroom structures. Many of the other classrooms in the 208 schools will be temporary structures, for example, mud, pole and thatch, an awning over part of the compound, or the traditional 'learning under the mango tree'. Don't regard the latter as romantic, even though such 'classrooms' make for some nice photographs. Outdoor classes mean uncomfortably hot environments, no learning when it rains, paper blowing away and constant distractions.

Providing seating and working space for children is therefore a challenge. Dedza has a ratio of 8 pupils for each desk. What this means is that the available desks are used by the older primary pupils, while the younger ones sit on the mud floors, or on stones. Sometimes children don't go out at break to play because they want to 'reserve' their 'seats' in the classroom. No wonder so many drop out, with twice as many girls dropping out in the first four years of school than as boys. Also no wonder why so many find learning difficult: only 3% of pupils in St 4 are competent in English and mathematics.

So many of the factors which make it difficult for children to learn and make them reluctant to stay in school are straightforward practical issues relating to accommodation and facilities. These problems relating to infrastructure and class size also affect the quality of the teaching provided. If you were a young teacher in the early years, just out of college at age 18 or 20, what skills could you bring to your work that would involve, motivate and stimulate the 200 children in your Standard 1 class? How could you carry out formative assessment? Would the ones at the back even be able to hear you? What about active approaches to learning? The only way you could cope would be to do the age-old rote-learning and copying down.

All these factors which influence education for the worse are present in Ugandan government-aided schools as well as Malawi's public schools - and no doubt in schools across the continent. We think that Uganda's pupil- teacher ratio may not be as high as Malawi's overall, but there are still plenty of schools with 150-200 pupils per class, particularly in northern Uganda, and with crumbling mud walls and no classroom furniture. One of the best contributions NGOs can make is actually to build solid weather-proof classrooms, as Softpower Education does in Uganda, though that also brings with it the problem that NGOs may just end up doing the government's job for it.

One positive aspect of education in Malawi is the network of Primary Education Advisers who are each responsible for monitoring and supporting 10-15 schools. In Uganda, Coordinating Centre Tutors employed by the Primary Teachers' Colleges carry out a similar role, though with far more schools within their patch (40 or so) and far more difficulties in terms of finding the fuel for their motorcycles to visit them. The arrangements in Malawi seem to work much better.

LCD's role in Malawi is principally within school improvement, helping schools to develop approaches to school performance review and school improvement planning. You can read about LCD Uganda's approach to school improvement in Helping communities to improve their schools: a photographic account of Link's work. LCD also provides training for headteachers on leadership and management and supports community approaches to improving health, depending on current and local priorities. It also sets up links between schools in Malawi and schools in Scotland. For example, Craighead Primary School in Scotland helped the community at Chikololere Primary School in Malawi build a new classroom block and sink a borehole. In the past, LCD has also run a Global Teachers Programme in in Malawi.

Well, what about seeing an actual school, then? We went to see Dedza Roman Catholic Primary School. Unlike in Uganda, where the mission schools were taken over by the government in the late 1980s, the churches in Malawi have held onto their schools, although they also receive government support. At this point I need to point out that our original plan was to visit a remote rural school where conditions would have been far more basic. However, we were caught out by the fuel shortage, so we visited Dedza RC instead, the school next door to the Link office, and very grateful we are to the headteacher and school community for arranging this at short notice. However, it almost certainly has far better buildings and facilities than most rural schools.

The school had been in poor condition until a couple of years ago, when it was renovated with (I think) diocesan and government funds. The buildings certainly look solid and weather-proof. The white lattice-work window bricks are distinctly Malawian. We saw them in school buildings in a lot of places. They let in light but are at the same time secure and keep out most of the heat. 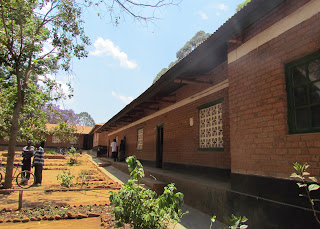 Here is one of the as yet unrenovated classrooms. 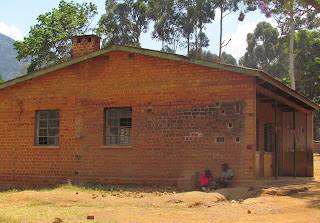 The purpose of our visit was to hold a meeting about some of the issues we were concerned with as part of our work, so we didn't spend time touring classrooms. This is not the place to report on the outcome of our meetings, except to note the healthy representation from members of the school community: governing body, parent-teacher association and the Mothers' Group, as well as members of staff. Mothers' Groups are a very positive development in Malawi. They provide support for girls to encourage them to continue with their studies and to deal with any difficulties they may have.

The school was very proud of its new latrines and hand-washing facilities, completed as part of its improvement plan and with a combination of government and community funding. 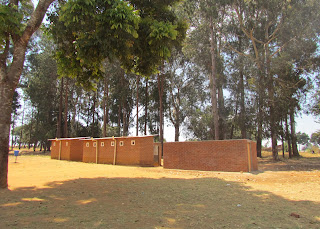 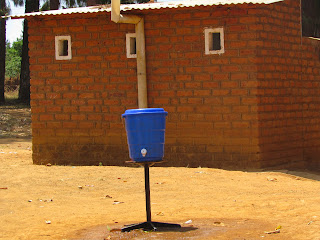 Children have plenty of space to play, but inevitably at this season, the compound is dry and dusty. Here some of Standard 1 are looking on curiously at their strange visitors when they really should have been on their way home. (Pupils in the early years have a shorter day than other classes.) 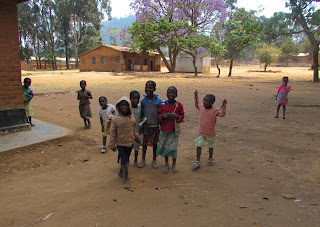 The school is fortunate to have a water supply, though it can be hot work collecting it. 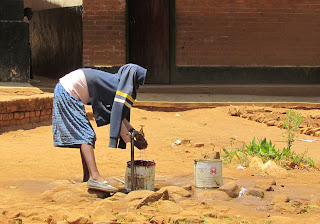 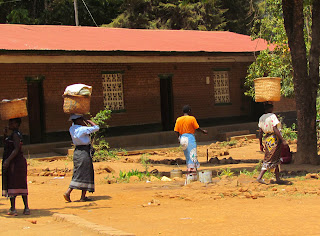 It has managed to build some good solid staff houses, just half a dozen though, not enough by any means for all the staff in the school. As in Uganda, staff houses are critical in encouraging staff to attend regularly and be on time. 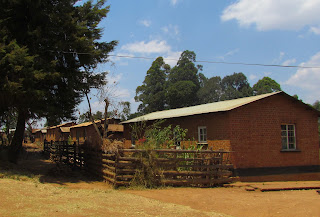 However, there are still not enough classrooms. Class 5c has to study under the mango tree. We certainly provided plenty of distraction for them that day! 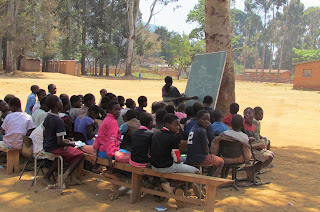 However, the children didn't have to put up for long with the disruption we caused. The school bell, an old hub cap, was struck and it was time for break. 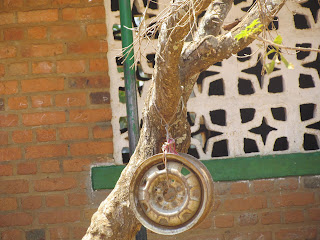 So that was our rapid and brief introduction to the Malawian education system. We could feel only admiration for the committed headteacher and staff and the support provided by the community at Dedza which enabled young people to receive an education, despite the practical challenges. We also admired the work done by district staff and LCD in bringing about improvement and raising standards in very difficult circumstances. We wish them the best for the future.

Posted by Elisabeth Ritchie at 9:30 PM