Some of the differences between Uganda and other parts of East and Southern Africa can be observed before you even land at your destination. We left Entebbe in the rainy season. The view from the airplane was lush, green and swampy. But then it's always lush, green and swampy. (Sorry no photo - on the other laptop!). By contrast, this is the view as we left Nairobi for Maputo and then Lilongwe, and it was like that all the way. Brown and dusty, with dried-up river beds. 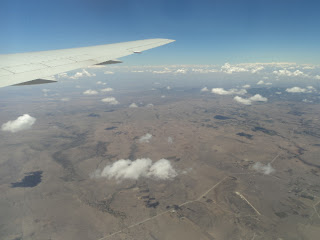 As we touched down at Maputo we saw nothing but a brown-ish haze. As we drew closer to the brown fields surrounding the airport at Lilongwe - Kamuzu, after President Hastings Kazumu Banda - we could soon see, however, that dotted across the brown were trees, solid semi-deciduous trees interspersed with glorious lilac jacaranda. The trees accompanied us as we drove into the city. We were told that the jacaranda were not at their best, and certainly the flowers were falling. However, to our eyes, accustomed to the tree-less squalour of Kampala, they looked wonderful. 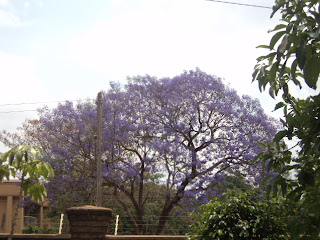 There were other immediate differences as well. The road from Entebbe to Kampala is as chaotic and full of potholes as all the other roads in Uganda. The road from Kamuzu airport to Lilongwe, on the other hand, is a broad two-lane highway, with smooth crater-less tarmac and carefully painted white and yellow lines along which cars travel at the speed limit, stop at traffic lights and always keep to the left-hand side of the road. It was astonishing! And, having travelled elsewhere since we arrived, I can vouch for the fact that the roads in Malawi put Uganda's cratered, surface-less dirt tracks to shame. City streets in Lilongwe even have approximations to pavements, or at least non-tarmacked sidewalks where pedestrians can walk safely. How different from Kampala where every available square inch is occupied by trading shacks and boda boda stages while pedestrians just have to take their chances on the road with motorcycles, buses and lorries. Here is one of the main roads into the city of Lilongwe. Unlike Kampala, the city has kept its trees. 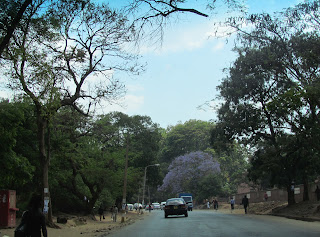 And here is the road round the corner from where we are staying. Not a car in sight! 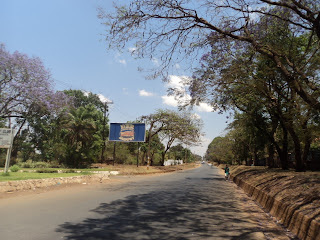 Mind you, Malawi does have a fuel shortage just now. Here on the left-hand side of the road is one of the queues at a petrol station near us. It extends a full street-length behind and curls right along the road in front, round the corner and into the petrol station. 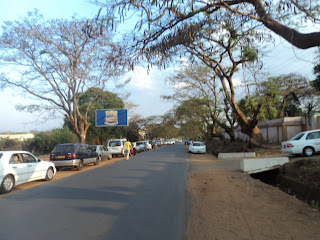 And here is another queue, taken from inside our car. 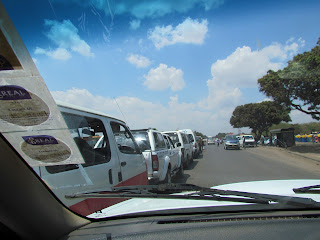 We are getting slightly nervous about the likelihood or otherwise of the taxi which is due to take us to Lake Malawi for our precious break, actually having enough diesel.

The two capitals even queue differently. Malawians wait patiently in line. Ugandans push in, overtake on the wrong side and barge in front. Can there be something like a national character? The unplanned sprawl of Kampala with its manic traffic and hour-long jams is so different from the laid back orderliness of Lilongwe.

Whereas Kampala goes back centuries (not the buildings though), Lilongwe was founded in 1975 when Hastings Banda moved the centre of government from the colonial city of Zombo to what was then just a small trading centre - a capital city built almost from scratch. We stayed in Area 3, near the Old Town - not that there's much that's old about it.

Astonishing to the traveller fresh from Kampala, Lilongwe - in fact, Malawi as a whole - has NO motorcycle taxis. No wonder the streets are so civilised. And those used to the rusty Ugandan deathtraps called matatus - minibus taxis - would be most impressed by the sturdy well-kept Malawian equivalents. 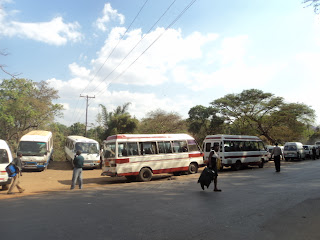 How can these differences be? Is Malawi a richer country than Uganda? Actually, no. The World Bank figures for 2009 indicate that Malawi had a gross national income (GNI) of $280. That's pretty low. Uganda, on the other hand, had a GNI of $460 - not a fortune, but, on average, a lot better than the income of the average Malawian. (In 2009, by the way, the GNI in the UK was $41,520.) One major difference, however, stares you in the face. Malawi's poverty is largely undiscriminating: pretty much everyone is poor. Uganda, on the contrary, is an unequal society where the rich flaunt their wealth. The ostentatious lifestyles of the privileged elite exist alongside manifestations of extreme poverty: lack of water, lack of sanitation, lack of schooling.

How, then, can Malawi afford proper roads while rich Kampalans drive their four-by-fours along rutted murram tracks? Perhaps it has something to do with how each country chooses to spend taxpayers' money. I have mentioned some of the most noticeable differences between the two countries. Here are some more. On Ugandan streets, you are surrounded by guns toted by militarised police and soldiers. Every major intersection in Kampala has its half dozen policemen, lounging around looking for trouble. Someone has to pay these men - the taxpayer. Let's think about public services and their priorities: roads or guns? A difficult decision, if you're a Ugandan.... In addition, Uganda has streets full of armed security guards, many of them employed by companies headed by well-known politicians. One day a security guard, the next day a militiaman. Let me tell you, it is very very strange to be walking down the streets of Lilongwe with not a gun in sight. I have seen not one since we arrived. The police don't seem to be armed. Stuart saw a couple of soldiers with weapons. And that's it. No wonder it's so laid back!

Anyway, what does Lilongwe look like? Not much different from any town in Africa. The traditional Asian shopping area of Old Town looks as shabby as most. 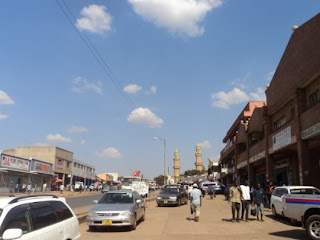 The mosques are impressive, though. 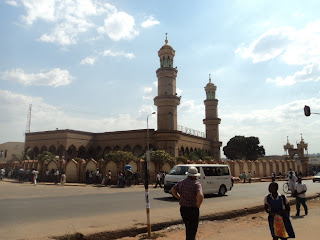 There are still plenty of shalwar chameez around, but other remnants of India look a bit tired. The lettering on the arch below indicates that this was once the entrance to the Indian Country Club. 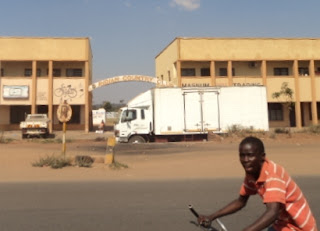 As everywhere else in Africa, it is the South-east Asians who are doing most of the business these days. The Chinese, of course, you expect to see. 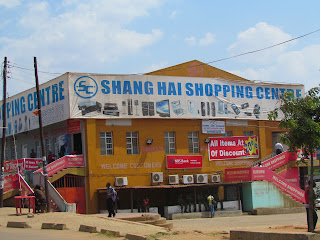 However, Lilongwe is a city filled with Koreans. The place where we stayed is the Korea Garden Lodge, bizarrely. And it is packed - with Koreans, but also with lots of NGO-types, among whom, I suppose, we must count ourselves. For Malawi, like Uganda, has plenty of what Paul Theroux in one of his sourer moments called 'the agents of virtue'. The streets are full of Korean businesses, but for the first time ever I saw a dozen representatives of a Korean  charity working in food security. For Malawi has some food shortages - though the government also has huge silos of maize with which to feed its people when things get really difficult (unlike Uganda). 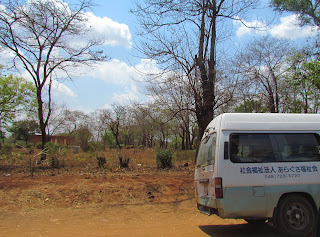 Other bits of Lilongwe could be anywhere in Africa. Here is the river, where it runs through the centre of Old Town, its banks lined with people washing, cleaning their teeth, doing their laundry, collecting water. 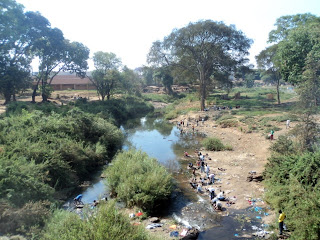 And right across from the Chinese discount stores is the market. 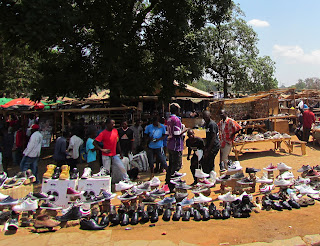 We were quite shocked by this market when we walked through it. We are used to Ugandans selling heaps of horrible European cast-offs. Here in Lilongwe we had to run the gauntlet of lines of people selling one shirt, two pairs of trousers, a pair of shoes - for what seemed miles. The saddest was the eleven-year old boy selling what was clearly his one spare shirt. 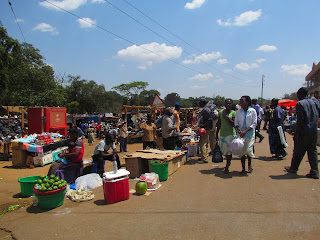 There was the usual jumble of produce brought in from villages and heaps of Chinese plastic-ware.

However, modernity has reached Lilongwe. Round the corner from where we are staying is a shopping centre with the South African stores Game and Shoprite. Of course, Kampala can boast scores of such stores, including the two named here, and rather grander than the Lilongwe equivalent. Lilongwe is smaller and without the wide range of good restaurants and other facilities which middle class Kampalans enjoy. However, it does have a good golf course, as you will read in a later post! 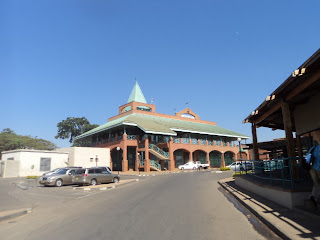 And there is something vaguely familiar about the Spar supermarket in the centre. 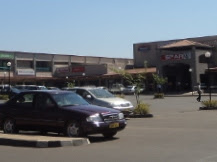 So that's Lilongwe - not all of it, of course, just the bit where we are staying. We haven't had time to see the sights like the Lilongwe Nature Sanctuary, the Hastings Banda mausoleum or, indeed, much of Capital City from which the country is governed. However, we have liked what we've seen of Lilongwe so far, with its unpretentious modesty and quiet good manners. 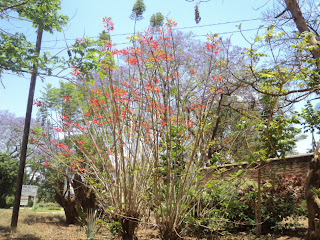 Posted by Elisabeth Ritchie at 9:33 PM