The weather in the west was Scottish in its variability. Fort Portal greeted us with pouring rain and, if not exactly freezing temperatures, pretty cold ones all the same. The town is, after all, the same height above sea level as the top of Ben Nevis. The chilly experience would be good preparation for our return home, we thought bravely, as we huddled inside our cardigans. Well that was me. Stuart has a Scotsman's constitution and registers no temperature as cold if it's above minus 20. Oh, and he doesn't wear a cardigan.

Still, the rain came down in torrents. We sat it out over a cup of coffee in the Mountains of the Moon Hotel where we had taken shelter, looking out over the sodden - but beautiful - gardens. 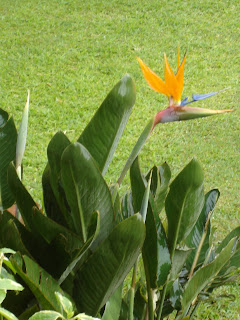 Photos do not begin to reflect the intensity of that kind of rain. Fort Portal town was already flooded from last week's rain. Half the market stalls had been washed away, the small traders losing all their goods, and the river had spread out across the lower reaches of the town. The hotel, however, was on the top of a hill, among all the dilapidated ex-colonial bungalows, so the garden was soggy but not under water. 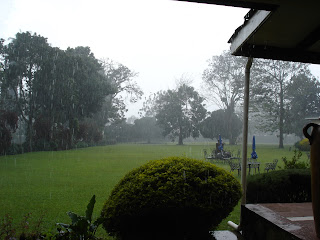 The next morning, however, was glorious. As we drove south, we followed the line of the Rwenzori Mountains. They rose dark on our right, as we gradually descended to Kasese, but with no sparkling snow, alas. You need to penetrate the peaks more deeply than we did for that. Still, they were stunning nevertheless. Margherita (5,109m), on Mount Stanley, is the third highest peak in Africa after Kilimanjaro and Mount Kenya, both extinct volcanoes.  The Rwenzoris rise straight from the Rift Valley floor. 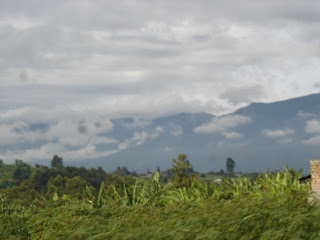 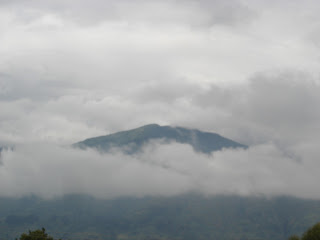 We've usually had quite misty views of the Rwenzoris, but here they were rising majestically above the clouds. As we reached Kasese, the clouds lifted and we had clear views across to the foothills. 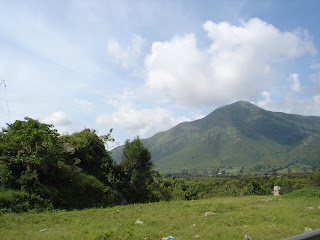 However, our trip south was not to view the landscape, beautiful though it might be. No, we were visiting the not-too-scenic town of Kasese. Our Farewell Tour was to start with Glorious Preparatory School (GPS), one of  the schools supported by the Uganda Schools Trust  (UST), a small charity in the north-east of Scotland. 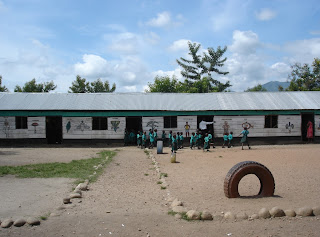 The headteacher of GPS appears on the cover of the school improvement guides we have just published, so one of the purposes of our visit was to drop off a set of the booklets. We are quite proud of the cover of the Leadership guide, so here it is for you to enjoy. A lovely picture of caring leadership in a well-managed school. 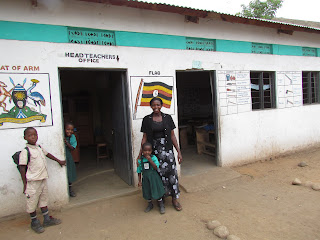 As usual, our visit caused much excitement. 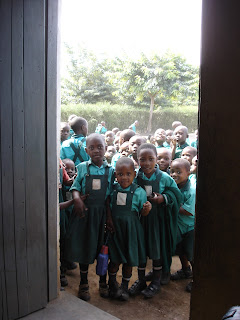 As did our car, especially when the children caught sight of the balls and hula hoops secreted in the back, to be revealed and presented later on. 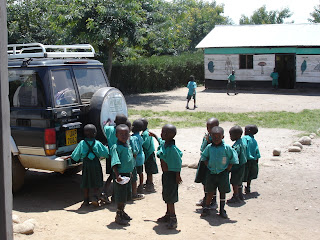 We saw the balls left on previous occasions being put to good use. The girls had turned down the suggestion of a volley ball team. They wanted to play football! 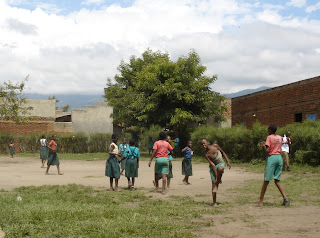 Though most of them played barefoot, you may be able to see that the goalkeeper (the tall girl nearest to the camera) had managed to borrow one shoe for her right foot.

The boys played with equal energy, but with a similarly idiosyncratic approach to sports kit. Long socks appeared to be de rigeur for a couple of them, but without any shoes or boots. (Almost all the children do have shoes - one of the school rules which protects them from jiggers - but they often prefer playing in bare feet.) Here a young Zachaeus makes sure he has a good view. 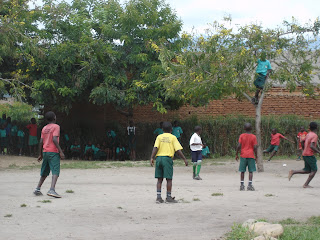 Not all the spectators were thrilled by the action. Some were more fascinated by the visitors. Our hair, skin and, for some reason, my sandals were particularly interesting. 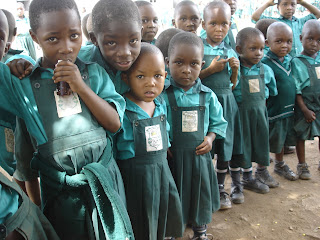 But there were other distractions as well: acrobatics as well as practising newly acquired writing skills,

Team photos were required of course. Here the girls... 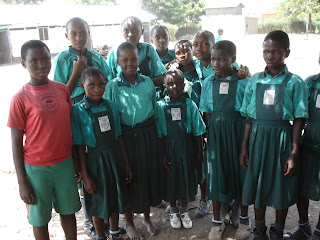 ...and here the boys, with rather more sense of drama. 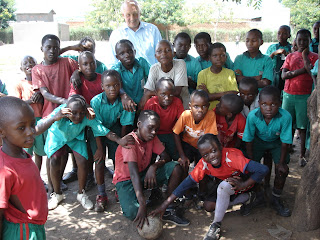 The roll of GPS continues to rise. In fact, Baby Class (first year of nursery) now has two streams. The school still stops at the end of Primary 5. Providing classes at P6 and P7 requires considerable investment and planning. The school does not have the classrooms, resources or teachers just now. Most families have managed to pay school fees, but there are some heart-rending stories.

The director told us that increasing numbers of children are being abandoned by their parents because of the harsh economic conditions. He gave the example of one family whose father had disappeared. The mother then also left, presumably to look for work. The children were left by themselves with no means of support except for an occasional Shs20,000 (£5) sent by their mother. More and more children such as these come to school hungry, or miss school because they are hungry and don't have the energy to come. Anyway, they need to use their school time to try to scavenge food from neighbours or elsewhere. As the director said, the school is acting as parent to children such as these. There is no social safety net in Uganda. 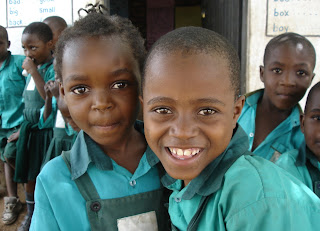 You may think, looking at these lovely children, almost all in uniform, that this is a school for comfortably-off families. Not at all. The children's uniform is their only set of clothing. As in the UK, wearing uniform reduces, but does not eliminate social differences. The headteacher had tried to introduce T shirt and shorts for sports, with the aim of encouraging parents to wash the everyday uniform on one day per week. However, that attempt failed as few of them could afford two sets of clothes. Children will probably wear their uniform at the weekend and during the holidays, though parents sometimes find a ragged adult T shirt for them to wear.

However, ours was an upbeat visit. The school has made important improvements since we were last there. The latrines are now finished - for boys, girls and staff. Here the support of UST has been invaluable. You can see the latrines built high above the ground (to provide the necessary 'drop') and with the mountains just peeping through behind. 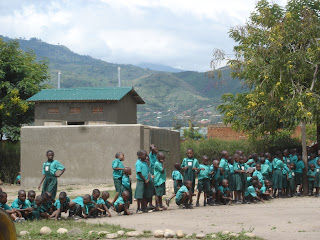 However, the school still has to make some other major improvements. The Ministry of Education and Sports is threatening to close all schools which are not at least licensed, if not registered, before the beginning of next session (February). To be licensed, schools need 'permanent' buildings. Wooden buildings do not count as permanent, apparently, and there are arguably significant safety issues relating to them. GPS has also been told its classrooms need proper floors, not just hardened mud. Walls should be plastered as well. Unfortunately, nearly all the classrooms at GPS are wooden, though they are in much better condition than classrooms in most schools we visit. Doing all this work will be a higher priority than extending education to the upper primary years or, indeed, putting in place a feeding programme.

However, it was time for us to go. Stuart spoke a few encouraging words to the children before they scampered home. I addressed the staff in similar fashion over a generously provided lunch. 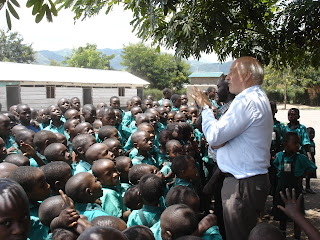 As we drove back up the road to Fort Portal, the skies ahead of us darkened over the mountains and threatened rain. 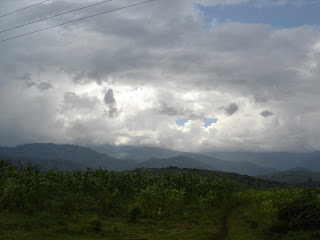 Time for the market to pack up. 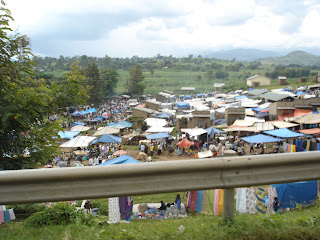 and travellers to find shelter. 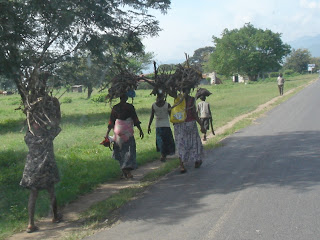 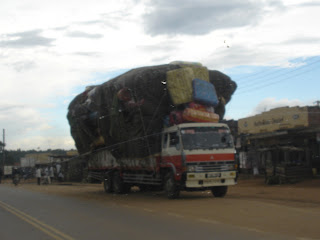 We made it before the thunder growled and lightning shot across the sky. 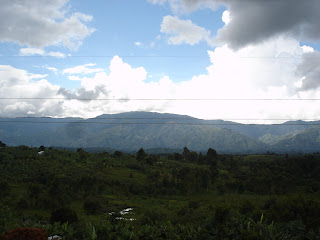 However, we knew that the next day would dawn bright and clear for us to make our journey back to the stresses and strains of Kampala, feeling rather more refreshed than we did when we set off. And we were right. 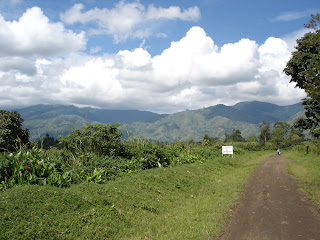 Glorious Preparatory School: serving the community in Kasese
Posted by Elisabeth Ritchie at 5:48 AM