The last month or so has been spent catching up with friends and family, unpacking boxes and trying to make sense of our bank accounts, so no time to write - a situation which has left me feeling bereft. However, our heads now seem to be above water - for most of the time anyway - so it's back to the laptop like a farm animal at last let out into the fresh green spring grass.

Our last 'trip' was to Mabira Forest, with our good friend Pauline. We stayed at Rainforest Lodge, just a couple of miles off the main Kampala to Jinja road, but a haven of peace and calm. Our visit was supposed to be our treat to ourselves at the conclusion of our last session of active work - a national conference for the great and the good from across the country. However, this being Uganda, the conference didn't happen. Nevertheless, our booking at the lodge remained. Tant pis! We would go there and enjoy it anyway.

We had been to Mabira before, a day trip with a walk. We had, of course driven through one corner of it many times on our way to Jinja, for Mabira is the nearest 'park' to Kampala, about 50 kilometres away. Although tropical forest, it is not the drippy steamy sort, for this is East Africa, not the Congo. Mabira reminds me of the light-filled woods back home: Sherwood Forest and, less romantically perhaps, Sandall Beat Wood in Doncaster, a town where I spent my teenage years. The difference, of course, is that most of the trees in Mabira are twice or three times the height of those in Sandall Beat. You also don't get many red-tailed monkeys in South Yorkshire. 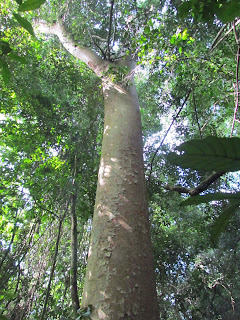 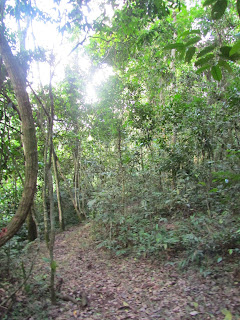 Those of you who, like me, enjoy facts, might be interested in  the number of plant and animal species in Mabira: 312 tree and shrub species, 199 species of butterfly, 287 species of birds (about 30% of the country's bird species) and 20 or 30 small mammals including leopards, antelopes, porcupine and monkeys.

Don't get too excited at the prospect of stupendous animal photos in this post. The leopards are nocturnal, the antelopes are shy, the porcupine stay in their holes during the day and attempting to photograph monkeys and birds in thick woodland is a thankless task. Not only do they keep bouncing and flitting around, they also keep hiding behind the foliage. Elephants and buffaloes are sadly extinct in Mabira and of the Grey-cheeked Mandabey, we saw not a whisker. However, here below is a heavily-camouflaged Red-tailed Monkey peering curiously at a clumsy White-faced Intruder. 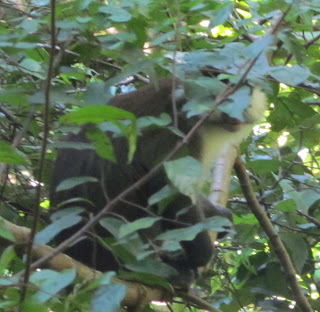 A Black-and-White-Casqued Hornbill hides behind a branch, beak to the left, tail to the right. 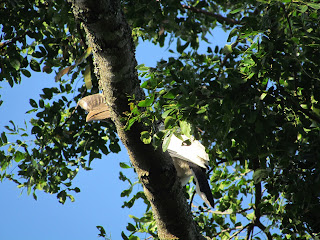 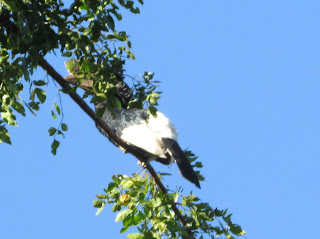 A porcupine's front door has no knocker to announce our presence. 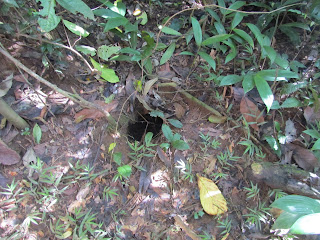 I did, however, manage to get some impressive pictures of disembodied tails. 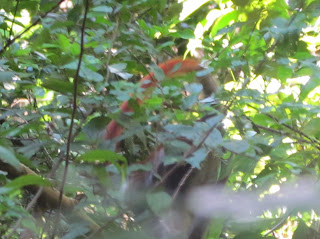 At Rainforest Lodge, one is surrounded by trees. They loom over the restaurant and cabins as if resentful of this intrusion into their territory. 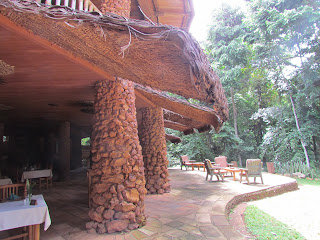 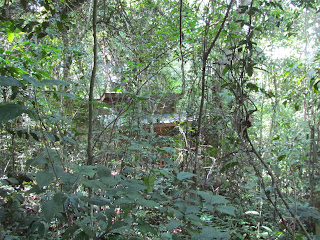 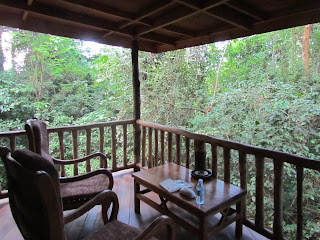 As you sip your drink on the terrace or read your book on the verandah, every so often you spot a branch waving wildly. Suddenly there is a flash of black and white as a monkey swings giddily on a liana or hangs momentarily on a thin branch before somersaulting to its landing far below. We didn't manage to take any photos of the Great Blue Turaco  though we could hear their loud cawing and the heavy flapping of their wings as they swooped through the canopy. So, here is one we took earlier at Ndali Lodge in western Uganda, just so you can imagine what they would have looked like if only we'd seen, not just heard, them at Mabira. 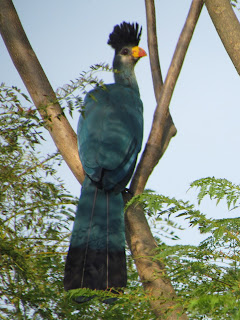 I'm afraid you'll also just have to be satisfied with some rather fuzzy photos of Red-tailed Monkeys, not up to our usual standards, I'm afraid. 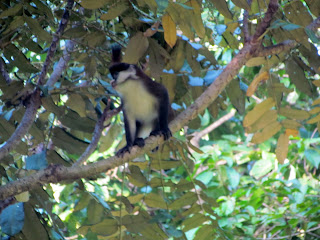 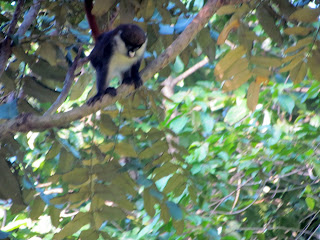 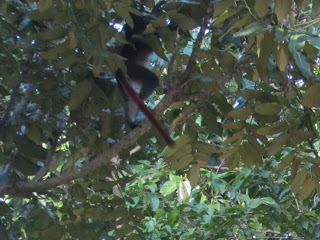 All walks through Mabira Forest must be taken in the company of a ranger from the National Forestry Authority: too many pythons, puff adders, vipers and mambas for casual trippers to fall over, though they all seemed to have quickly slithered off at the sound of our approach for not one did we see. Be reassured, the snakes do not make it to the lodge itself.

As always, our ranger was a mine of information. We learned about 'strangler' trees which grow round, and squeeze to death, their reluctant hosts. Some trees have 'learned' to grow huge thorns to discourage animals like monkeys from eating their fruit. 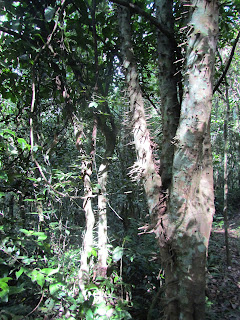 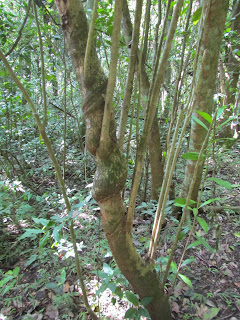 The huge mahogany and ironwood trees are impossible to photograph, but their roots give you some idea of their overall height. 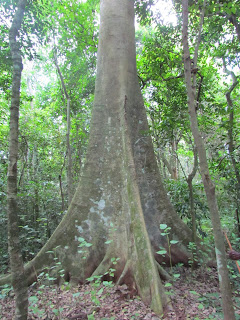 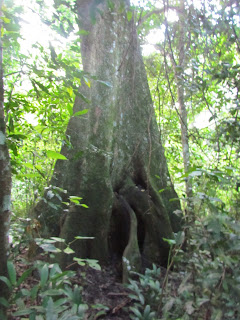 The Forest is used by local villagers for fuel, food and medicine. Here the slashes in the bark show where strips have been removed to be ground and made into local remedies. 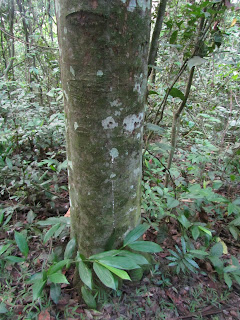 The last of the original inhabitants, a tribe of pygmies called the Batwa, died out within the last twenty years. One survivor remains, working at the lodge. Hazy memories of the pygmies have been retained in stories of 'ghosts', small people with large heads, called the Nakalanga whom the locals propitiate with offerings of food and drink. Much of the lore of the forest died out with the pygmies. However, some old beliefs remain, including belief in the powers of the tree spirits to whom childless couples present gifts. 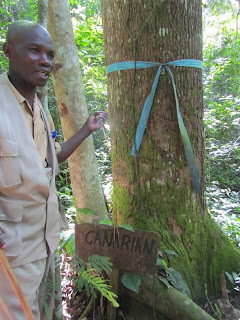 Many of the current inhabitants of the forest have moved in from elsewhere. They include refugees from the Congo, immigrants from neighbouring countries like Tanzania or Ugandans from beyond Buganda, the kingdom in which Mabira lies. While many are encroachers, others have been given their land through formal - if not necessarily legal - means.

While in Mabira, we heard that the President's plans to hand over part of the forest to his friend the sugar planter, Mr Mehta, and SCOUL, the Sugar Corporation of Uganda Limited, seem to have been forgotten about. It is said that the reason behind the plans was the need to pay back huge debts incurred when President Museveni borrowed large sums from Indian businessmen at the time of the last election. So, acres of ancient forest were to be felled to pay for brown envelopes, salt, sugar and soap. A similar proposal five years ago led to riots and bloodshed. Our guess would be that everything will quieten down only for the forest to be gradually nibbled away and before anyone realises it, the sugar growers will have had their way. A similar plan is proceeding in Amuru, Northern Uganda, where publicly-owned land is being transferred to the Madhvani family for sugar production.

There are ecological reasons for Mabira Forest to be preserved as it is. The forest plays an important role as a water catchment area for Lake Victoria and the River Nile, contributes to rainfall in the surrounding area and processes waste gases from the atmosphere. It also stores carbon worth $315m per year. Cutting down trees could worsen climate change and threaten the water reserves in the area, which are already falling. President Museveni, however, is not the only leader to have used the forest for his own purposes. Idi Amin encouraged people to clear trees and build settlements. Indeed, when the British first gazetted Mabira as a forest reserve in 1932, they handed over large chunks of land to individuals.

So, the survival of this last remnant of ancient forest in central Uganda remains at risk. In the meantime, most of its current inhabitants appear to remain oblivious. 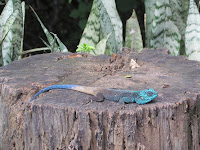 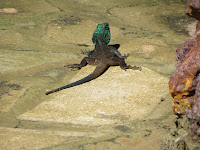 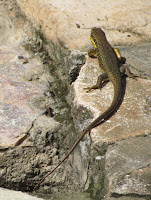 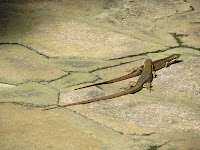 As for us, we came to Mabira Forest to rest and that is exactly what we did. Gazing up at the bright sky through the curtains of lianas, it is difficult to believe that anything could change. 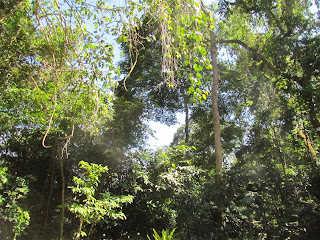 Posted by Elisabeth Ritchie at 6:07 PM